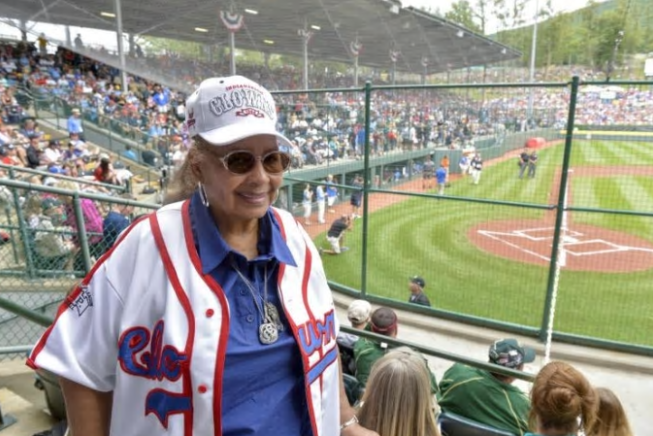 Mamie Johnson stood 5-foot-3, yet the size of what she accomplished is immeasurable. As a woman playing professional baseball in the Negro Leagues, she was given her nickname by an opposing batter who claimed she wasn’t any bigger than a peanut.

Johnson passed away at the age of 82 earlier last week. She was one of three women to play in the Negro Leagues, and the only one to pitch.

“She could play,” said Bob Kendrick, president of the Negro Leagues Baseball Museum. “She had a strong right arm.”

Johnson not only dominated on the mound, where she was 33-8 as a pitcher, she also played the field as well for the Indianapolis Clowns, the team that Hank Aaron played for before joining Major League Baseball, while putting up a career .273 batting average.

She once said that her strong arm was the result of throwing rocks at crows and knocking them off of her grandparent’s fence when she was a kid.

“I played sandlot ball for quite a while, and there was a gentleman who saw me play quite often,” Johnson said. “He approached me and asked if I wanted to play pro baseball, and I told him, ‘Yeah.'”

The South Carolina native was denied an opportunity to try out for the All-American Girls Professional Baseball League, which did not allow black players.

But that didn’t stop her from chasing her dream, and her talent eventually caught the attention of a former Negro Leagues player in Washington, DC, who told her that she had the talent to play pro ball with men.

She was given a tryout with the Clowns, and was added to the roster the next day after making an impression on the team’s manager. She made her pro debut in 1953 at the age of 17.

“I learned a great deal from some of the nicest gentlemen [who ever] picked up a ball,” said Johnson. “It was a wonderful thing. They were gentlemen. I was pleased to be treated like a lady at all times. I can say I had 26 brothers, and they were so nice.”

After baseball, she worked as a nurse for 30 years, but the passage of time did not dim what she accomplished as a woman playing pro ball in a man’s sport. Last November, a bronze bust of her was commissioned and is now on display at the Negro Leagues Baseball Museum. It is scheduled to become part of a larger installment called “The Beauty of the Game”, which will celebrate the women who made their mark on the diamond.

Her story is recounted in the book, A Strong Right Arm, written by Michelle Y. Green.

During her playing career, Johnson said the legendary Satchel Paige helped her perfect her curveball.

“Tell you the truth, I didn’t know of his greatness that much. He was just another ballplayer to me at that particular time,” Johnson once told The State. “Later on, I found out exactly who he was.”

“I got to meet and be with some of the best baseball players that ever picked up a bat, so I’m very proud about that,” she told NPR.

Johnson was the last living woman to have played in the Negro Leagues. Her teammates in Indianapolis, Toni Stone and Connie Morgan, both died in 1996.

“We lost a voice with her passing, but her legacy plays on at the Negro Leagues Museum,” Kendrick said. “Her’s is a story of hope, a story of perseverance and an example of how to overcome adversity and achieve your dreams.”