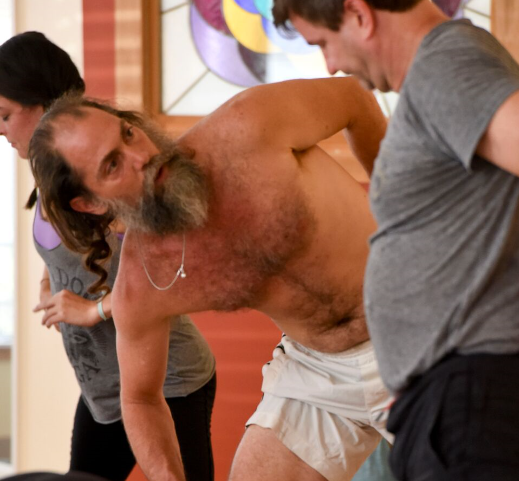 Renowned Birmingham yoga teacher Akasha Ellis knows about journeys, both physical and spiritual. At age 16, he set out for India on the advice of his guru.

“I left [Virginia] as a senior in high school,” he said. “I did not graduate. … I was a little troubled as a youth, and I think that was his way of giving me advice. … He said, ‘You should go and see what else the world has going on.’ I went, and I stayed and studied under [a yoga master] for a year.”

Now many come to study under 49-year-old Ellis, owner of Birmingham Yoga in Forest Park and director of the facility’s teacher-training program.

Ellis absorbed more than just the teachings of yoga while in India; he also learned lessons about gratitude.

“It was a way of becoming grateful for the things we take for granted in the U.S.,” he said. “[There is extreme] poverty in India, and they still have gratitude when they have nothing. As a young man, you’re concerned about your car, your girlfriend, what party you’re going to go to. [People I saw in India] didn’t have access to drinking water, didn’t have shelter. [My time overseas] put everything in perspective. It gave me a different outlook on what to complain about.”

After eight years of living and teaching in India, Ellis returned to the U.S. in 2000 as a single father with a broken heart.

“I was going through a divorce, hurting,” he said. “I needed to heal. I started teaching at the Golden Temple in Birmingham in 2000.”

Teaching Ashtanga and Kundalini yoga classes helped him deal with the pain: “It doesn’t get rid of the pain, per se, but it brings a union with you and whatever your circumstances are and decreases the separation, which is what the pain is—pain is separation.”

While at Birmingham Yoga, Ellis helped create the Yoga Alliance 200-hour teacher-training program, which has developed several practitioners. He also offers several retreats and workshops and teacher trainings throughout the year.

One of the main things Ellis encourages is focus.

Once focus is achieved “that brings union, because you’re merging with whatever that focus is,” Ellis said.

“It encourages us to form a relationship with our thoughts of fear so we can begin to embrace them, love them, and give them peace versus trying to inoculate them or numb them out.”

Many people don’t know why they’re attracted to yoga, but Ellis offers an explanation.

“There’s a reason why I think they’re drawn in, and that’s because there’s a lack of communion in our society now,” he said. “There’s a separation from social interaction because of technology. Great emphasis is placed on external stimulation, whether it’s via cell phone, email, or social media. … There’s such an extension between ourselves and nature and our communities because we’re always on the go. We start to look for peace externally through our devices and through approval—likes, shares, and calls.”

People are always “looking for our next hit “of technological stimulation, Ellis said.

“We get addicted to that hit,” he said. “So, when you come into yoga, you pinpoint, you focus on one object, you’re no longer getting constant stimuli. You’re getting only one hit, and that brings a sense of peace to the mind and the nervous system, which puts you more in touch with your spirit, your heart, your soul.”

“As you focus on one object, settle your breath, settle the mind, you can become more aware of what you need to work on and where you need to heal,” Ellis said. “That’s why yoga gives people a sense of peace.”