Recently, on a frigid morning in downtown Birmingham Marco Morosini was inside the Birmingham Jefferson Convention Complex with dozens of other volunteers.

Never mind that it was Christmas morning. Morosini, owner of Silverton Café in Forest Park, his 13-year-old daughter and several of his employees were inside the BJCC warming station feeding the homeless and volunteering their time to assist the less fortunate.

Morosini is founder of Heart to Table, a program that provides hot meals for the homeless on freezing nights when warming stations at the BJCC, Boutwell Auditorium and other locations are opened by the City of Birmingham.

Becoming homeless can happen to anyone at any time, Morosini said.

“I want to make sure that people understand that they are people just like you and me, it is easy to lose everything and end up on the street,” he said.

While participating in Leadership Birmingham three years ago, Morosini persuaded his classmates to join him in creating Heart to Table to address a situation the city faces every winter.

“At the end of the six months in the program you’re supposed to work on a project to present, and it’s a group project,” he said. “The group picked my suggestions because the amount of people it touched.”

With the help of Leadership Birmingham, several restaurants formed a group committed to providing a network that the city can call on when the need for food arises when the city opens warming stations.

Morosini said he wants customers to know about the program. 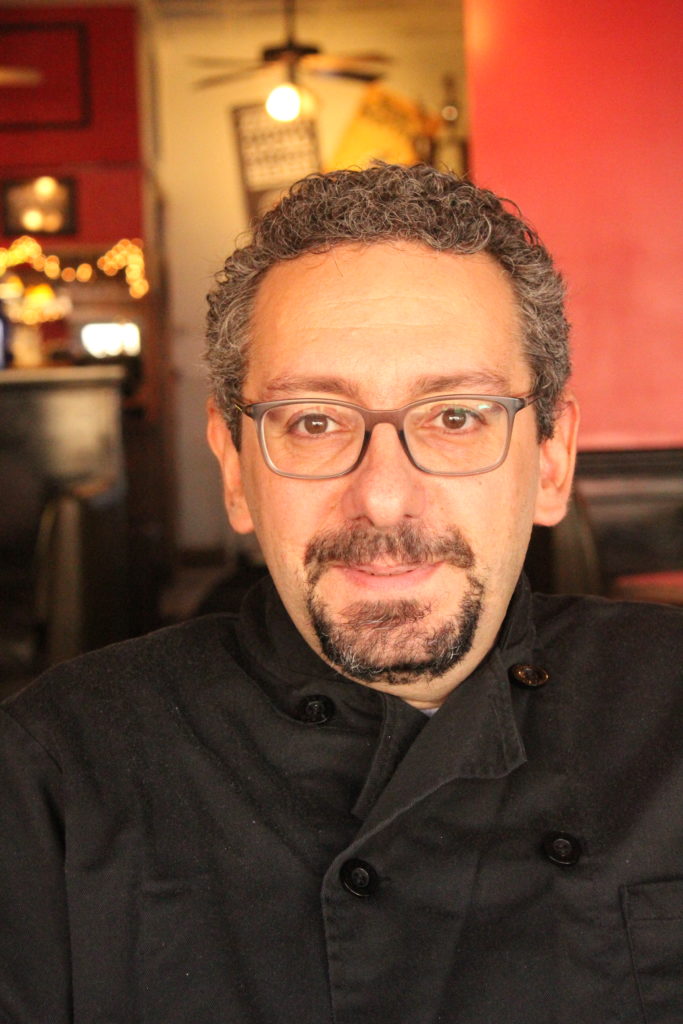 “One day it could be me and you down there,” he said. “We’re just fortunate. But the homeless do not deserve second class food.”

The restaurants partner with Urban Food Project with REV Birmingham, Morosini said. “It connects local farmers with the restaurants. On Christmas Day we served 70 pork chops from Fudge Family Farms in Madison, AL. We had two big containers of cooked collard greens and cabbages from farms in this state. It’s nothing more beautiful than seeing farmers supporting the homeless.”

Opening the warming station and other shelters can be expensive, he said.

For example it costs $7 for each blanket because each has to be sanitized each night, washed, individually wrapped and put back, he said. “Think about 300 people (for one night), being open for three nights it becomes $2,100 times 3. Plus, heat, police, having an ambulance there. That’s a lot of money.”

During the heavy snow day that blanketed Birmingham in early December, Morosini said Heart to Table partnered with Shipt, which donated protein bars, cereal bars and snack bars to the homeless.

The next goal is to “have the restaurants understand that some homeless are diabetic.”

“I don’t tell them what to cook by no means,” he said. “I tell them to be mindful that some are diabetic. If a restaurant makes something I will take what I can, but we do try to consider this.”

In the first three years, over 5,200 meals have been delivered and it’s not just the restaurants, he said.

“As an owner of a restaurant involved in the community, I reach out if I need to and the support from these areas has been overwhelming,” he said. “When it snowed I reached out to residents asking for toiletries and coats and gloves, I had to do two trips to downtown because of the community’s generosity.”

Born and raised in Bergamo, Italy, Morosini first started working in restaurants to earn money to buy a scooter.

“We didn’t have much money growing up, so when I started the equivalence of the U.S. high school, I asked for money to buy a scooter to go back and forth to school,” Morosini said. “[My dad] said, ‘I don’t have it, but I’m going to find you a job and you’re going to earn your own money.’ And the job was to work in a restaurant at night. I enjoyed it to the point where I dropped out of school and of course, the typical reaction from parents, ‘you’re never going to go anywhere without a piece of paper.’”

Morosini worked at different restaurants around Italy, and wanted to learn how the French ran their restaurants. He moved to Paris and started at the bottom of a four star restaurant. The bottom meant polishing the lowest rungs of the stair banisters. Once mastered, he could move up in ranks.

He went to another restaurant, one of the top five in Paris, where he became head server.

“Before I left Paris, I wanted to show my dad where I was working,” Morosini said. “I was at one of the best restaurants in Paris. I was about 25 years old.”

After Paris, he came to the United States to learn the restaurant business and got his start and eventually became general manager at Grand Café in the Hotel Monaco in San Francisco.

As he was about to accept a job in Australia Morosini met his wife, Elan, and remained in the United States.

Morosini, now 44, has been the owner of Silvertron Café for 10 years and restaurant has been opened for 32. Silvertron is named after one of the first TV brands to come out after World War II and half of the restaurant was the first Silvertron TV store to appear in the area.

Silvertron is more than just a restaurant in the community. It hosts several monthly events. One is Third Friday in Forest Park & Tour de Loo, which is held every month. Area shops and galleries stay open late and offer specials, and local artists compete by creating art installations in participating businesses’ bathrooms; the public is encouraged to “tour the loos” and enjoy these unique works.

Another event is the Drag Brunch held the third Saturday of every month. Some of the area’s top drag performers put on a show while attendees have breakfast.

So after traveling over the world and working in some of the top restaurants, why settle in Birmingham?

“My wife grew up here,” he said. “We lived in Florida at the time and (visited Birmingham) to announce that my wife was pregnant, and my father-in-law mentioned that he (was ill). So, we decided to come to Birmingham so my wife could finish up her pregnancy and my father-in-law could make sure if he needed help, we were there to help out, and 14 years later we’re still here. It’s a great deal when you have free babysitting.”