Dwayne “Big Daddy” Thompson is from New Orleans, and food, flavor and seasoning have been part of his life since he could remember.

“The first place somebody took me to eat [in Birmingham] was a chicken spot,” he said. “I grabbed the chicken, took a bite, and said, ‘This chicken doesn’t have any seasoning.’”

When he was told to ask for the seasoning, he replied: “You don’t ask for seasoning where I’m from.”

When it comes to his food, Thompson said he is “seasoning oriented.”

“People think Cajun food has to be hot,” he said. “It has to be well-seasoned. I’m a man of flavor. Even my sauce, it’s a New Orleans original sauce. New Orleans is known for many things, many flavors, but there is no known world-renowned barbecue person from New Orleans or Louisiana. I’m looking to be that guy.”

Thompson is the owner, operator, innovative chef, and sauce creator of Big Daddy’s Sauces LLC. His products can be found in Piggy Wiggly and Western grocery stores throughout the Birmingham area, as well as Buck’s Pizza in Alabaster, Green Acres restaurants, and 17 stores in the state of Louisiana.

On Saturday, March 24, he will host “So You Think You Can Cook?”—a chili, chicken, and rib cook-off that will benefit the National Association for the Advancement of Colored People (NAACP) scholarship fund and the Lupus Foundation. Local celebrity judges will determine the winner, and Lady Woo of 95.7 JAMZ will host the event, which will be held in the 300 block of 16th Street North. 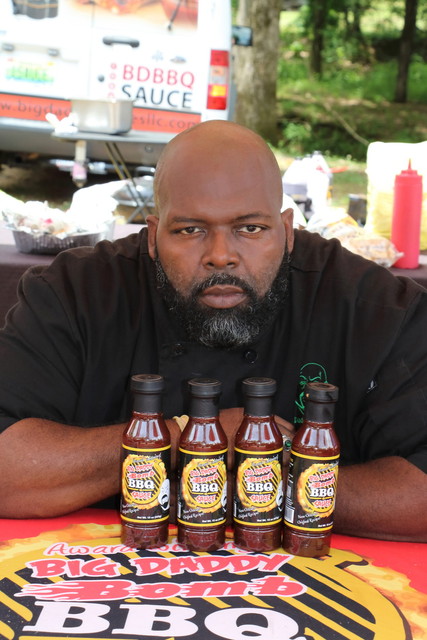 Big Daddy Bomb BBQ Sauce has been manufactured for two and a half years, but the recipe has been “played with” for years, Thompson said.

“I’ve been cooking since I was six years old,” he said. “My mother worked two jobs to put me through private school in Louisiana, and she used to come home tired. To do my part to help out, I started cooking. I cooked breakfast. I made lunches for her, small salads. That way, she didn’t have to come home and do that stuff. It grew from that.”

Thompson does community relations for the city of Birmingham and caters on the side. Every second Saturday he is at Ghost Train Brewery on the Southside from 3 p.m. to midnight, and every third Saturday he’s at Piggly Wiggly in Bluff Park from 11 a.m. to 7 p.m.

He never considered going into business until … “I was cooking outside a club one night, and this man came up to me and said, ‘Man you need to put this stuff in a bottle.’ It was 3 a.m. and he was drunk, so I didn’t pay any attention to him,” Thompson said. “The very next week I was cooking again, and another dude came up to me and said, ‘I don’t know what you’re waiting on. You need to bottle this stuff.’ So, I said ‘OK, Lord, I hear you.’”

The timing couldn’t have been better. To get started, Thompson needed a manufacturers’ certificate.

“In Alabama, there used to be two classes twice a year, but now they have only one,” he said. “I called and registered for that class the day before it closed. Knowing me, if I would have had to wait a year for that class I probably wouldn’t have done it. That put it in perspective. That was my affirmation. Here we are now in stores and hosting our first cook-off.”

Growing up, Thompson had always been known as “Big” something—“Big D,” “Big Heavy”—so he decided to name his sauce “Big Daddy.”

Thompson came to Birmingham after Hurricane Katrina in 2005 and temporarily lived at the Residence Inn on Highway 280.

“That put my children in Inverness [Elementary School], and the education they got was incredible,” he said. “There was one class with 24 kids, a teacher, a teacher’s aide, and eight computers, and they were learning a foreign language.”

One day, there was an argument about college in his daughter’s class; she was 8 years old at the time.

Where he is from, college was often an afterthought: “[The mindset was] ‘Let’s get you out of high school, and then we’ll talk about it.’ But here it was completely different,” he said. “Eight-year-olds were arguing about where they would go to college. The mindset was different.”

The quality of education his children were receiving at their elementary school was equivalent to a private school education in Louisiana, so he and his family decided to stay in Birmingham.

“Sometimes you have to put aside what you want and … sacrifice for your kids,” he said. “We found a house in Alabaster. Now, one [of my children] is at Alabama Agricultural and Mechanical University, and one is at the University of Montevallo.”

The cost to enter the cookoff is $50 (contestants can work in teams), and the grand prize is $200, a trophy, and bragging rights. For more information or to register, visit www.bigdaddysaucesllc.com.