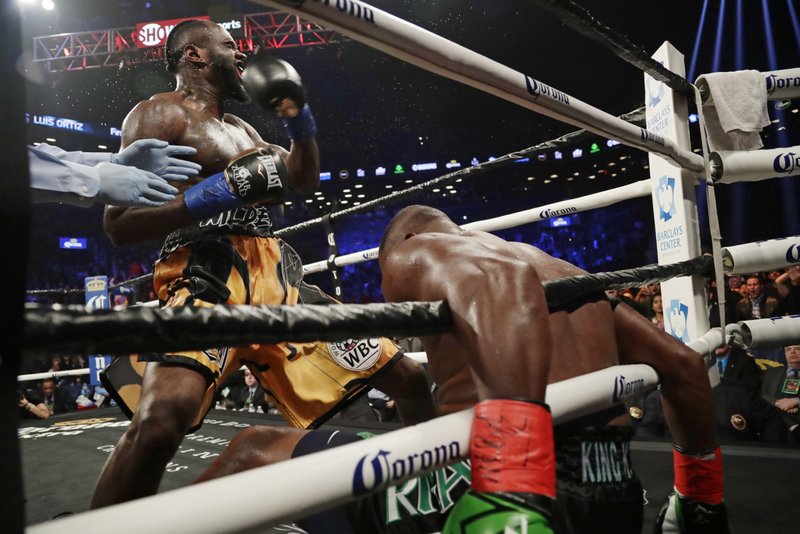 Deontay Wilder was out on his feet. Forget defending his WBC heavyweight title, Wilder was lucky to find his corner when the seventh round concluded.

About 10 minutes later, he was strutting around the Barclays Center ring, his belt secure, but his reputation as being untouchable severely tarnished.

Wilder survived a pummeling from Luis Ortiz, then knocked out the challenger in the 10th round Saturday night to retain his crown. Befitting the undefeated champion from Alabama, it was a wild affair for the final few rounds after a dull series of pawing and gesturing by Wilder gave Ortiz a solid lead.

“A true champion always finds a way to come back and that’s what I did tonight,” Wilder said. “Luis Ortiz is definitely a crafty guy. He put up a great fight. We knew we had to wear him down. I showed everyone I can take a punch.”

Well, yeah — Wilder certainly took his share of them.

Even after Wilder knocked down Ortiz in the fifth round, the bout remained in the Cuban’s favor.

Then, in the seventh, Wilder was dazed and confused by Ortiz’s assault. Though he never hit the canvas, he stumbled to his corner when that round ended. The end seemed near.

“I almost had him and I think I would’ve if there were a few more seconds in the round,” Ortiz said. “Wilder was definitely saved by the bell. I thought I had him out on his feet. But you have to give him credit, he weathered the storm.”

Instead of folding, Wilder closed the ninth with two hard rights, and then a series of vicious combinations in the 10th started Ortiz’s downfall.

It was over with 55 seconds to go in the 10th after Ortiz went down for the second time in the round from a right uppercut and referee David Fields stopped it.

“I just had to get my range back and my fundamentals back,” Wilder said. “And I was able to do that. I showed I was a true champion tonight.”

Wilder, 32, is 40-0 with 39 knockouts. This easily was his toughest bout. Somehow, he was ahead on all three judges’ scorecards.

The Associated Press had it 86-83 for Ortiz heading into the 10th.

Ortiz, 38, is 28-1. He couldn’t have come much closer to becoming the first Cuban heavyweight belt holder after finally getting his match with Wilder. Their initially scheduled bout was in November, but Ortiz twice tested positive for a banned substance, a diuretic.

He was ready Saturday, but not quite resourceful enough.

“In this sport, any punch can end a fight,” Ortiz said. “In the ring, anything can happen.”

Wilder basically threw away the early rounds with a lack of aggression and much clowning. The left-handed Ortiz was all business.

In the fifth, with boos raining down from the crowd of 14,069 at Barclays Center, Wilder finally landed a solid punch. That invigorated him and two rights to the chin sent down Ortiz.

Wilder couldn’t finish him, and was nearly finished himself two rounds later. Ortiz was so dominant in those three minutes that Wilder looked bewildered at his predicament.

The champ hung on in the eighth, then somehow found the fortitude and punching power to turn it around in the final two rounds.

“Luis Ortiz was one of those fighters that everyone ducked, even champions ducked him,” Wilder said. “I wondered why it took so long for him to get a title shot and now we know.”

What boxing doesn’t know is how this performance will affect the division. Wilder’s sights have been set on Anthony Joshua, who defends his WBA and IBF crowns at the end of the month against WBO champ Joseph Parker.

If nothing else, Wilder’s ring reputation took a hit, although his toughness and ability to take a punch can’t be questioned.

“I’m ready right now,” Wilder said. “I always said that I want to unify. I’m ready whenever those guys are. I am the baddest man on the planet and I proved that tonight. This solidified my position at the top of the food chain tonight.”