More than three decades ago, Dolester Miles and her sister were sewing curtains for a then-new white tablecloth restaurant in Birmingham, Highlands Bar & Grill. Miles’ job was to make salads and hors d’oeuvres, but early on she persuaded the chef, Frank Stitt, to let her make desserts.

Meanwhile, Stitt, who had the audacity and imagination to apply his French training to the Southern food he grew up eating in Cullman, began taking Highlands to places no Birmingham restaurant had gone. The national attention and acclaim included Gourmet magazine ranking Highlands a stunning No. 5 among the top U.S. restaurants in 2001, and Stitt that same year winning a prestigious James Beard Award for outstanding regional chef.

Monday night, Highlands and Miles claimed even larger prizes: The James Beard Foundation named Highlands the outstanding restaurant in America and Miles the outstanding pastry chef, ending years of “almost” for both. Highlands had been a finalist for the coveted outstanding restaurant award 10 years running, inspiring comparisons to soap opera actress Susan Lucci, who was nominated 18 years in a row for an Emmy before winning on her 19th try. Miles had been a semifinalist for outstanding pastry chef the past five years and made the final cut for the past three years.

“I can’t believe this, but I just want to thank everybody that voted for me in the James Beard Award,” a tearful Miles told the audience at Chicago’s Lyric Opera. “And thanks, Frank and Pardis (Stitt) for putting up with me all these years. And thanks to my pastry team back at home that’s doing all the work and I get to come here.”

Gulping for breath, Miles added, “My God. Thank you. That’s all I can say.”

“I think one of the reasons we’re all here is we’ve been caught up by the magic” of restaurants and “trying to create a little bit of beauty in one’s work and hopefully in our guests’ day,” Stitt said. “I want to thank my incredible team and the brightest star in my life, my wife, Pardis. And thank you all so much. And to the James Beard Foundation, it’s a great honor.”

‘Quality And Excellence In Food’ 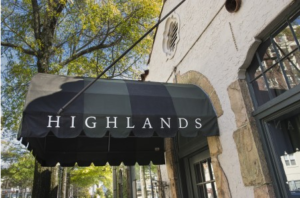 The Beard Foundation bestows the outstanding restaurant designation each year to “a restaurant in the United States that serves as a national standard bearer of consistent quality and excellence in food, atmosphere and service.”

During Highlands’ nine-year streak, it lost to restaurants in New York, San Francisco and Chicago. This year, Highlands bested Balthazar in New York, Canlis in Seattle, Frasca Food and Wine in Boulder, Colorado, and Quince in San Francisco.

“Dol is amazing,” said Lam, who has won four Beard journalism awards, including one writing for Birmingham-based Cooking Light magazine. “To vote for her, you have to have gone to the restaurant. Honestly, it is a little trickier for chefs who work in smaller towns than Chicago or New York.

“I think what a restaurant like this in a small city like Birmingham is doing winning this award is the fact you can pretty much trace the entire modern Southern chef cuisine moment to Highlands,” he said. “Frank was one of the first chefs of our era to have French training but say, ‘You know what, the food of the South that I grew up with is worthy of this treatment.’ He started serving grits soufflé 30 years ago, and fine dining Southern restaurants became possible.”

That Birmingham is now home to America’s most outstanding restaurant did not escape notice.

“A Restaurant in Birmingham, Alabama, Is Voted Best in America,” said the headline on Bloomberg’s story of the Beard Awards.

Birmingham has received plenty of attention in recent years for its thriving food scene, and many trace that to Stitt and the influence he has had on a generation of chefs and other culinary professionals.

Dubbed the ‘Godfather of Southern Cuisine,” Stitt can claim alumni from Highlands and his other restaurants, Chez Fonfon, Bottega and Bottega Café, who cook for, manage and/or own restaurants across Birmingham and beyond. In Birmingham, those include Chris Hastings of Hot and Hot Fish Club and OvenBird; Chris Dupont of Café Dupont; Geoff Lockert and Brian Somershield, who opened Trattoria Centrale, El Barrio and Paramount; Mauricio Papapietro of Brick & Tin; Chris Newsome of Ollie Irene; and Keith Richards, founder of Taziki’s.

Now the spotlight will shine even brighter on Birmingham as home to the nation’s outstanding restaurant and pastry chef. As the lead to Bloomberg’s story put it: “The country’s biggest food destination this year is Birmingham, Ala.”