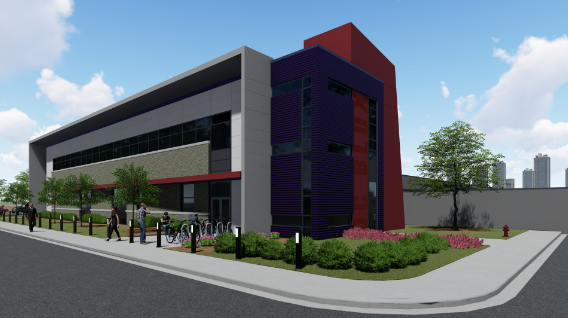 DC BLOX, an Atlanta-based provider of data center, network and cloud services announced Monday the development of a new data center facility at the former Trinity Steel site in Titusville, creating 20 jobs initially with the potential to grow up to $785 million in capital investment and add jobs over the next decade.

“We’re fortunate to have it happen here now,” he said. “We support it we’re looking forward to it helping our neighborhood development. We have a framework plan for redevelopment in this neighborhood, so a lot of good things are happening here.”

City officials say the new site will bring life back to the former Trinity Steel site property, which has long been vacant, as well as help revitalize the Titusville neighborhood.

“The city of Birmingham was proud to work with DC BLOX to bring this significant data center project to Birmingham,” said Mayor Randall Woodfin. “In addition to utilizing a long-vacant property in our city and transforming the surrounding neighborhood, this will serve as the company’s flagship data center and a tool to attract further business to the area.”

“It was a team effort, it wasn’t one person that did this, it took both the county and the city in order to move this project along with University of Alabama at Birmingham (UAB)  and so many others . . . once we get together, you’ll be amazed at what we actually can do,” said Birmingham City Councilwoman, Sheila Tyson, who represents the district.

Groundbreaking of the multi-tenant facility in Birmingham will begin August 2018.

“The significant investment being made by DC BLOX to open this data center in Birmingham will not only create high-paying jobs, but also bring an exciting new chapter to a neighborhood in the city with a long industrial history,” said Gov. Kay Ivey. “We’re committed to positioning Alabama for a technology-focused future and look forward to working with the company to accelerate that process.

The Birmingham data center will join DC BLOX’s Atlanta and Chattanooga sites and the current site in Huntsville that is under construction on the company’s high-speed, high-capacity private optical network. The facility will have 13,000 square feet of office space with conference rooms, staging areas and work stations.

“The Birmingham data center campus will unquestionably be our flagship property, capable of scaling to over 200,000 square feet of secure, government-grade data center space,” said DC BLOX CEO Jeff Uphues. “We believe this site will be a highly compelling alternative in the Southeast to Atlanta for enterprise, hyperscale cloud, software-as-a-service, government, network and content providers. It’s our focus to create a multi-purpose innovation campus with collaborative workspaces worthy of housing global technology companies and academia dedicated to research and collaboration.”

Estimated economic impact during the construction and operational phase is $94 million in the Birmingham metropolitan area, more than $80 million of which will be in Jefferson County, according to an analysis commissioned by the Birmingham Business Alliance (BBA). Economic impact on the state is estimated to be $99 million.

“DC BLOX will be a tremendous asset to the existing companies throughout Jefferson County and a tool to attract new companies here,” Carrington said. “This takes Birmingham’s thriving innovation ecosystem beyond its usual physical boundaries of the city center and extends it into an area that will only strengthen our core.”

Alabama Commerce Secretary Greg Canfield said, “Because data centers represent the backbone of the technology infrastructure, we see strategic benefits for Alabama to host state-of-the-art centers that keep the world connected. DC BLOX is joining an impressive roster of technology companies selecting Alabama for their data centers, and we want to see that list grow.”