Helen Shores Lee, the first African-American woman to serve as judge on the Jefferson County (Alabama) Circuit Court and daughter of prominent Civil Rights Attorney, Arthur Shores, has died. She was 77.

Lee was appointed a circuit judge for the 10th Judicial Circuit of Alabama in January 2003 by former Gov. Don Siegelman. She retired in 2017.

Lee was born on May 3, 1941 to the late Arthur Shores and Theodora Warren Shores. Lee grew up in the Smithfield neighborhood with her parents and younger sister, Barbara.

Being the daughter of a prominent Civil Rights Attorney, Lee’s safety was always in danger. Between 1947 and 1965, approximately 50 dynamite explosions targeted at African Americans were detonated in Birmingham, earning the city the nickname, “Bombingham.”

Lee’s neighborhood of Smithfield was targeted by the Ku Klux Klan so many times it was called “Dynamite Hill.” The Shores home was bombed twice within a two week period during the summer of 1963, injuring Lee’s mother and killing the family’s pet. There was also bullets shot at their home.

Lee once said, “As a child, I learned from my parents early the importance of giving back to the community. As an adult, I have found that giving of your time and service can be one of the most rewarding experiences in life. If I am to promote the welfare of my community and make my city a better place to live, then I must get involved and I must give of my time, my service and myself for the benefit of others. This is the model I follow in my professional career and personal life.”

After years of practicing as a clinical psychologist, Lee decided to follow in her father’s footsteps and earned her Juris Doctorate from Samford University, Cumberland School of Law in Birmingham in 1987. After receiving her law degree, she began practicing Law with her father.

In 2013, Lee was honored by the Young Women’s Christian Association (YWCA) of Central Alabama with the Jeana P. Hosch Woman of Valor for her decades of commitment to civil rights and community service. She was also named Samford University Alumnus of the year in 2014.

Lee committed her life to ensuring equal justice for all and community service. She served on boards such as Blue Cross Blue Shield of Alabama, Campfire Inc., Chair of the Advisory Council of the University of Alabama at Birmingham Minority Health and Research Center, trustee for Leadership Birmingham, the Civil Rights Institute, Young Women’s Christian Association (YWCA) and many more.

Lee and her sister are the authors of the book, “The Gentle Giant of Dynamite Hill: The Untold Story of Arthur Shores and His Family’s Fight for Civil Rights,” which highlights their experiences growing up in Birmingham during the racially charged 1960s.

Arthur Shores, who died in 1996 at the age of 92, filed various civil rights suits for African-Americans that involved issues such as registering to vote, zoning and equal pay. He argued successfully before the U.S. Supreme Court in a case that eventually allowed for Autherine Lucy to be in 1956 the first African-American admitted to the University of Alabama.

The funeral for Lee will be held Friday, July 6 at 11 a.m. at First Congregational Christian Church in Smithfield located at 1024 Center Street, Birmingham, AL 35204.

-This story will be updated. 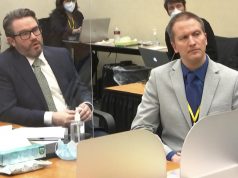 Derek Chauvin convicted of murder in death of George Floyd