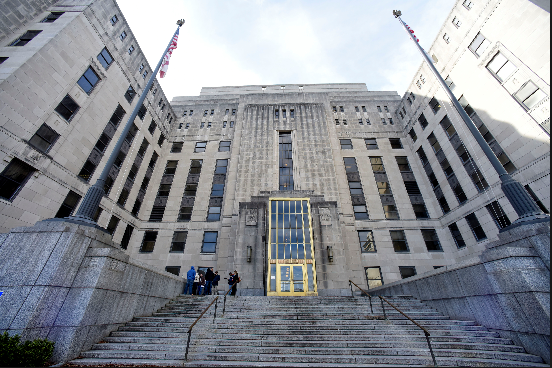 With less than a week before the July 17 Democratic runoff elections, Jefferson County Commission candidates in Districts 1 and 2 are doing all they can to make sure voters return to the polls.
Polls are open from 7 a.m. to 7 p.m.
Runoffs traditionally yield fewer voters than primary races, which could be pivotal in close races like the District 2 race where incumbent Sandra Little Brown edged out Birmingham City Councilwoman Sheila Tyson by about 60 votes in the June 5 primary elections.

Here are candidates for the County Commission races on Tuesday, July 17.

Birmingham City Councilwoman LaShunda Scales received 8,448 votes, or 42.30 percent, to incumbent George Bowman’s 4,969, or 24.88 percent in the primary elections. However, Bowman since has picked up two key endorsements from Midfield Mayor Gary Richardson and former state lawmaker Eric Major, who placed third and fourth in the Democratic primaries for Commission District 1. Bowman said he’s trying to build on the momentum he’s created as a county commissioner, particularly with bringing jobs to the county. He also said he should get credit for helping to bring the Amazon fulfillment center to Bessemer, a facility that will employ 1,500 people when it’s up and running. “We want to continue that upward swing of jobs – good-paying jobs for the future of Jefferson County,” he said. “When we talk to people about coming to Jefferson County, we’ve got to give them a reason to stay. And good decent-paying jobs is one of the best attractors for citizens. So from a commission standpoint, that’s our No. 1 priority.”

Another priority has been lowering sewer rates, he said. “I’ve been a proponent of lower sewer rates since the very beginning.” Although the sewer rate issue is in the hands of the court, he’s hoping some relief will come to county residents, particularly the elderly. “It’s a concern for older Americans who are on fixed income,” he said. “And any increase in sewer rates means a reduction of their family’s quality of life.”

Bowman, who has served on the commission for nine years, said he brings experience. He also touts his relationship with national boards and associations including his role as chairman of the National Association of Counties’ Veteran and Military Affairs committee, his membership in the National Organization of Black County Officials, and his role as past president of the Alabama Association of Black County Officials. He is also a U.S. Army veteran with more than 34 years of duty.

Scales said she’s looking for a repeat of the June 5 results. “We’re making sure our message is well communicated to the voters,” she said. “Most of all, we’re reminding people to get back out to the polls to vote in the runoff election.”

Scales, who has served eight years on the Birmingham City Council, said the primary needs of the commission district include sewer bill relief, jobs, public safety and road maintenance and improvements.

“One of the initiatives I would like to see funded is the Metro Area Crime Center Initiative,” Scales said. This initiative would ensure that communities underserved by police protection would receive the same amount of coverage as larger communities. “Where there is a shortage in coverage, this program can help by providing additional deputies in addition to local police officers,” she said. “Therefore, unincorporated portions of Jefferson County Commission District 1, would receive the same quality of police service for patrolling residential communities and protection of our schools and our businesses.”

Scales added that roads in “Birmingham, Midfield, Adamsville and Fairfield are in desperate need of county road repairs, and that will be accomplished through proper funding of the roads and transportation department within the county.”

Scales said she is running on her track record as a councilwoman, and if voters consider her accomplishments, they’ll see she’s the best candidate.  “We’ve brought more than $2 billion in economic development projects to our (council) district. We’ve brought over 2,000 jobs to the district. We’ve gotten over $2.6 million in street paving projects done in our district. We’ve gotten over $1.6 million for the police and fire departments and $485,000 in neighborhood projects,” she said. “We have a proven track record of getting things done,” she said.

Brown said the most important issues in her district are jobs and education funding. She also highlights her role in Amazon building its fulfillment center in Bessemer. “We set $10 million aside in economic development to lure those type businesses to Jefferson County,” she said. “Our economic development team goes out and finds companies like Amazon that can bring jobs to our community.”

Brown said she believes her ability to get along with the bi-partisan commission while championing diversity within county government makes her the best candidate to represent her district. She noted the appointment of the first black county attorney (Theo Lawson II) and the first black chief financial officer (John Henry) for the county as efforts to promote diversity and fulfill a 1982 federal consent decree that the county not discriminate against blacks and women in its hiring practices.  “It’s about collaborating and working with others and making sure you do what’s good for all the people of Jefferson County,” she said. “And that’s what we’re doing.”

Tyson has said her campaign platform is centered around service. “I have served this country in uniform, the City of Birmingham as a two term elected official and a worker in the community for several decades,” Tyson has said. “I need help to turn around poor decisions made for District Two.  If given the opportunity, I will make the right choice with you in mind and advocate for you,” she’s said to voters. “I would be honored if you cast your vote for me as your next Jefferson County Commissioner for District Two.  I am a community advocate and a hard worker. With the help of your vote, the story will continue.”

Ask why she was running to become the next Jefferson County Commissioner for District 2 she said on her Facebook page:

“I believe our children are truly our future. My decisions will be made with them in mind. Our local schools deserve more funding. I care for people. Our elderly community struggles under the weight of the high sewer bills. And I want everyone to be able to have access to healthcare.  I feel the decisions surrounding Cooper Green has systematically destroyed the clinic.”

Tyson said her promise is to work on redevelopment efforts for a clean, safe and prosperous district; fight to reduce out of control sewer bills; fight for more money for our local school systems; lead community efforts to keep Cooper Green and fight to give all Indigent Care Fund money to a Health Care Authority; fight to bring jobs and resources to District 2.