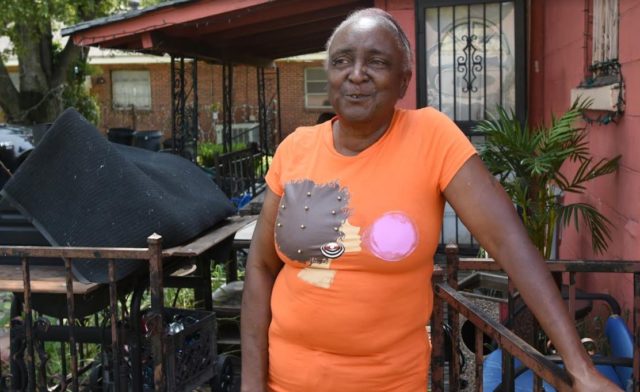 Elizabeth Rainge has lived in North Birmingham’s Harriman Park neighborhood for about 18 years. She was born in Collegeville and lived in the parsonage of the original Bethel Baptist Church—and that wasn’t a coincidence. Her cousin was the Rev. Fred L. Shuttlesworth, Birmingham’s drum major for Civil Rights and the man for whom her street is named.

In the late 20th century, Shuttlesworth fought against the perils of racial injustice.

“Y’all kind of famous, daddy,” she said to her father in her youth.

Today, North Birmingham residents deal with the perils of what some call environmental injustice—“low-income and racialized communities … subjected to a disproportionate amount of environmental vulnerabilities due to their residential location, such as low air quality and close proximity to pollutant emitting facilities,” according to a 2017 article in the journal Habitat International.

Throughout her years in North Birmingham, Rainge’s most visible neighbors have been the industrial plants, including Walter Coke Inc., and Drummond Co. Inc., which owns the nearby ABC Coke facility.

“Sometimes growing up, some of us kids would go outside to play

ball in this lady’s field right next to the house, but we didn’t play because we could smell something,” she recalled. “[We’d say], ‘That don’t smell right.’ We’d stay in the house.”

And it wasn’t just the smell.

“Momma would say, ‘Ohh, Lord, I can’t hang out clothes today. Something black’s blowing,’” said the 66-year-old Rainge. “Now there are a lot of people out here with different kinds of cancers. I’ve got Crohn’s disease; they say it’s [potentially] from the environment because we didn’t know any better.”

In 2013, the U.S. Environmental Protection Agency (EPA) identified five potentially responsible parties (PRPs) for the current pollution in the neighborhoods, which have been the site of heavy industry for more than 100 years.

The named parties are Drummond Co. Inc., which owns the nearby ABC Coke facility; Walter Coke Inc.; Alabama Gas Corp. (Alagasco); U.S. Pipe and Foundry Co.; and KMAC Services. Efforts by the Birmingham Times to reach those companies for comment were unsuccessful.

A BirminghamWatch.org analysis this month found that a vast majority of Jefferson County’s 31 major sources of pollution—those emitting enough pollution to require an Operating Permit under Title V of the EPA’s Clean Air Act—are located in low-income areas. The findings show that 71 percent of the major pollution sources are in areas with incomes below the median income for the county; only one primary source of pollution is in a neighborhood with a median household income greater than 110 percent of the county median.

Throughout North Birmingham’s neighborhoods, conversations with longtime residents echo that same response—no one realized the peril that existed in the place they called home.

“Any place that had red dirt, all of us kids would get it and suck on it, not knowing it was contaminated,” said Rainge. “A lot of us are sick now.

Rainge’s father battled Crohn’s disease and ultimately succumbed to cancer. Several of her childhood friends also had illnesses, including Crohn’s, and many children now in the area deal with breathing disorders, sometimes beginning at birth.

“They can hardly breathe [because] they’ve got asthma so bad from breathing this air,” Rainge said, noting the dirt mounds on the property formerly occupied by one of the plants.

She said a friend of hers shot video of “black stuff” being shot into the air late at night.

“That stuff comes out every night after 12 o’clock,” she said, adding that it has a noxious odor. “People have lost puppies, dogs, cats, because of all that contamination.”

‘Not the Right Colors’

EPA officials have canvassed the area, testing yards and removing contaminated soil. Rainge doesn’t understand how her yard was deemed to not be contaminated while others around hers were.

“Why would I have, instead of a green frog, a gray frog coming out of my yard? An ugly gray frog,” she said of a frog she caught one day. “Look at the frog. Look at the bugs. They’re not the right colors. How in the Sam Hill is everybody’s yard coming down this way contaminated, but this yard on the corner is not contaminated?”

The longtime resident said she changed out some soil at her house to plant a vegetable garden, but it had a very poor yield.

“The tomato was so small you couldn’t find it,” she said. “The plants ain’t doing nothing.”

cleanup of sites contaminated with hazardous substances and pollutants. Sewell encouraged people who have rejected soil testing to allow the EPA to check for contaminants.

EPA Region 4 Superfund Division Director Franklin Hill, who joined Sewell and several other elected officials on the tour, said more than 2,000 properties have been assessed in the community and contaminated soil has been removed from about 390.

Rainge said her outspoken nature about the environmental issues in her community is inherited from her cousin Shuttlesworth, who was a vocal proponent for Civil Rights. She noted that she was photographed with him in pictures published in Ebony and Jet magazines.

In addition to dealing with environmental hardship, Rainge has dealt with several other misfortunes, including the loss of her older brother and sister in a house fire when she lived in Collegeville; firefighters couldn’t reach the house because of the trains that blocked the road. Nonetheless, the tragedies and trials of living in the area are counterbalanced by memories of churning homemade ice cream on her mother’s Collegeville porch.

“We just got together like a family,” Rainge said.