If anyone is proof that residents can make a difference regardless of age or ability, Annie Avery is that person.

“It is a wonderful feeling,” Avery said about being crowned. “I’ve been in [events] before, but to be a part of this at 80 years old is wonderful. … I never thought I’d do something like this, but I’m happy to give back. … I want to do good in the community.”

Avery was the only African-American top-10 finalist in the competition, which had 61 contestants—but the crown is just one of several accomplishments for Avery.

She marched with Civil Rights icon the Rev. Dr. Martin Luther King Jr. in New Orleans, La. She visited President George W. Bush as an invited guest at the White House. She took a trip to former South African President Nelson Mandela’s jail cell on Robben Island. She was named Woman of the Year in New Orleans, where she lived before Hurricane Katrina.

Now, Avery wants to build on the work she began after making her mark at the East Glen Center for Nursing and Rehabilitation in Birmingham.

“I just want to make East Glen a better place to live for other people and myself,” she said. “I want to make sure they have what they need, [make sure] we have good service and good food. We just need tender love and care. If you keep waking up in the morning and going to bed at night, you will get where we are. I’ve lived a good life, and I want to make sure others and myself continue to do so.”

This March at East Glen, Avery started a program called Ladies in Red.

“I’m from New Orleans, where we had Ladies in Red, and we spotlighted jazz musicians and their houses. Here [in Birmingham], we spotlight the ladies. We do care packages and our [mottoes are] ‘Caring and Sharing’ and ‘Everybody Is Somebody at East Glen.’”

“I felt good, and I just knew I was in the right place at the right time,” she said. “Being Ms. East Glen, I knew I could bring some awareness.”

Avery, no stranger to being a leader, wants to use her new platform to be a voice for seniors.

“I can visit every nursing home and teach them what I’ve learned here,” she said. “[I can help people] uplift their spirits and let them know everybody is somebody and they are important.”

Born and raised in New Orleans, Avery participated in voting rights marches with King in her hometown and in New York City.

Though Avery is not a college graduate, she attended Tulane University, where she studied real estate for two years; she worked as a real estate agent for 48 years. She served as director of African-American historic preservation, which maintained the homes of jazz musicians in New Orleans. And, in 2002, she was named New Orleans Woman of the Year by City Business New Orleans.

Avery is also a world traveler, having visited South Africa twice and China once.

“I went to Africa the first time just to make a speech to open the eyes of young men and women. I said to them, ‘There’s a star.’ Then I had all the young men and women look up at the sky, and I said, ‘See how many stars are up there? There are just as many stars down here.’ It was just a wonderful time, and we got to communicate with each other. They sent for me to go back the second time, so I must have done good,” she said, noting that she visited Mandela’s jail cell during one of her treks to South Africa.

Avery has also been a guest at the White House. She was invited by President Bush to tour both the White House and the Federal Bureau of Investigation (FBI).

“I was putting on Ladies in Red in New Orleans at the time, and I sent [the president] an invitation,” she said. “He said he couldn’t come, but he sent two of his representatives … to the party. Then he invited me to come to Washington, D.C., and I got a private tour through the White House.”

In 2005, Hurricane Katrina wreaked havoc on New Orleans. Afterward, Avery moved to Denver, Colo., with one of her sons, before moving to Birmingham with her other son.

As a resident of the Magic City and East Glen, Avery can continue her life’s work of doing good for others.

“I’ve inherited so many more sisters and brothers in Christ, and no [one should] be lonely,” she said. “Just give a smile. That’s all you have to do sometimes: smile and just touch [someone’s] hand. That’s what it’s all about. 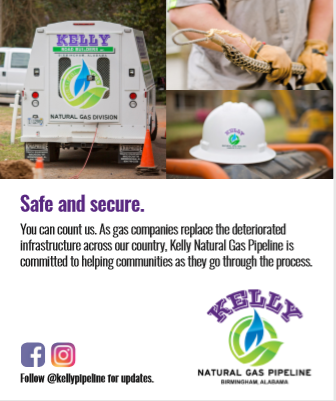