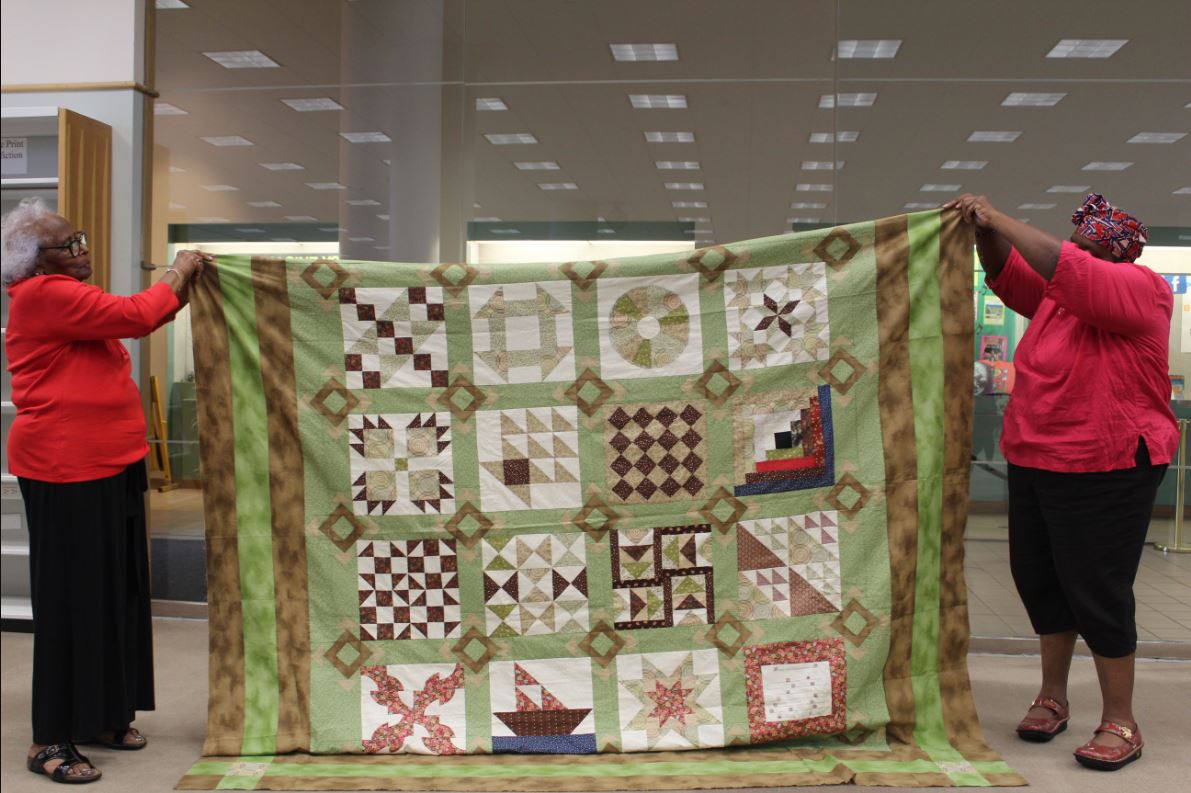 Each patch was embroidered with directions. Some to refill supplies, some to follow bear prints, some to take detours.

The Riley Center Quilters presented their Underground Quilts at the Birmingham Public Library Central Branch on Tuesday night. Some quilts were large, some small; some were completed, some not, but all offered directions on how to escape from slavery.

Quilts were used as codes because it was the only means of communication, said Daphne Simmons, a member of the Riley Center Quilters.

“Nobody was going get in front of a group of people and say, ‘okay tonight you’re going to travel from this state to this state by going north,” Simmons said. “There was a code, an unwritten code . . . passed down from person to person by word of mouth.”

Simmons explained what each patch meant on her quilt. The first patch or “block” was Jacob’s Ladder.

“This block has an alternating path of dark and light that shows direction” and that particular quilt showed slaves which direction they needed to move: north, south, east or west.

The second block was a monkey wrench, which meant that runaways had to collect materials needed for the journey. “Just like a real monkey wrench, it’s a tool,” Simmons said. “The monkey wrench is a metal tool used by a blacksmith. This patch symbolized the time to collect tools they would need on the journey north to freedom. They needed physical tools such as shelter, tools for defending themselves and tools for determining direction.”

They needed mental tools as well . . . “knowledge and ability for discerning the motives of strangers,” Simmons said.

She explained the block with the wagon wheel. “Wagons with hidden compartments were one of the primary means of transporting escaping runaways,” she said. “It was a message to pack provisions for their journey as if they were packing a wagon. Considering limited weight and space, they had to pack supplies essential for survival . . . you couldn’t take everything, but you had to take enough so that you can survive.

Simmons pointed out the spiritual “Swing Low, Sweet Chariot” referred to the wagon wheel. Spiritual instruction was the importance of the carpenter’s wheel, the next block, which gave direction “through Jesus,” she said.

“It’s a secondary code pattern,” she said. “Along with that block, the song was usually sung because plantation owners thought that slaves were singing about joining Jesus in Heaven. They were actually passing on a hidden message.”

They were to follow the carpenter’s wheel to the northwest, she said. Here are what some of the other patches meant:

Next was the bear’s paw which meant going through the woods. “You would follow the bears’ paws, their path . . . you’re also going to have to be careful and watch out for the bears.”

Animal footprints would indicate the best path through the mountains she said.

“Following those bear paws, they’re also going to be led to food and water,” she said. “Animals are going to show you the way.”

A basket meant the runaways would replenish their supplies at a safehouse.

Crossroads meant there was a city where they could find protection or refuge.

“The main crossroads was in Cleveland, Ohio,” Simmons said. “Four or five overland trails connected with Cleveland, and numerous water routes crossing Lake Erie into Canada and freedom. That’s awesome to me to know that these people did not have a map in their hands. I visit someone in another city and I depend on Google Maps. We’ve come a long way.”

A log cabin with a black block meant that was a safehouse where you could go for protection and shelter, she said.

A shoofly is where runaways could go for clothing.

“They would help you dress to blend in with clothes provided at the sign of the bowtie (the next patch),” Simmons said. “You couldn’t wear the same clothes you had on while running away. You had to dress up so you could blend in with the city folks.”

A sailboat was for “slaves who could walk through town undetected to ships waiting to take them across the great lakes to Canada and freedom,” she said. “There would be sailors there to help cross the river and enter Canada where the North Star (the next block) would shine with your freedom.”

Canada was the only place that offered “absolute freedom” for runaways, said Edna Turner, member and historical griot of Riley Community Quilters.

“There were some northern states who empathized with slaves, and who did not agree with it,” she said. “But the southern states had more land, they had more power, they had more voice in Congress. They had it written into law that anyone aiding runaway slaves could be fined and they were required to turn them back in.”

This session was a learning experience for many, including Miriam Omura, who was in attendance.

“I’m a weaver and textile artist, so I was more interested in learning more about the quilts and their project,” she said.

She learned more about how symbols were used for the Underground Railroad.

“I knew some of them, but I didn’t realize how many there were,” she said. “So, it was great to hear about more of the ones I didn’t know about.”

Judy Gross, a member of the Birmingham Quilt Guild, was in attendance and appreciated the history.

“It makes me want to make one,” Gross said. “I’m still new, I’ve only been quilting for about 9 months. I’ve only made one and working on my second one. I learned something I don’t think I would have otherwise ever had known,” Gross said.