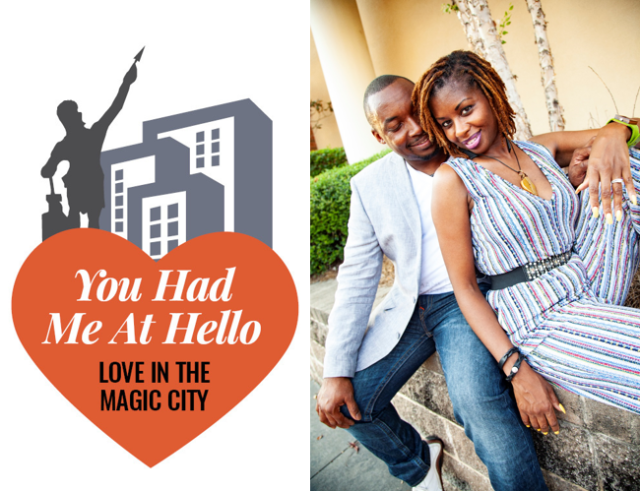 Met: Kenneth and Aisha first met at an AutoZone in 2003 and again in 2004 at O’Reilly Auto Parts when she came looking for a new tail light. Aisha remembered Kenneth from the first meeting and decided to make sure he was the one to help her.

She was attracted enough to him to finding excuses to visit the store. “I would go in and act like there was something wrong with my car. The other guys [employees] would be like, ‘ma’am can I help you?’ I’d say, no, I want that guy to help me.” After “five or six times” Kenneth finally caught on. “She was stalking me,” Kenneth said jokingly. “I knew she was interested in me, and she’s pretty easy on the eyes so I didn’t mind.”

First date: The first date was an impromptu “kick-it session,” the couple said. The two spent an entire day together, “chilling, watching T.V. and listening to music,” Kenneth said. Aisha didn’t want the day to end, and neither did he. “I actually had a prior engagement that evening that I didn’t want to go to anymore,” Aisha said, “so I left and came back.”

The Break: Aisha and Kenneth went their separate ways and she remarried but remained in love with Kenneth and her marriage suffered for many reasons, she said. She and her husband were separated for two years, and it [the divorce] was finalized at year three,” she said.

Kenneth found out Aisha had gotten married when he called several months later [2007] to see if they could work things out. “I was hurt,” he said, “I was in my feelings. [After finding out she was married] I went home and started playing Donny Hathaway’s ‘Giving Up.’ I felt like I had missed my window…I waited too late and now she had moved on,” he said.

Still, they reconnected in 2011. “About six months after my divorce was done, I called him to see if we could talk … it was an uphill battle from there,” Aisha said.

Kenneth waited for about a month before allowing her to come over for drinks and conversation. They agreed to give their love another try.

The proposal: A Las Vegas trip in April, 2013. “I set it up,” Kenneth said, “I told her that I wanted to take her to Vegas, and I made plans to propose to her there.”

Aisha was over expecting “the big question,” she said. “We had gone on so many trips since getting back together, and I kept getting my hopes up,” Aisha said.

“I proposed to her the day after we got there, when we woke up that morning,” he said. “We were sitting there talking, and I slid the ring out and asked her to marry me. It was at a time that she really wasn’t’ expecting it.”

“I was surprised, I didn’t expect it,” she said. “I was excited, I wanted to call everybody. I called my mom first, then I called his mom.”

The wedding: The Clubhouse on Highland Ave, Birmingham, AL The colors were burnt orange and purple. The most memorable part of their wedding, for Aisha, was “when the preacher said, I now pronounce you husband and wife, I snapped out of my daze,” she said.

Kenneth remembers, “We were drinking champagne, waiting to walk into our reception, and we were sitting across from each other just staring, and I was thinking, ‘this is my wife.”

Words of wisdom: It’s important to apologize, even at times that you think you are right, Aisha said. “Sometimes you may have to apologize to keep the peace. Choose your battles. Don’t make everything a war. Being honest and being able to talk to one another will get you through a lot.”

Kenneth said it’s a constant learning process. “No matter how much you think you love and know your soul mate, no matter how difficult it may get, stay the course,” he said.

Happily ever after: Aisha, 42 is a Woodlawn native, and graduated from The University of Alabama with a Bachelor’s Degree in Business. She is General Manager at a local La Quinta Inn & Suites. She founded a t-shirt line called ELEMENT AND VIBE. Kenneth, 44, is a Little Rock, Arkansas native and a graduate of Murray State University, with a Bachelor’s Degree in Business Administration. He is the general manager at a local Auto Parts store. The couple have two children, Joshua, 14, from her previous marriage, and Kai, 3.