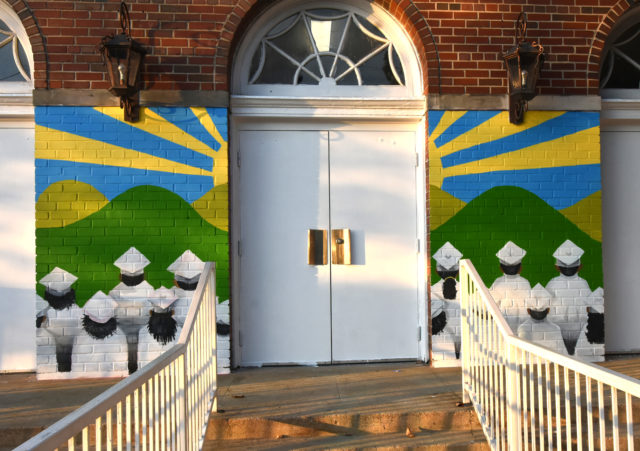 Pettway said the councilman received an email from Behr Paint asking for a project that could be done in Smithfield. Bethel House was the obvious choice, he said.

“It’s also very important because it sits on the main thoroughfare – Rev. Abraham Woods Jr. Boulevard.  We know a lot of traffic goes through here daily.”

Michael Lundy,  president and CEO of the Housing Authority Birmingham District (HABD), said Smithfield Court was built in 1935 and is the oldest public housing community in Alabama.

“This is our oldest property and has historical significance because this is the center of the community,” he said. “To do an updated mural for this building I think is really going to be appreciated.”

John Grant, executive director of Celebration Bowl with ESPN, said the project is a reflection of presenting art in community. “Art has transformative effects,” he said. “We unfortunately in our school system are working hard to take art out of community.

“But art is what preserves culture and it interprets culture,” Grant said. “This project, in this community – street-facing – is going to have a transformative impact on the kids . . . and the people in this community.

Members of Alpha Phi Alpha and Omega Psi Phi fraternities and Sigma Gamma Rho sorority applied the primer on the front of the building. Devonte Holt, an artist from the Ensley, Green Acres and Central Park areas, used their bricks and doors that they painted white to create a mural to replace one that had adorned the building for many years.

The new mural, which Holt completed around Magic City Classic weekend, expresses the same things as the last mural – community, education and arts.

“We’re just making this mural bigger and brighter, and basically making it bolder,” the artist said. “When people see it, they’re ecstatic about it. They’re happy to see it and they’re motivated by the colors and everything that’s in the mural.”

Christopher Brooks, Alabama state representative for Omega Psi Phi fraternity, said this is one of many projects black fraternities and sororities partner.

“Every community that we go in as an organization, we’re here to make it better,” he said. “We go into the communities and just do the work.”

“As a collaborative effort as black Greek letter organizations, we always believe in servicing our community,” she said. “We’re glad to have the opportunity to participate.”

Taj Warren, a senior at the University of Alabama at Birmingham and president of the schools’s Iota Nu chapter of Alpha Phi Alpha fraternity, said their efforts shed light on a positive side of Birmingham.

“This is all that we want to do,” he said. “Greek unity is the main goal for all black Greek organizations.”