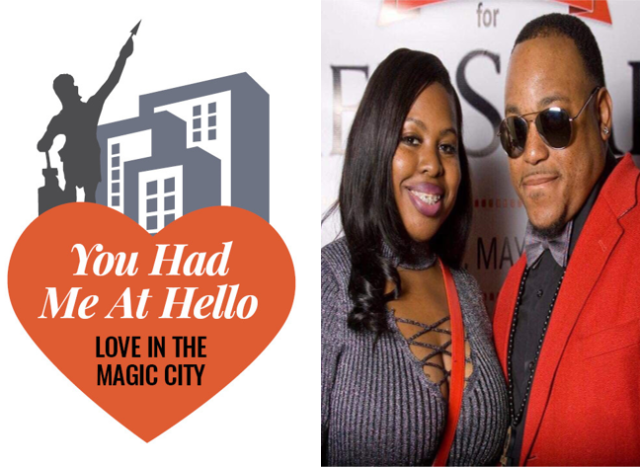 “You Had Me at Hello’’ highlights married couples and the love that binds them. If you would like to be considered for a future “Hello’’ column, or know someone, please send nominations to Erica Wright at ewright@birminghamtimes.com. Include the couple’s name, contact number(s) and what makes their love story unique.

Met: Toni and Tenesha met as teenagers in 1999. Toni, then 16, and a junior at A.H. Parker High School was looking for a singer to record the demos he created for the record label he was signed to. Tenesha, then 17, and a senior at Thompson High School in Alabaster was the person.

“My best friend Vic said he knew a girl out of Alabaster that could sing,” Toni remembered. So he called her “but that night she was off,” he said. “So that ended that [the audition] right there, but, I fell in love with her speaking voice, and we talked all night.” However, they would go months before connecting again. Tenesha said, “we were young . . .and we lost contact.”

First date: September 1999, at the Carmike Movie Theater on Lorna Road in Hoover. Tenesha describes the meeting as a blind date because “we had never met before,” she said. “We had a good night, we went out to eat after the movies . . . we bonded really well on our first date, but three weeks later he had to move to Atlanta for his music…we were real off and on,” Tenesha said.

Reconnecting: Toni finished high school in Atlanta and the two reunited for good a few years later when he called to invite her to the Nelly and Pastor Troy concert at The University of Alabama.

The proposal: Spring 2004, Toni proposed to Tenesha, one night after she got off work. He’d asked her to go to their favorite Mexican restaurant and popped the question before going inside.  “I didn’t do the traditional proposal,” Toni said.

“We were sitting in the car,” Tenesha recalled, and he said ‘you know I want to spend the rest of my life with you, right?,’ And I was like ‘yeah’ . . .and then he pulled out the ring and I was ecstatic,” she said. “We don’t have to go all out for everything we do, I think that’s why we’ve lasted so long. He did it when it was just us two sitting in the car, and we went right on in the Mexican restaurant and ate.”

The wedding: The couple was married at the Rolling Hills campground in Calera. Their wedding colors were “periwinkle blue and cream.” The couple had planned lakeside nuptials, but the forecast changed that.  “It rained,” Tenesha said, “so we had to move it inside to where the reception was going to be.”  The rain didn’t stop the show, “after we did the wedding and reception it was a big old party for the rest of the night. We had a good time,” she said.

Most special for Tenesha was how her family came together to give her away. The groom’s mom pitched in as well.

The best part of the night for Toni was seeing how their sides of the family enjoyed a party. ”Her family is the party poopers, my family is crunk,” he laughed.

Also, “my great-grandmother got to see me get married… I got a chance to spend that moment with a lot of my family,” Toni said.

“No, it’s not peachy all the time, no we don’t see eye-to-eye all the time…and we may not agree 65 percent of the time. But I tell you one thing, at the end of the day, we know how to come together and come to an understanding.”

“For me, commitment trumps feelings,” Tenesha said. “You can’t make reasonable decisions based on a temporary thing.

“When you’re in that heated argument…[don’t] say anything gut-wrenching to one another. After we finish our disagreements we both go think about it, and then we come back together. We don’t even have to apologize and make a big deal of it, we just come back together and do something we love to do together,” she said.

Happily ever after: The couple has a home in Helena and three teen daughters; Erin, 16, Layla, 14, and Taylor, 13. Tenesha, 37, is a telesales manager for a media/communications giant. Toni, 36, is the owner of a Birmingham based brand development and marketing firm, called Rising Icon Multimedia LLC.

Tenesha said Toni is “Mr. Mom, the kids love him. I work crazy hours, so he does way more than I do, he does it all, he cooks, picks them up from basketball games, takes them to show choir and band performances . . . he has the Father of the Year award.”