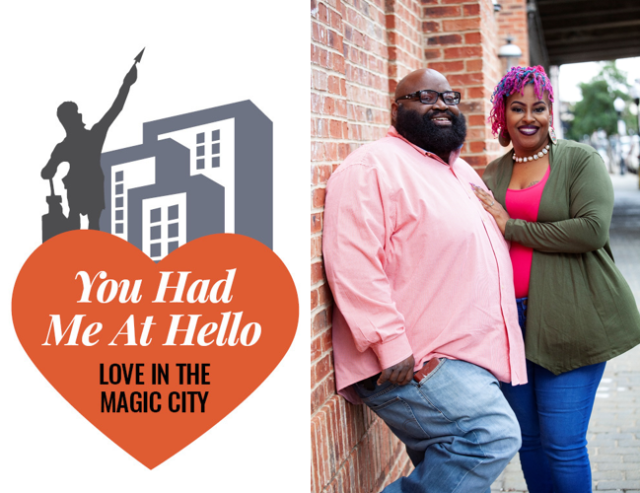 Met: Jameisha, a hairstylist, was working at a salon when she sent a Facebook friend request to Clarence.  Clarence was a friend of the owner of the salon where Jameisha worked. When Jameisha saw him on Facebook she knew he was her type. “I thought he was attractive, but I didn’t know him,” she said. Clarence, a barber, accepted her friend request, but he did not reach out to her for several months. “Typically, I would pounce and reach out to someone I liked,” Jameisha said. “But I did not do that with him. He would like some of my posts, but he did not really say anything to me.”  Clarence said he was going through a divorce at the time. One night in November of 2015, Jameisha said she was on the social media site and had posted “something about being single” and Clarence “liked” her post and reached out to her. They eventually spoke on the telephone later that night and into the next day. “We talked throughout the day,” Clarence said. 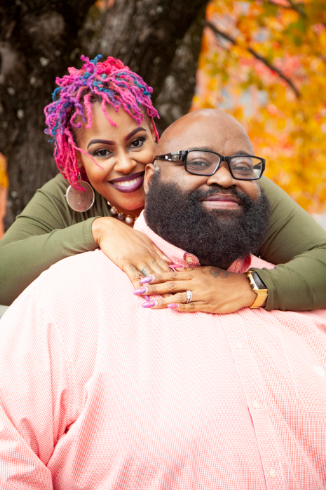 First date: The same day after they had talked throughout the night, Clarence and Jameisha agreed to meet. Clarence picked her up and they went to his apartment to watch television.  They also talked. “He asked me what happened with my last relationship,” she recalled. “And I just started crying and he grabbed my hand and told me it was alright.” After that date, they were inseparable, Clarence said.

Healing together: Clarence and Jameisha had both been in marriages that did not work.  They bonded over bad experiences from previous relationships. “I had been in these bad relationships and was hurt. I wasn’t sure I could take the risk of another relationship.” Clarence, who had also been in unhappy and unhealthy relationships, warned Jameisha “not to let her guard down” immediately, but he also reassured her that he wanted a future with her. “She was a genuine person. She was real and she didn’t mind letting you know what is on her mind,” he said.

The proposal: One night, Jameisha was invited to a “girls night out” at Applebee’s Restaurant.  But on that same day, a friend and her makeup artist came over to do her make up. “I kind of knew something was up,” she said. “I knew Clarence liked to surprise me.”  She and her friends went to the restaurant and after a while Clarence walked in and the song “Thinking Out Loud” by Ed Sheeran started playing.  Her friends immediately started taking pictures and Jameisha said she knew what was happening. “He asked me to marry him,” she said. “I had already gotten permission from her family,” he recalled.

The wedding: The couple applied for a marriage license soon after and moved forward with planning for the wedding. But then they decided to not have a large ceremony, deciding instead to purchase a home. They approached the pastor of their church, Hearing The Voice of God Ministries, about him marrying them.  He agreed to do it that same day following the church service. “We didn’t really know we were getting married that day,” Jameisha said.  The couple’s parents were not on hand, but their children were there. “Everybody just stood in a circle and we were married,” she said.

Words of Wisdom: The couple said they have learned valuable lessons from previous unsuccessful relationships and they bring that experience into this new union. Most importantly, they said, is to “work with your spouse and not against him or her.”  “We are a team,” Clarence said.

Communicating is important, the couple added.

“We never go to sleep without talking to one another,” Jameisha said. “I always share something interesting I have heard about or we talk about something with the kids. Or we talk about plans for the future.”

Clarence said they work hard to not hold grudges. “You have to be quick to forgive. We just go ahead and squash it when we have disagreements. We try not argue about everything.”

Clarence added that it is also important to “uplift” his wife. “I don’t believe men should tear down women. I try to be her hero.”

Happily ever after: Clarence and Jameisha said they know the importance of spending time together and the value of their 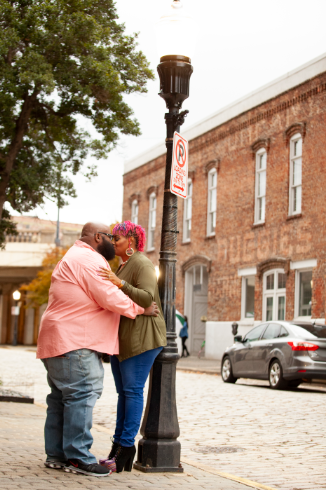 relationship. In November 2017, Clarence was shot while on the job as a barber inspector. “That was scary,” Jameisha said. “I got a call saying he had been shot and I didn’t know what to think.”  Clarence suffered non-life threatening injuries, but the ordeal forced him to step back from work. “I lived in fear,” he said. “Our life was on edge right after that.”  Clarence has since returned to work and both he and Jameisha, who now makes decorations for events and still serves as a hairstylist for some clients, said they are looking to expand their businesses. The blended family enjoys spending time together. The couple have two children— Prince, 1 and Conner, 4 months— and they share four others: Mariah, 20; Christian, 17; De’Angelo, 12; and Synthia, 8. They enjoy date nights and traveling. Clarence enjoys cooking. “My specialty is my potato salad,” he said. “I want to find a way to get that into stores.”