There remains a significant disparity in Jefferson County between blacks and whites when it comes to disability status, poverty, life expectancy, infant mortality and healthy food access, according to a study released Wednesday.

The Jefferson County Health Action Partnership (HAP) held its annual summit at Regions Field and released its 2018 Health Equity Report. Monica L. Baskin, PhD, professor and vice chair in the department of medicine at the University of Alabama at Birmingham (UAB), worked on the report and delivered Wednesday’s keynote address.

The report focuses on community characteristics such as education, poverty, neighborhood segregation, and healthy food access, which might impact health outcomes and life expectancy.

“One of the main things the report shows is that there still are some differences in race and gender by life expectancy, so whites, more so than blacks, live longer and then women live longer than men so that’s one of the issues,” said Baskin, who was also named HAP’s new chair. “We also see a concentration within the city of Birmingham of lots of poverty, less access to healthy affordable foods in terms of grocery stores, and higher concentration in some of the poorer health outcomes.”

Another major finding is “the disparity in infant mortality, where black women are more than twice as likely to have babies that die in the first year of life,” Baskin said.

The study found the most significant variation on community characteristics between census tracks in the “Over the Mountain” and Trussville areas than census tracts near the Interstate 20/59 corridor.

“Over the Mountain” and Trussville census tracts were found to have a higher percentage of white residents and fewer people living with disability, less poverty, longer life expectancy, lower infant mortality and greater healthy food access.

Drew Langloh, President and CEO of United Way of Central Alabama and outgoing chair for HAP, said the partnership is getting a lot of attention nationally. “United Way worldwide has sent groups here to study what we’re doing and is saying ‘how can we replicate this collaborative model around driving health equity across other communities’,” said Langloh.

As new chair, Baskin said she looks forward to work being done by the partnership.

“I’m really excited about taking us in a direction . . . where we can be much more actionable and really try to engage more of the community citizens,” Baskin said, “. . . hopefully people will give me lots of ideas and we’ll get more people engaged.”

For more information and to view the report, visit www.healthactionpartnership.org. 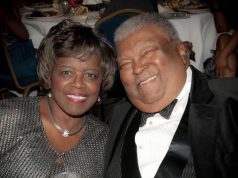