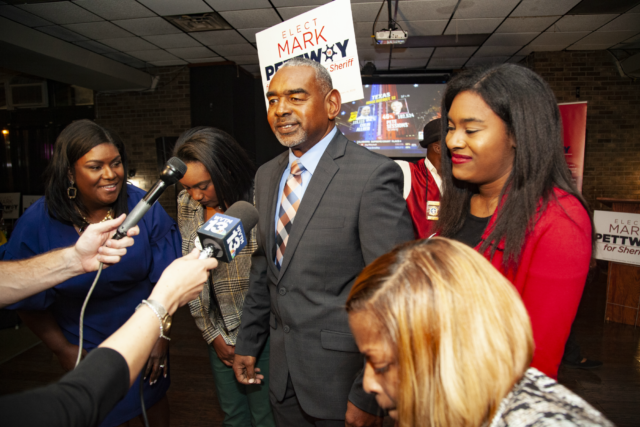 Mark Pettway never thought about making history. He wanted to make a difference. In 2018, the sheriff-elect was able to do both.

Last month, Pettway, 54, was elected the first black Jefferson County Sheriff—and no one is more aware of that history than Pettway.

“Jefferson County started as a county [200 years ago], in 1819, and the first sheriff’s name was Levi. My middle name is Levi, so [he and I] have something in common,” Pettway said. “After 200 years, that name comes back into the [Jefferson County Sheriff’s Office] as the first black sheriff. …  I thank my grandfather for having a good name—a good name is worth more than riches. He served the community and served the city as a leader, and now I’ll do the same.”

“[Voters] felt comfortable,” Pettway said. “They felt like I was competent, and they said, ‘Hey, I could really vote for this guy.’ They weren’t afraid of me. I was the type of person [who] could sit down and talk to them and have a good conversation. They liked my ideas and my platform, and they said it’s time for some reform. They wanted somebody who is going to be proactive, not reactive. … We’re going to change the game.”

Pettway, a sergeant in the Property Crimes Unit, had been in the Jefferson County Sheriff Office for 19 years. He never thought about becoming sheriff until after the protests in Ferguson, Mo., following the 2014 officer-involved killing of Mike Brown.

“I had a cousin who was out there as part of the protest group,” Pettway said. “I watched her on TV and said, ‘Wow, she’s out there really doing something and getting the community together.’ I thought, ‘If she can do that, then I can do something even greater than what I’m doing now.’ That kind of inspired me to step up into a higher role. [Also], there were things going on in the [Sheriff’s Office] that I wanted to see changed.”

One of Pettway’s concerns: the hiring process.

“I didn’t like the way we were hiring and promoting blacks. It was not fair,” he said. “I said, ‘I can either talk about it or do something about it, and if I get in the sheriff’s position, I can do something.’”

In 2017, U.S. District Court Judge Lynwood Smith released the Jefferson County Sheriff’s Office from the federal consent decree, which had been in place since 1982 as part of a lawsuit involving discrimination against hiring blacks and women.

When it comes to schools, in particular, he wants to find a way to give back.

“I try to live a life I think somebody else could pattern their life after, and I’m in a position … to speak and reach out to [people] and try to turn them around and point them in the right direction,” he said. “I think I’ve lived the type of life [that allows me to] share with others and say, ‘Hey, this is the way you need to live.’

“I tell the youth that we need to love one another. Love is the answer. We need to put down the guns, stop the violence, find ways to deal with conflict, set goals, and map out a plan for the future. Strive to be the best.”

Pettway plans to serve as a leader not just as sheriff in Alabama’s most populous county but in the community.

“First, I’m a leader at home,” he said. “Then, I’m a leader at my church, [Word of Faith Global Ministries], where I’m on the evangelistic team. I’m also part of the Peacemakers, [a movement that calls the faith community together to respond to violence]; we walk through the neighborhoods for peace. I also speak at elementary and high schools throughout the city and the county.”

Pettway was born in Germany but is a lifelong Jefferson County resident, who grew up in the College Hills area. He said he always liked helping people and knew law enforcement was for him. From 1991 to 1993, he served as corrections officer with the city of Birmingham. In 1993, he joined the Fairfield Police Department, where he worked until 1999, when he took a position at the Jefferson County Sheriff’s Office.

“I started out working as a deputy in the jail then I went to patrol. From patrol, I [served as] a detective with youth services. From there, I went to crimes against persons and then the IRS Task Force. Then I got promoted to sergeant and worked property crimes, where I [was] until the election,” he said.

Pettway is the son of the late Ed Pettway, retired U.S. Army sergeant first class officer, and the late Camilla Satisfield Pettway, a Jefferson County Schools teacher. He was educated in both the Birmingham City Schools and Jefferson County Schools systems, starting at Wilkerson Elementary School before moving to Brookside Elementary School. He graduated from Ensley High School and then attended Jefferson State Community College and the University of Alabama at Birmingham (UAB). In 1991, he graduated from Faulkner University and went on to work at AmSouth Bank and Blue Cross Blue Shield of Alabama.

“I left Blue Cross and moved to Montgomery, where I worked at Colonial Bank Group for a few months.”

While living in the state’s capital, Pettway had a decision to make: “I was coming [back to Birmingham] just about every weekend, and I said, ‘Hey, let me change this.’ [Eventually], … I got into law enforcement.”

The rest is history.