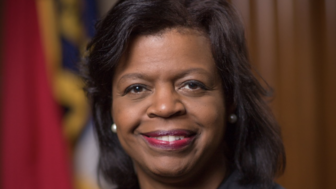 North Carolina Gov. Roy Cooper (D) on Tuesday appointed Cheri Beasley to be the chief justice of the state’s Supreme Court. Beasley will be the first black woman to hold the position.

“It is not at all lost on me, this historic factor, especially given that this is Black History Month,” Beasley said in a speech following the announcement, according to local ABC affiliate WTVD.

“I hope that in some way, my service inspires young people, especially, but really I hope it’s a show of symbolism for where we are in North Carolina,” she added. “This is certainly not the North Carolina of 200 years ago.”

She previously was an associate judge on the state’s Court of Appeals, and served as a district court judge before that.

Beasley, who is set to assume her new position in March, will replace Chief Justice Mark Martin. Martin announced his retirement earlier this year and plans to become the dean of the Regent University School of Law in Virginia, The News&Observer reported.

Beasley’s appointment will go through the end of 2020 and her seat will be up for election for a full eight-year term next year, according to The Associated Press. Beasley, who is a Democrat, and veteran Associate Justice Paul Newby, a Republican, reportedly are both planning to run at that time.

Cooper praised Beasley in a statement on Tuesday.

“Justice Beasley is a well-respected jurist, and I know her to be fair and deeply committed to viewing all North Carolinians equally through the eyes of the law,” he said. “I appreciate Justice Beasley’s willingness to serve the people of our state in this critical role.”