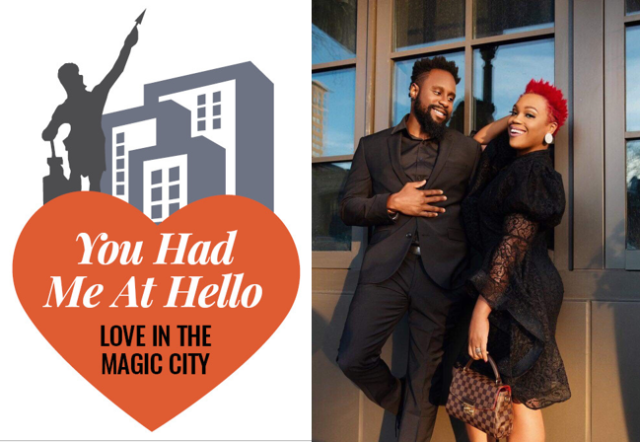 Met: Eric and Crystal met in July 2011 at the former Martini’s night club in Hoover. “We ran in the same circles, we just had never been introduced,” they said. Crystal said she was always hearing about “this Eric Dejuan” guy who was this photographer around town. I was always seeing his logo floating around social media, but never his face. I was just trying to put a face with the name,” she said.

“She [Crystal] saw me at [Martini’s] and contacted a mutual friend to inquire about who I was.” Eric and Crystal exchanged numbers and “she called me about three times before I could even get home,” Eric joked. Crystal and Eric never met up that night but would see each other a couple weeks later.

First date: Eric invited Crystal to the Stix Japanese restaurant, in Hoover, because she had never been. “I ordered the chicken and shrimp and two watermelon Martinis,” she said. “I ordered the drinks on purpose just to see if he was going to pay for them, they were $18 dollars a piece, and he did,” she laughed.

Eric recalled not feeling the connection between them. “I didn’t think that she really liked me, I just thought she was there just because it was something to do,” he said.

The turn: January 2012 would mark their first out of town adventure. They traveled to Atlanta for the Battle of the Bands and then to Gatlinburg, TN. From there they traveled everywhere together. They got even closer after “we literally both lost our jobs about 30 days behind each other,” Crystal said, “we took what we had both learned in business and put it together and started building our brands as a couple.”

They worked on their respective companies. “I was promoting his photography business, I was one of his faces, he was helping me with ‘Revamp’ [her fitness company] and designing my website, at this point we had no choice,” Crystal said. “It was either: A, we’re going to go look for other 9-5’s, or B, we’re going to work together as a unit and build two brands from the ground up.”

The proposal:  The idea to get married came about in casual conversation.

“We were sitting [at home] on the couch in the den, and it just came up,” Eric said. “It was kind of like ‘would you marry me?’, and she was like “I’ll marry you”, and then we said maybe we should get married,” Eric laughed.

The wedding: The Boutwell Auditorium, inside the upstairs event venue. “We had over 300 guests,” Crystal said. The colors were: antiqued gold, cream, champagne.

Most memorable was the “paparazzi photo and video shoot”.

“My favorite part was making the video in the elevator,” Crystal said, “we kept having to reshoot the paparazzi elevator scene over and over.”

“We went in and out the elevator about six times to get the shot right. We had a guard on the elevator with us like he was our security and we were big time folks,” Eric said. “We had seven photographers, a videographer, we had to stage a bunch of shots, it was like a big production, we had fun.”

Words of wisdom: “You have to grow into the perfect person with your spouse,” Eric said. “You have to adapt to all of their flaws and all the stuff that annoys you about them because no one is perfect. A lot of people are still single because they’re looking for someone to check off 10 out of 10 boxes on the checklist and that’s unrealistic,” he said. “You have to grow with your spouse and you have to make them the perfect person for you. And when I say that, I mean, adapting to them to you and you adapting to them.”

Building a successful marriage means you may lose some friends in the process,  Crystal said. “Social media can be damaging for relationships sometimes. But I feel like if you can connect with your spouse, deep down, despite what you do or see on social media you’ll be fine,” she said. “But everybody is going to have their perception and they’ll see stuff on social media and they’ll say #Goals or #MarriageGoals, but in actuality, everybody’s goal should be different and based on who you’re with. I think it’s a matter of creating your own reality with your spouse and not someone else’s reality,” Crystal said.

Happily ever after: The Evans have clientele in Birmingham and Atlanta and homes in Midfield and Atlanta and share two children from previous relationships. Crystal, 36, is from Mobile, Ala. and owner of the lifestyle-based Fitness company ‘Revamp’, that has recently branched out into a franchise company. Crystal is also mom to 10-year-old daughter, Alexia Colvin.

Crystal said every day in the Evans household is different. “We randomly chose when and where to travel. He’s a creative, so that pours over into our personal lives, I wake up to something different every day and we just go with the flow [of life] which makes it cool.”