Mayor Randall Woodfin on Thursday said bluntly that “gun violence in the City of Birmingham is a public health crisis.”

Woodfin made his statement as he unveiled the City of Birmingham’s PEACE Campaign to counteract violent crime.

The campaign is a coordinated effort between city, community and law enforcement to achieve change on multiple fronts.  It includes an #IncreasePeace public service announcement campaign that features 30-second videos of mothers of gun violence victims telling their stories.

Surrounding the mayor were families who lost loved ones to violence, many of them wearing t-shirts with the phrase “Increase Peace”, including Woodfin’s mother, Cynthia Woodfin-Kellum.

“When facing a health crisis, we must keep three things in the front of our minds,” the mayor said, “we need respect and sympathy for those at risk, we need coordinated efforts with trusted institutions who can help us develop solutions; and we need dedicated trusted media outlets to keep residents informed of the work being done to safeguard them and empowered with important information to make the city safer.”

The mayor said everyone has a role to play and in a health crisis “we turn to our health professionals because they have the training and expertise to help us find solutions.”

statistics. Ninety percent of the homicides involved guns, 86 percent of the victims were black, and the vast majority were men. Homicide is the number one cause of death nationwide for black males between the age of 15 and 35, he said.

“In our public health work we try to prioritize those things that affect the health and well-being of the entire population,” he said. “We also seek to promote health equity, we see something that’s adversely affecting one group of people more than others such that it creates a health disparity and if that’s something that is preventable, we should make a special effort to address it.”

Wilson said, “violence is an extremely complex problem with deep roots, there are no simple solutions . . . [it] will require multipronged, multidisciplinary, multi-stakeholder approach. The field of public health emphasizes getting input from diverse sectors of the population…we need collective action…none of us can do this alone.”

He said there is a four-step approach to public health: define the problem; identify risk and protective factors; develop a strategy or multiple strategies and evaluate them as well as test them; and if something works try to adopt it.

“What really needs to drive us here and what does drive me, and the people in our health department, and the people you see up here, is the people. This is about people,” said Wilson. “If any of you think this is somebody else’s problem and not your problem, you’re wrong…it is a true fact that if we have one part of our community that’s suffering…it’s affecting all of us.”

Wilson also pointed out that the statistics are “just the tip of the iceberg.” There’s a much larger culture of violence that’s having an adverse effect and traumatizing people in the community “often starting at a very early age,” he said.

Woodfin said he doesn’t want people to become desensitized to the murders.

The mayor, surrounded by grieving families, pointed out that he is also among the families who lost a loved one to violence. He lost an older brother to a shooting death in 2012.

From January 1 to January 31 of this year there were eight murders in the city, 18 felony assaults, over 800 gun-related calls, and police removed 145 guns from the streets, Woodfin said.

Among the families present was Carolyn Johnson, mother of 20-year-old Rodreckus Johnson who was shot to death in his car on Nov. 22, 2003.

“Being a mother who has lost a child to gun violence in this city is devastating, and you see us standing here today, it’s not easy for us, it’s not easy to get up and stand up and talk about the loss of your child,” she said.

She added that she was determined to get out the message “to let everyone know that, yes, it was my house then . . . but it could be your house next.”

Woodfin also announced Stop the Bleed, which trains residents how to stop severe bleeding from a gunshot, knife wound or other major injury. Training will be facilitated by the University of Birmingham at Alabama. Classes begin at Birmingham recreation centers next month; visit birminghamal.gov/peace to sign up.

In the law-enforcement arena, Woodfin announced that Birmingham police will soon be assisted by Predictive Policing technology. “Pred Pol” will improve patrolling by using years of date to indentify times and locations where specific crimes are more likely to occur. Also, a “Real Time Crime Center” will be established within the next year to help police monitor active crime scenes.

Visit birminghamal.gov/peace or text PEACE to 888-777 for more information. 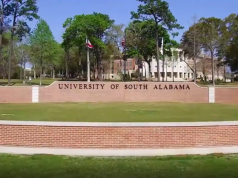