Becoming a realtor wasn’t a surprise for Madelaine Bowie. She always had an entrepreneurial mindset, she liked working with people, and she didn’t like giving others her money for rent. In fact, she bought her first house while working at a bar and grill in a downtown Birmingham hotel.

“I just had a vision at the end of the day: I knew I didn’t want to pay rent to anyone anymore,” she said. “I wanted to own my own house, and I knew … I wanted to expand to” owning more than just one.

Bowie, 33, wasn’t sure where her vision would lead, but she wanted to give it a try.

“I have an entrepreneurial spirit, and I love to go to work,” she said. “I really like to work with people, and I like to have purpose . . .like I’m making a difference.”

Bowie followed her dream and is now president and CEO of D&A Housing LLC and a licensed and insured realtor with a solid background in real estate investment.

Bowie’s focus is mainly the Ensley community because that’s where her family is from. Her grandmother, who lived in Ensley before she passed away, had 15 children. Some of them branched off to places like Ohio and California, but a majority still live in the Birmingham area.

“I feel bound to Ensley, and I feel like I can make a difference,” she said. “I know there’s a need for safe housing.”

Bowie rents mainly to low-income single parents, mostly mothers, because she remembers when she didn’t have a place to stay.

“I was living couch-to-couch, and I was pregnant at the time. Really, that’s no way for anyone to live,” she said. “I just feel like if I can provide safe housing and not only that … but build a property value, it’s a win-win.”

Bowie does more than just sell property: “When I go through a house, I go entirely through it”—she will redo the roof, the plumbing and electrical work, and make other repairs to “make sure people get an opportunity to live somewhere respectable,” she said.

Each project can take anywhere from two to three months, and Bowie buys a house every two years because she pays for the repairs.

“I’ve never gone through alternative financing through banks or anything,” she said. “Whenever I was able to save up enough money, if the plumbing was $4,000, that was my goal, … so I wouldn’t have to use outside sources to run my projects.”

Bowie rents her houses because of the residual income, and she doesn’t purchase houses that cost more than $17,000.

Bowie, who was also a licensed realtor for RealtySouth, was born in Bridgeport Conn., and raised in Decatur, Ga. She came to Birmingham in 2006 to study at Miles College with the financial help of her father. During this time, she had her 1-year-old daughter with her.

“I loved Miles,” Bowie said. “It was one of the best decisions I made in my life. … When I came down here it changed my mindset. I really like it. I like the homey feel Birmingham has. It’s very community oriented.”

While at Miles, Bowie studied biology with a minor in chemistry because she loves science and considers herself “a factual type person.”

“I like to know why things are the way they are, and I prefer definitive answers…,” she said. “When you have facts, nobody can really deviate from that, regardless of their opinion.”

Bowie got her first taste of real estate growing up in the Atlanta area. Her mom was a housekeeper for a mortgage broker, and she would take Bowie to work with her. When her mom’s boss would look at houses, he’d take his child with him, and Bowie would tag along.

“He was living in this huge … mansion, and I was like, ‘Oh my God, I want to be like this,’ she said. “That’s really what initially sparked my interest in real estate.”

Bowie’s love for the profession grew when she stayed on campus at Miles and a friend convinced her to get an apartment on the Southside.

“I was working, going to school, [taking care of my child], … doing what I had to do. I was just like, ‘I’m tired of paying rent.’ So, a great opportunity came my way when the market crashed [in 2007]. I bought my first house …  and started investing in that first property,” she said, adding that she rented out her extra room to her friend.

“That’s basically how I got into it: I saw an opportunity, and I just jumped on it.”

Bowie started D&A Housing—named after her two daughters: Deja, now 14, and Amelia, 8—while she was still a student at Miles, which she attended from 2006 to 2011. Bowie graduated with a degree in biology and a minor in chemistry; she tried to switch her major to business and accounting, but it didn’t work out.

For Bowie, another way she makes a difference is by mentoring two girls who are interested in real estate shadow her: “I just try to open their eyes. … There’s no age limit.”

“I don’t think there’s a limit on learning,” Bowie said. “If you want to know something and somebody has the answers, why not?”

Her goal is to help as many people as she can.

“I like to be honest and open about all facets of owning your own business, and I don’t mind sharing information—the good, the bad, the ugly—with anyone,” Bowie said. “Like I said, I’m a factual person. … I’m service oriented. I feel like it’s a lot more rewarding when you can help someone achieve their goal because on the path of helping them you help yourself. … If you put good energy out, good energy will come back.”

Bowie devotes time to several civic activities: she has been member of the YMCA junior board for three years; she’s in her first year on the United Negro College Fund (UNCF) board; she serves as chair of the Community Affairs Committee (CAC) junior board; and she is chair of the Steel City Connection, a networking group she started to introduce millennials to business owners around the city.

Working in a male-dominated field has been a challenge because some have tried to take advantage of her because of her age.

“People try to take advantage of you because they feel like you’re incompetent or a pushover,” said Bowie, adding that she’s learned from her mistakes.

“It’s [about] learning your craft, being efficient, networking, keeping good people around you that have your back, and just staying diligent,” she said. “Don’t let people discourage you.

“I’m proud to be a black business owner, a woman, in the Birmingham community. I love Birmingham, and I’m excited to see how the real estate takes off in the next few years with all the growth [in] Birmingham.”

One of the benefits of Bowie’s work is that she’s helping to revitalize a community: “Ensley has so much potential,” she said.

“I effectively invest my money back into the community because I want it to grow. … So many houses need to be revitalized, … [and] knowing that I can work one house at a time, … [in 10 years] at the pace I’m going, [Ensley] could be one of the premier spots to live.”

Click here to read how the city of Birmingham is celebrating Women’s History Month with the #StrongHER Campaign.

Click here to read about Deirdre Gaddis: Bald, beautiful and best of Birmingham.

Updated at 4:28 p.m. on 3/14/19 to correct the name of the committee where Gaddis serves as chair of the junior board. 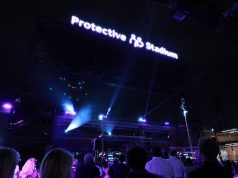