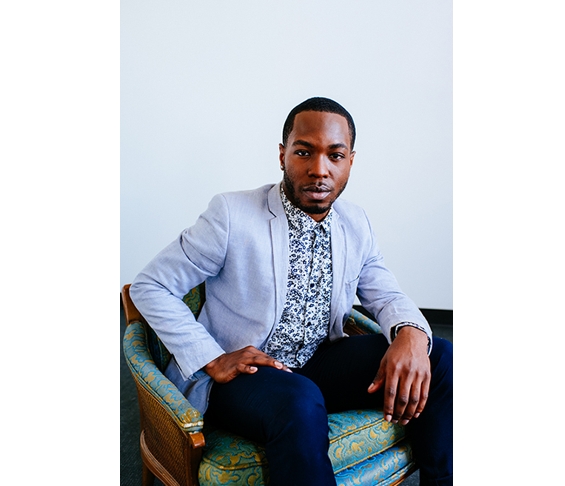 Royzell D. Walker has an important story to tell before he graduates from the University of Alabama at Birmingham this spring. 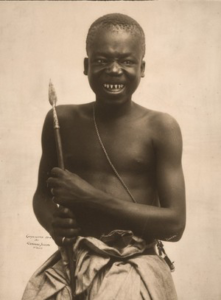 Walker is originating the role of Ota Benga in Theatre UAB’s new work, “Savage,” which will have its world premiere April 10. He is set to graduate just two weeks later with a Bachelor of Fine Arts degree in musical theater. Theatre UAB is the performance company of the College of Arts and Sciences’ Department of Theatre.

Playing Benga is a heavy responsibility. “Savage,” conceived and developed by UAB Professor of Theatre Karla Koskinen, is based on the true tale of Benga, a Mbuti man taken in the early 1900s from Africa by missionary and anthropologist Samuel Verner for exhibition at the St. Louis World’s Fair and, later, The Bronx Zoo. Benga traveled back to Africa, but for unknown reasons came to the United States a second time, and died there.

Walker, from Cincinnati, Ohio, starred as Seaweed in Theatre UAB’s 2018 smash production of “Hairspray,” for which he was also assistant choreographer. He has performed in “Spring Awakening,” “Working,” “The 25th Annual Putnam County Spelling Bee” and “A Little Night Music.” Walker has also performed with Cincinnati Black Theatre Company and Red Mountain Theatre Company. Trained in Estill Voice methods, voice and movement, and the Alexander and Stanislavski methods, as well as ballet, jazz and tap dance, Walker also counts improvisation, bag pipe and piano performance, rapping, beatboxing, and stage combat as special skills.

After graduation, Walker hopes to be on contract with a company, and plans to move to New York so he can audition as much as possible. He would also like to earn his Master of Fine Arts degree in interdisciplinary arts with a concentration in performance creation after a year or two of performing.

How did you feel upon reading the play, then winning the role of Ota Benga?

Upon reading the play, I was heartbroken. The script has come a long way since the first time I read it, and the team here at Theatre UAB is handling the subject matter beautifully. If I am being honest, there were thoughts that went through my mind about not doing the musical simply because of the subject matter and realizing how big this story was. Honestly, I am still a little intimidated. This is such sensitive subject matter, and it has to be authentic and honest. Since getting the role, it has been an absolute joy to explore Ota Benga and his truth. I have enjoyed the experience of originating a role as this is my first original musical of my career.

Tell us about your craft. How have you prepared for this role, and how are you taking care of yourself through rehearsals?

Playing Ota Benga is very vocally challenging, so I make sure that I am on vocal rest as much as possible, staying hydrated, going to yoga, going to the gym, eating healthier and also exercising a good mental state. After rehearsals, I go home and review my lines, and try my best to go to bed at a decent time.

Preparing for this role for me was simple: doing the research and learning as much as I can. This is a true story, and I was not as familiar with the story as I am now upon digging into the history behind it. I wanted to make sure that everything was authentic, and that I was able to gather as much information as I could that would help inform me about who Ota was as a human, instead of what others thought he was.

Becoming Ota Benga is all about being connected with the Earth. Since accepting the role, I have started taking yoga classes so that I can connect more to the Earth, connect more with myself and others around me, including my fellow artists in the cast, because becoming Ota Benga is becoming one with everything. One with the Earth, one with community and also one with the body. Practicing chakra work with (director) Karla Koskinen has helped me open up my heart chakra. Ota Benga has such a beautiful heart and soul, I didn’t want Royzell’s heart to block what that was, but to participate in what is needed in becoming Ota.

Do you think telling Benga’s story is important? Have you had any moments where you wish you could tell him or ask him something?

I definitely think that telling the story of Ota Benga is very important, because what they did to this man was covered up and sugarcoated as if it did not happen. But it did, and that’s the problem. History cannot be erased or transformed into something that it is not, because it will always come back and haunt every last one of us. There are days when I wish I could simply ask Ota Benga, why did you choose to come back? I believe I know the answer to that question deep within; but if he had not come back, I like to think that things would maybe have been different.

How do you feel about how his story is being told in this production?

To begin with, there isn’t much information out there on who Ota was as a person. So, we have to gather information from many different sources to try to piece together what makes sense about him, and what influences his choices. Whereas with a musical like “Hairspray,” which we did last spring, it has been done numerous times all over the world, with characters that have already been developed and depicted. I am originating the role, so I have to make these choices, which is a lot of pressure because I want to remain authentic and do him justice.

This story is a lot bigger than me, bigger than this cast. I am not only speaking for Ota Benga, but I am speaking for other African-Americans around the world because we have to deal with these things every day of our lives. So, that in itself is very challenging for me. I would also say that one of the biggest challenges for me is not going into the story angry because I know the end result of the story.

“Savage” is a very disturbing story, yet it has a sense of beauty to it. But it happened, and it is a part of our history that cannot be erased. You think you could imagine how he felt in these horrible situations, but you can’t. You simply can’t. No one could imagine the pain he must have felt. Every rehearsal, I have to become Ota Benga so I get a glimpse of that, and emotionally it’s very challenging. I couldn’t begin to tell you the days that I have gone home and cried. He goes on such an emotionally draining journey that most days I am just exhausted mentally. Might I also mention that this is a newly developing musical, so things are constantly changing? As far as intention, lines or music that may influence the character choices that I make for Ota, I have never worked on a new musical before, so this experience is very challenging, yet liberating because we get to take ourselves out of the picture and respect the story. It is very collaborative, which is what I love about it. We’re keeping everything as honest as we can, so that we can give Ota Benga the justice he deserves.

If you could tell me one thing you have learned from this process, what would it be?

Throughout this process, I have learned that the world needs more love. The more I begin to open up my heart personally, I begin to see that the decisions we make, the actions we take and the way we treat each other all begins with our hearts. We protect our hearts so much that we cannot let the truth in. Opening up your heart is like opening up the doors for change. It is needed. I hope the audiences that come to see this production can realize that.

Do you think this production will educate people? If so, what do you hope the audience takes away?

I want them to really examine themselves and the world we live in. I hope they begin to realize that history cannot be erased, and that it cannot pity you. That the parallels between what happened to him in 1904-1916, are still happening now in 2019, but it is appropriated. Now is the time to face the truth that we haven’t yet faced. We often hear that Americans know and care little about history. Hopefully this will help audiences realize the importance of history and how it impacts us. Ota Benga wanted to be free. Free from bondage, pain, death, America. He wanted to return home so that his soul could become one again with his tribe.

I hope audiences will realize that we will never be free until those who are in bondage have their same rights. Slavery is real, and still exists today. I want them to answer the question: What do we do today to move toward true freedom? There are people who are wanting to create a better future; but in order to create a better future, you have to recognize the past and move from there. We are not makers of history; we are made by it.

The great questions of this play cannot be settled by speeches and songs, but it has to continue afterward through action. As my favorite person in the world, Michelle Obama, said, “You may not always have a comfortable life, and you will not always be able to solve all of the world’s problems at once; but don’t ever underestimate the importance you can have because history has shown us that courage can be contagious and hope can take on a life of its own.” Ota Benga was very much rooted into the forests, the Earth and his community. What got him through these horrific things was the amount of courage he had in his heart. I want this story to give people the courage to change their ways, and open their eyes to this sensitive, unapologetic world we live in. He understood how being rooted in everything you do affects the world we live in. If we don’t have the knowledge of our past history and origin and culture, it is basically like a tree without its roots.