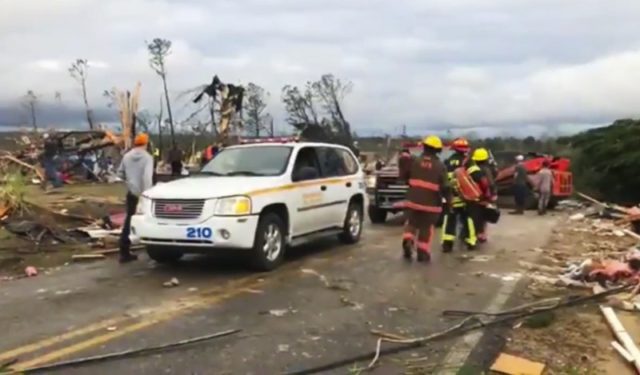 BEAUREGARD, Ala. (AP) — A tornado roared into southeast Alabama and killed at least 23 people and injured several others Sunday, part of a severe storm system that caused catastrophic damage and unleashed other tornadoes around the Southeast.

“Unfortunately our toll, as far as fatalities, does stand at 23 at the current time,” Lee County Sheriff Jay Jones told WRBL-TV of the death toll. He added that two people were in intensive care.

United Way of Central Alabama (UWCA) in partnership with United Way of Lee County, has launched a secure and trusted donation site that will serve victims of Sunday’s F3 tornados. Dozens are seeking medical treatment amid the widespread catastrophic damage. “This is the first disaster of this kind and magnitude we’ve experienced,” said Rebecca Benton, Executive Director, United Way of Lee County.

“While the Lee County leadership is concentrating on its rescue and recovery plans, UWCA is equipped to process online donations that will be available to the victims faster. Our focus now is setting up a disaster reception center to register and organize all the volunteer groups that are helping with the rescue and recovery, “ said Benton.

To help with the rescue and recovery, visit https://www.uwca.org/helpleecounty/. Some short-term assistance will be given immediately, but it won’t cover all the needs of those impacted. The wide range of needs won’t become clear for weeks.

Jones said the twister traveled straight down a county road in the rural community of Beauregard and that the path of damage and destruction appeared at least a half mile wide. He said single-family homes and mobile homes were destroyed, adding some homes were reduced to slabs. He had told reporters earlier that several people were taken to hospitals, some with “very serious injuries.”

Lee County Coroner Bill Harris told The Associated Press that he had to call in help from the state, because there were more bodies than his four-person office can handle.

The National Weather Service confirmed late Sunday a tornado with at least an F3 rating and a track at least half a mile (.8 kilometers) wide caused the deadly destruction in Alabama. Although the statement did not give exact wind estimates, F3 storms typically are gauged at wind speeds of between 158-206 mph (254-331 kilometers per hour).

Dozens of emergency responders rushed to join search and rescue efforts in hard-hit Lee County after what forecasters said they think was a large tornado touched down Sunday afternoon, unleashed by a powerful storm system that also slashed its way across parts of Georgia, South Carolina and Florida.

Radar and video evidence showed what looked like a large tornado crossing the area near Beauregard shortly after 2 p.m. on Sunday, said meteorologist Meredith Wyatt with the Birmingham office of the National Weather Service.

“It appears it stayed on the ground for at least a mile and maybe longer,” Jones told the AP.

After nightfall Sunday, the rain had stopped and pieces of metal debris and tree branches littered roadways in Beauregard. Two sheriff’s vehicles blocked reporters and others from reaching the worst-hit area. Power appeared to be out in many places.