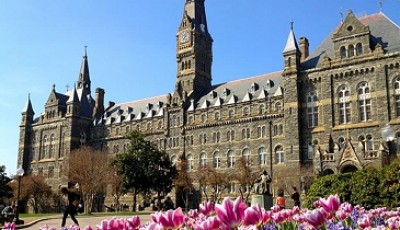 Some African-American studies professors are praising Georgetown University undergraduate students for passing a referendum to assess students a semesterly fee to fund reparations for descendants of nearly 300 slaves sold by the university in 1838 to help the school stay afloat.

“I couldn’t be prouder of the Georgetown students,” said Dr. Maurice Jackson, an associate professor in the history department and African American Studies Program. “They took the issue and put it to a vote.”

The unprecedented action “thrilled” longtime reparations proponent Dr. Raymond A. Winbush, a research professor and director of the Institute for Urban Research at Morgan State University.

“Georgetown students are very ahead of the game,” said Winbush. “They are saying that they are willing, as students at the university, to pay for what our ancestors did to Black people. Georgetown would not be here today if it were not for those 272 enslaved Africans who were sold by the university. I’m very, very proud of the students. They could have avoided this, but they stepped up to the plate.”

In the ballot question crafted by the Georgetown University Student Association in collaboration with an on-campus student group named GU 272 Advocacy Team, more than 3,800 members of the student body voted online Thursday to institute a student fee of $27.20 each semester to create the reparations fund.

The voter turnout of nearly 58 percent was the highest student government voting rate ever, student newspaper The Hoya reported.

The vote, which is nonbinding and needs approval by the university’s board of trustees, is the culmination of events that began to unfold years ago. The university formed a working group in 2015 to address how to deal with their historical ties to slavery, a step taken by numerous elite colleges and universities in recent years.

At a well-attended town hall on campus earlier this month, attendees heard remarks by speakers on both sides of the issue.

Jackson and Winbush suggested that the headline-grabbing vote by Georgetown students could pressure the university to come up with more direct monetary remedy.

“It can only make the people who run the university think more about how to respond,” said Jackson. “It’s not about putting money in pockets, but addressing the issue. Student activism ignited this. They thought the university should do more, or didn’t know all that was being done.”

In a statement issued after the vote, the university’s vice president for student affairs, Dr. Todd Olson, said Georgetown has been working since 2015 “to address its historical relationship to slavery and will continue to do so. Georgetown has taken initial steps to seek reconciliation, beginning with offering a formal apology to Descendants; renaming two buildings, including one for Isaac Hawkins, the first person named in the 1838 sale; and offering Descendants the same consideration in admissions that it gives members of the Georgetown community.”

The statement also said: “In recent months, a group of students, Descendants, faculty, and administrators have been meeting to deepen our campus’ engagement with the history of slavery at Georgetown. Students have brought forth a number of ideas related to education and campus engagement that we are working together to implement. We will soon be hosting a series of events to mark D.C. Emancipation Day, opening a new exhibit featuring work from the Georgetown Slavery Archive, and exploring new curricular options for students to engage with our history starting in the next academic year.”

Winbush described the efforts as “symbolic” and said they don’t go far enough, adding that the university should provide more “tangible” support for the slave descendants.

“The university has been dragging its feet,” he said. “Students did in a few months what the university has not done in four years. Why can’t the administration, who has, to me, a greater responsibility to lead and be role models for ensuring justice, why can’t they come up with an equitable solution? In perpetuity, descendants who get admitted should not have to pay one cent. It’s good to have symbolic things, but show me the money.”

Citing similar student activism elsewhere – including a recent reparations demand by the Association of Black Seminarians at Princeton Theological Seminary – Winbush predicted a “ripple effect” across the nation reminiscent of the highly visible student activism in the 1960s.

As recompense for Princeton’s reliance on the trans-Atlantic slave trade, the student group is requesting that a minimum of 15 percent of Princeton’s $1-billion endowment be used for grants and scholarships for Black students and to fund an endowed chair and expansion of the Black Church Studies program.

Winbush called such student initiatives “refreshing” and added that there may be implications for the 2020 U.S presidential election.

In fact, reparations is one of the issues being addressed by Democratic primary candidates. Several have said they would support some form of reparations.

Last week at the National Action Network annual convention in New York City, the civil rights organization’s founder, the Rev. Al Sharpton, asked candidates who came and spoke if they would sign a reparations bill should Congress pass one. All of the leading contenders said they would, including Bernie Sanders, Elizabeth Warren, Kamala Harris, Cory Booker, Beto O’Rourke and others.

Efforts to introduce reparation legislation for American descendants of slaves date back decades, but no effort has been successful. The idea appears to be gaining some traction and U.S. Representative Sheila Jackson Lee of Texas, has introduced legislation to create a commission to study reparations.

Other aggrieved groups ranging from Native Americans to Japanese Americans have received government-funded reparations for injustices against them, Winbush said, so demands on behalf of American descendants of slaves should not be seen as unusual.

“Reparations are just as American as apple pie,” he said.

Two Georgetown students who are descendants of the slaves – sophomore Melisande Short-Colomb and graduate student Elizabeth Thomas – were active in advocacy team efforts.

“I’m so proud of all of these students who are engaging in this process…somebody is going to write a thesis on this referendum one day!” Short-Colomb wrote in a recent Facebook post.

“Every bit of change happens when young people step up to lead, usually because there has been a dearth of decency and genuine positive leadership shown. Our leaders fail us…so now we show what leadership looks like.”

Monica Levitan contributed to this report.