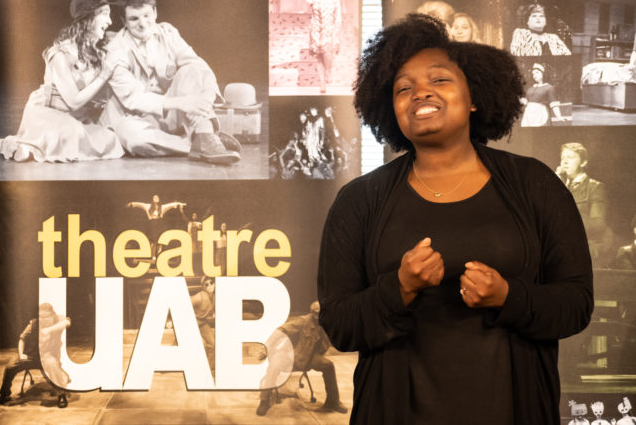 For those in the West End community who’ve never taken a trip to New York City’s Broadway to see popular stage shows, last week Broadway came to them.

Students from the University of Alabama at Birmingham (UAB) Department of Theatre, known as Theatre UAB, performed at the Birmingham Public Library (BPL) West End Branch on March 29, presenting “Broadway Today!”—a medley of contemporary songs currently on Broadway and in movies.

Royzell D. Walker, a senior from Cincinnati, Ohio, who is majoring in musical theatre, said it was great to give back through theatre.

“Theatre is a form of expression,” he said. “Through singing, dancing, and acting, we can forget about our lives for just one moment and explore someone else’s life and conjure experiences that we’re facing into the character.”

Theatre is also about community, Walker said: “When we travel with this tour, we are meeting different kinds of people who we can connect with and work with in the future to help out when needed.”

Eboni Booker, from Toney, Ala., a senior majoring in musical theatre with a concentration in premedicine, agreed.

“It was fun,” she said. “When we’re in a smaller space, I feel like we have the opportunity to connect more directly with the audience.”

West End Branch Library Manager Maya Jones said theatre is an art medium people enjoy because it features music and songs to which they can relate.

“This particular Broadway production had quite a few songs from ‘Frozen’ and ‘Hamilton.’ I think that really reached out to the younger generation, and … they, as well as people who are older, really appreciated that,” she said. “It’s a program for all ages, and I think it’s something new and different to experience for personal enjoyment and lifelong learning.”

The program featured songs from shows, such as “Hamilton,” “Frozen,” “Anastasia,” “Dear Evan Hansen,” and “The Greatest Showman.”

Booker said it can introduce theatre to those who “may not think, ‘Theatre is [my] thing.’”

“Like we say in our tour, theatre has a way of reaching people like no other thing can because these stories are about human beings that are just like you and me,” she said.

Walker added, “If people are able to express themselves more, then those people are going to want to write and create nonfictional stories that need to be told and to join the conversation. We need … stories that humans can relate to and stories that history wants to remain untold.”

Theatre UAB also performs at middle and high schools and retirement facilities. Though the group has partnered with the library for other programs, this is the first time they’ve done Broadway, Jones said.

During the recent Broadway Today!” performance at the West End Branch Library, the group staged “Opening Up” from “Waitress”; “Waving Through a Window” and “You Will Be Found” from “Dear Evan Hansen” and a medley of songs from “Hamilton.”

Other performances at the branch have included “Taming the Bully Thing” and “The Diva Tour.”

Anita Jones, a West End community resident and Jones’s mother, said she attended the event because she loves Broadway.

“I recognized where some of the songs came from, but I’ve never seen the Broadway shows, so that’s why I enjoyed it,” she said.

The West End Branch Library partners with UAB not only for theatre but also for several other programs throughout the year, including story time for children ages 8 and under and tutoring by UAB Honors College students.

“We have youth chess, as well as a crochet class on Wednesdays for anybody from beginner to intermediate and advanced crocheting,” said branch manager Jones. “This month, we’ll have a teen genealogy class, [so] our teens [can] learn about genealogy and how to do that research. We have something for everyone, people of all ages.”

The library is for more than traditional materials, such as books, magazines, and newspapers.

“We’re also here for programming, things that are fun or things that teach certain skills … people might have an interest in,” Jones said. “[The library] really makes a difference in people’s lives.”

Birmingham Library hosts first ‘Reading Between the Wines’ on Friday