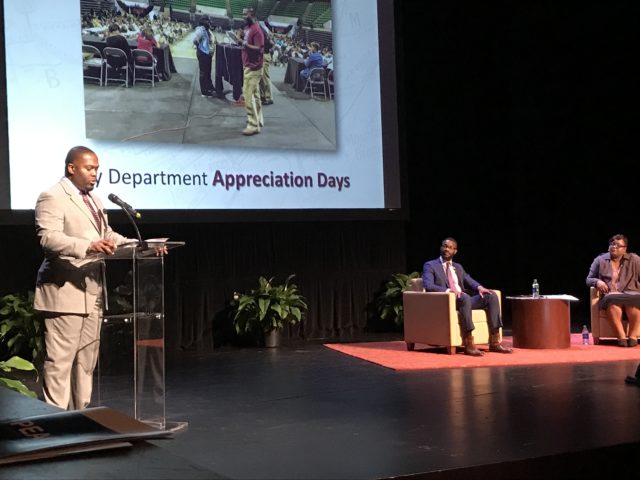 In October 2018, Birmingham Mayor Randall Woodfin released his strategic plan which focuses on six goals to better Birmingham. When he released the plan, he promised a six-month update. Last month, the mayor presented the update titled “The Big Picture” at the Alabama School of Fine Arts Mae Jemison Theater.

“I want people attending this event to have a clear understanding of where we are with progress of our plans for Birmingham,’’ said Woodfin, during the 90-minutes program. “We have remained committed to our core values and we will continue our work as we push to put people first.’’

“Our goal was to ensure that we build a solid foundation for our long journey and that . . . included three phases which were clean up and catch up, review and reestablish and reorder and restructure,” said Sparks. “This approach allowed us to dig deep into long-standing Birmingham City Government practices and institutional norms.

Sparks said the goal is not to “throw out the baby with the bath water” but to take a look at addressing the current and future needs of the city that are aligned with the mayor’s mission and core values. “There were a few cultural norms that we instituted,” he said. “We said we desired to be the administration that dealt with no mess, no junk and no drama and if you brought it, it had to go and you had to go with it. We decided to be an administration where employees could look forward to coming to work where we created a positive work environment.”

That means improving the personnel board, boosting morale and protecting employee pensions and creating an office of customer service.

“We have recently launched the Office of Social Justice and Racial Equity, and have successfully created the LGBTQ advisory council [and] the Human Rights Commission has begun its work,” said Gilmore.

She added that community members are actively helping to create a vision of equity and access for all residents regardless of race, religion, sexual orientation or gender.

The Office of Social Justice and Racial Equity is comprised of the offices of Peace and Policy, Cultural Preservation and LGBTQ. “The work of these offices all strive to create an equitable distribution of resources and to ensure that all residents of Birmingham are physically and psychologically safe and secure,” said Gilmore.

Woodfin has recently appointed individuals to the Birmingham Civil Rights Institute (BCRI) accountability advisory task force which is to assist and advise the mayor on the city’s upcoming management agreement with the institute in the wake of the fallout with the Angela Davis controversy. Earlier this year, the BCRI rescinded the Fred Shuttlesworth Human Rights Award to international scholar and activist Angela Davis, which sparked national outcry.

Several other initiatives are underway such as the Birmingham National Civil Rights Monument in collaboration with the National Park Service, the Jefferson County Memorial Project and the restoration of the historic A.G. Gaston Motel. Late last month, city officials announced that exterior renovation of the historic A.G. Gaston Motel in downtown Birmingham could begin as soon as June.