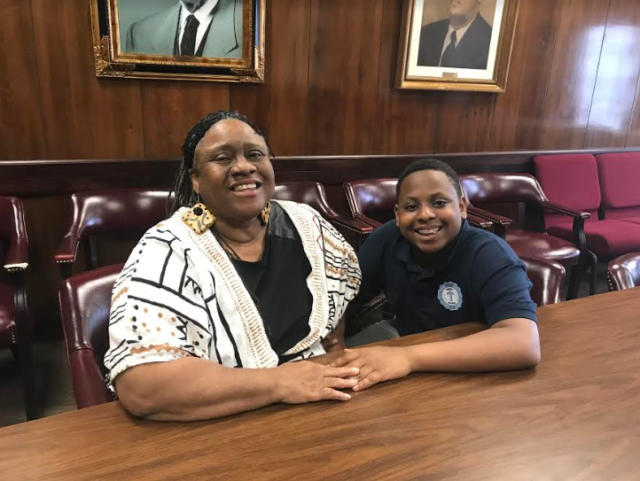 “Her boyfriend called me and said, ‘Come quick.’ I asked, ‘What’s wrong? Javonti?’ He said, ‘Yeah. … Hurry up, mama! Hurry up!’ By the time I got there, the ambulance was there,” said Barnes, who recalled that she could barely see her daughter because the paramedics wouldn’t let anyone into Javonti’s room.

The paramedics stayed at the house for almost an hour before taking Javonti to the hospital. Barnes and her grandson, Deon Arnold, 12 at the time, followed behind in the car.

“I remember him asking me, ‘Grandma, what if she doesn’t make it?’ I said, ‘What do you mean?’ He asked, ‘What if she doesn’t make it? What about us?’ I said, ‘We’re gonna be OK. We’ll be fine.’ We kept praying, and he wasn’t crying or anything,” said Barnes. “We got to the hospital and sat there for another hour or so before the doctor came out. I asked, ‘What’s going on?’ He said, ‘Well, she didn’t make it.’ Just like that.”

Doctors believe Javonti’s death may have been heart-related but did not give a definitive cause. Family members who were present broke into tears at the news of Javonti’s passing, and Barnes remembers consoling her grandson, Deon, her daughter’s boyfriend, and others.

At the time of her daughter’s passing, Barnes was part of the Sixth Avenue Baptist Church Congregational Care Ministry, which provides support for those who are sick and home-bound, as well as those dealing with loss and grief. After working daily with people in grief, she now had to deal with her own.

“The other ministerial staff assumed a lot of roles and responsibilities during the time I was grieving, and my pastor gave me extra time off,” Barnes said. “All the ministers here [Sixth Avenue Baptist] at some point have been involved with the grief process, as far as helping the others. They responded to me pretty well. It could have been worse, but people tend to give you time for healing, and that was helpful. Everybody was so supportive.”

Barnes recalled the last Thanksgiving her family celebrated in Javonti’s new house, not long before she passed.

Barnes, 64, said she finds peace in knowing that, “God has given … sufficient grace” to her and 13-year-old Deon, who she now raises.

“It broke my heart, but you do what you have to do,” Barnes said. “As my pastor said, ‘God gave me sufficient grace to handle it,’ but I was really surprised with Deon because God gave him tremendous grace. At his mother’s funeral, he asked if he could say something. It was surprising because we hadn’t planned for him to say anything. He got up there and said, ‘Let me tell you about my mother …’ and talked about how his mother didn’t play.”

After her daughter passed, Barnes began taking care of Deon while still working as a Congregational Care minister, a position she held for about eight years before she lost her daughter; she also served the church in other capacities as a Children’s and Youth minister. As a Congregational Care minister, Barnes would team up with the Grief and Loss Ministry to host once-monthly peer-support groups, as well as bring in a professional counselor once a quarter to talk to families about grief. The groups also hosted a “Hope for the Holidays” event to help families through their first holidays without their loved ones.

“It was very important to the congregation. People really expressed their appreciation for us because they felt that they needed [help] at that time,” said Barnes, who retired on Dec. 31, 2018, to spend more time with her grandson.

Deon remembers his mother’s infectious smile: “She had a pretty smile. It would light up a room.”

“We would go to [World Wrestling Entertainment (WWE)] matches, … [and] she would always get scared. It was funny,” he said. “When we got the new house, she was so excited. When we went out of town to Kansas City, she coordinated the family reunion and everything went well for it, so she was happy about that. She loved to go on vacations. We went to Florida, and then we went to New Orleans.”

Taking care of Deon, has been a joy for Barnes, who is often surprised at the way he handles situations. She said his magnetic personality has a way of touching many.

“One day, I brought him over here to [Sixth Avenue] when [Birmingham Mayor Randall Woodfin] was [conducting] a town hall meeting at the same time we were having a congregational meeting. Deon stayed in the fellowship hall, [where the mayor’s event took place]. After my meeting was done, I returned to the fellowship hall to get Deon—and there he was with the microphone in his hand. From then on, he’s been tasked with getting together a group of his peers so they can address ways to help the mayor address crime.”

In addition to helping Mayor Woodfin find ways to reduce crime, Deon also had the opportunity to serve as Youth Mayor at the Birmingham Police Academy graduation last month. Deon said he and the mayor have been friends for “a long time.”

“It was a lot of fun being Youth Mayor because I got to go to and speak at the police academy graduation. I gave the police their badges, too, so it was a good time,” Deon said. “A few friends came to record and support me there, as well, but the mayor and I go way back. He and my mom were childhood friends. He told me to let him know if I ever need anything. We’ve always been friends, and we got closer when he heard about my initiative to help stop crime. … That’s how I was able to be mayor for the day.”

In January, Deon started The Solution, an organization focused on violence prevention, with help from his youth minister at Sixth Avenue Baptist Church, Leticia Watkins.

“We talk about resolving conflict, controlling anger and other emotions, and how to stop violence. We want to teach these things to younger kids,” said Deon, a seventh- grade student at St. Barnabas Catholic School. “I wanted to start this with my mother because we would watch the news and see people getting shot. … I knew we had to do something about it, so I did this.”

Barnes serves as Deon’s driver, secretary, and typist, she said: “I’m the one capturing everything that happens. He will run things by me to see if they make sense and to see if they align with the city’s plan against crime.”

Aside from working with his new organization, Deon stays busy playing basketball. He also wants to be an actor, so he recently started taking acting classes.

“I don’t play for a [basketball] team anymore. I did in the past, but now I’m just practicing. I do drama, too, because I want to be an actor. I’m focused on everything,” said Deon, who also is interested in becoming an attorney.

Barnes supports her grandson in all of his endeavors and is currently helping him plan The Solution’s first event, which will share the message of nonviolence and conflict resolution with young people.

“We’ll post it on social media to get the word out and then have the event in June,” said Deon. “That’s the plan.”

Barnes said she wants Deon to fulfill his God-given purpose in life.

“The scripture says, ‘Train up a child in the way he should go,’ and I want to make sure Deon’s heart’s desires are addressed and that he can truly answer the calling that God has on his life,” she said. “Our children can be like arrows in a warrior’s hand. We can choose to shape them and sharpen them so they can be shot toward fulfilling their goals.”