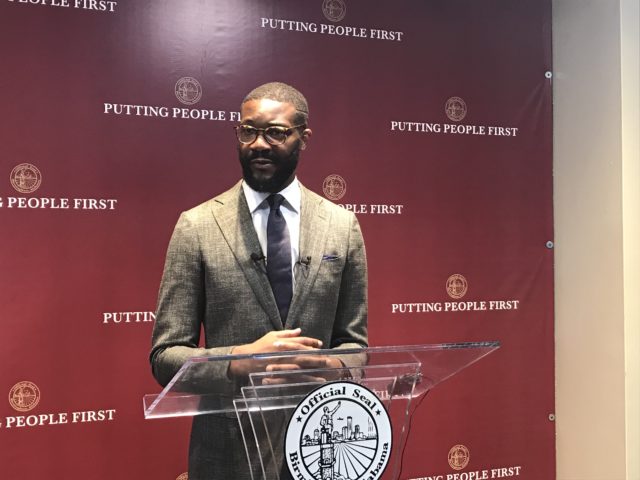 Birmingham Mayor Randall Woodfin on Tuesday proposed a $451 million fiscal 2020 budget that includes a focus on neighborhood revitalization and an increase in the pension fund for city employees.

The budget is a 2.4 percent increase over the $440 million fiscal 2019 budget approved last year by the City Council. The fiscal year begins July 1.

The budget projects tax and license revenue increase of $6.5 million over 2019 which will be combined with $3 million of commercial construction fees and revenue from the state’s recently approved gas tax.

Up to $14 million in this year’s budget will go to neighborhood revitalization in the form of demolition, street paving, weed abatement and the Birmingham Land Bank Authority, which returns vacant, abandoned and tax-delinquent properties back to the tax rolls, the mayor said.

“These things are important as it relates to the issues I still hear when I’m addressing residents, whether it’s at a neighborhood meeting or church or at their door, [they’re saying] ‘mayor, please pave these streets and please tear these houses down,’” said Woodfin, who delivered his budget message to the council on Tuesday and residents at the Birmingham CrossPlex later in the evening.

Woodfin said his administration is not just talking about the concerns but the money that is in the budget reflects solutions.

The city is not proposing a cost-of-living adjustment (COLA) this year because of the money put toward areas such as merit pay ($3 million), health insurance ($3 million), longevity pay ($2 million) and the pension ($5.8 million) which totaled $13.8 million, the mayor said.

“We did not do a COLA this year, but it doesn’t mean we won’t do one next year, it means this year with the tough decisions we had to make including the number one priority of filling the pension, we couldn’t do all five at the level we wanted to,” he said.

Merit pay is performance-related pay that provides bonuses for workers who perform their jobs effectively according to certain criteria.

As for the pension, he said, “our greatest asset is our city employees and they deserve to have a fully-funded pension and I’m happy to say the city’s portion of meeting our obligation, we will actually meet in this budget. I would say tied for first place in this budget’s priorities were paving streets and our pension funding and we met both.”

Highlights of the mayor’s proposed budget include:

The spending plan has no funding for non-profit organizations, although the mayor said the city continues to support non-profits, but the focus has to be on public safety, he said.

The mayor also announced The Birmingham Promise, which represents a $2 million commitment to secondary and post-secondary workforce development, creating apprenticeships and real opportunities for the city’s youth as they enter the job market.

“It is past the time as a city we commit to workforce development and the best place is to focus on our young people,” he said.

The mayor also is proposing to increase the discretionary fund for each council district to $100,000 from $50,000.

The budget reflects a $700,000 increase in the Land Bank which has been in existence for about five years and the same amount of money has been in it every year, Woodfin said.

“We wanted to show neighborhood revitalization isn’t just about tearing down houses, you have to remove the blight but you don’t want a city that’s snaggletooth,” he said. “At some point you have to go back vertical on these empty lots which includes affordable and single family homes and when you add an additional $700,000 that sends a signal to this community that we’re serious about this land bank and it also puts me in a position to be able to go out here and talk to certain stakeholder groups and say the city has shown its commitment for its land bank.

“We’re showing our commitment to neighborhood revitalization by increasing the rate of moving these properties off the tax delinquency and moving them towards going back vertical on this empty lots,” he said.

The proposed operating budget and capital budget for the 2020 fiscal year can be found at www.birminghamal.gov/budget2020.