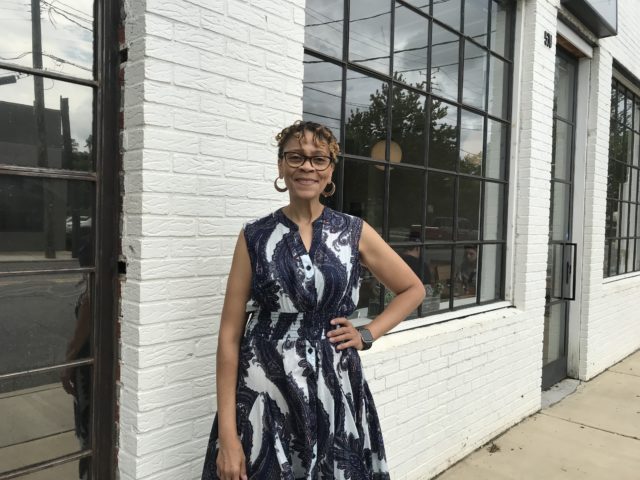 Angelia Strode had the first of her three heart attacks in 2008—and she didn’t know it was a heart attack.

She recalled, “I was preparing a meal and feeling good, but my left arm was hurting. … I told my mom, ‘I’m not feeling well.’ She asked if she needed to call the paramedics, and I told her, ‘No. Just wait.’ I asked her to get me some aspirin, and then I started perspiring profusely, … my head was drenched, … and I’m like, ‘Something is not right.”

Strode took a shower and started feeling better. Then she went from sweating to having chills, so she decided to just sit down and relax for a while. She eventually drove herself to a hospital emergency room, where the staff asked her questions about her pain and what she had done since that morning.

“They said, ‘According to your enzymes, you’ve had a heart attack,’” Strode said.

In 2014, she had two more heart attacks—five days apart.

Today, Strode, 53, is ardent about educating women on health, especially when it comes to their hearts. She also is a volunteer with the American Heart Association and the American Red Cross, a group she’s been involved with since her teenage years.

Strode, a Birmingham native of the East Lake area, said she knows why she survived three heart attacks before the age of 50: “God has me here for a reason, and the reason is I should be here.”

“The best gift I got was that I got my life,” she added. “I’m grateful to God for everything He has done.”

After that first heart attack, Strode said she followed her doctor’s instructions by taking her medicine and living a healthier lifestyle. Then, suddenly, she was hit with a second heart attack six years after the first.

“It was a normal day,” she recalled. “I woke up that Thursday morning, and my left arm started hurting again. I didn’t have any warning signs or anything like that. I had been working out. I had been doing everything I needed to do to live a really healthy lifestyle: eating right, exercising. I always had a sort of stressful job, but you just cope and deal with it. I went to the hospital, they said, ‘Yes, your enzymes are up. You’ve had a heart attack.’

“They went in and found the clot and said it was located behind [my] heart, so they couldn’t clean it out like they [had done] with the first heart attack. They weren’t able to stent it, [insert a tube in the affected blood vessel to keep it open], … so they said, ‘We’re going to give you IV drugs to clear the clot.’”

Strode stayed in the hospital for about two days before being released. She was feeling fine.

When she returned to work the following Monday, she started feeling bad again. She wasn’t sure if it was another heart attack or her acid reflux, so she took her medication to stop the heart attack. She drove herself home and realized she wasn’t getting any better. That was Strode’s third heart attack—and she hasn’t had another since then.

“Each time, it was nothing but God,” she said. “I didn’t have high blood pressure or cholesterol problems before the heart attacks, but [now] I do. … At one point, I was on like 10 different medications to deal with my heart and my high blood pressure and cholesterol, but now I’m down to about five. … For my heart, I’m taking aspirin only.”

Strode, who currently works for the Birmingham City School Board in the superintendent’s office, encourages women to listen to their bodies.

“When I had the first [heart attack], I had been feeling it and probably had mini heart attacks for two weeks before I had the major one,” she said. “I [felt] God was saying, ‘I’m trying to give you this hint,’ and I would say, ‘I will make an appointment later if it gets worse.’ Well, the worse was I had a heart attack.”

It’s important to know your family history, too, she said.

Strode spreads her message about heart health through the American Heart Association, and she volunteers with other organizations, including those focused on breast cancer awareness, as well as the American Red Cross, the United Way of Central Alabama, and Children’s of Alabama.

Her work at Children’s has been special, Strode said.

“My niece was diagnosed with a brain stem tumor, and they were able to remove 95 percent of the tumor. She was an ice skater …, and the Make a Wish Foundation gave her new ice skates, [which] would run like $400 at the time. … They bought her a brand-new pair and supported her. She’s 37 now,” Strode said. “I still do anything I can for both United Way and Children’s [of Alabama].”

Strode, who is very active with her sorority, Alpha Kappa Alpha Sorority Inc., Omicron Omega chapter, said she has learned to “always see my glass half full and … try to find the good in people.”

She encourages people to “find the good in yourself.”

“[One of my favorite quotes is], ‘You don’t know what your smile can do for a person,’ so I always smile because it makes your heart happy.”