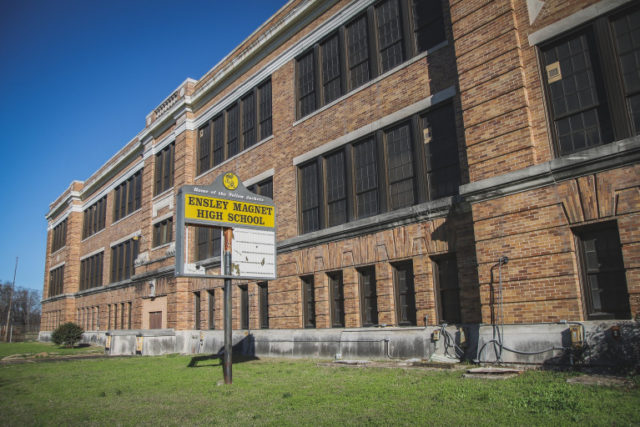 The Birmingham City Council voted Tuesday for the city to purchase for $50,000 the former Ensley High School, which has been vacant since the 2005-2006 school year when students were transferred to the new P.D. Jackson-Olin High School.

The agreement is between the city and the Birmingham Board of Education. The former Ensley High School, at 2301 Avenue J in Ensley, caught fire nearly a year ago and was severely damaged.

City officials have not said what they will do with the property.

Councilor Steven Hoyt said he at one time wanted the building  preserved for possible residential use since the fire the city can find another way to benefit.

“I used to think that we could preserve it before it caught fire for single housing because Birmingham is in need of some single-family housing… but I want us to salvage the property, I don’t want us to give it to a developer and we not maximize the profit we can make from purchasing this property,” Hoyt said.

The councilor believes that the city can sell remnants from razed building.

“I think we have the equipment to demolish it but also to salvage the bricks… I just think we maximize that effort because I could tell you that we saved millions of dollars when we decided to eradicate some of the units at Elyton Village because they had clay roofs,” said Hoyt. “We got the money from that, millions of dollars from those clay roofs so I’m saying here we got the brick, the iron, the steel or whatever else is in the building, let’s salvage that stuff and make money off that.”

Mayor Randall Woodfin said the purchase must be completed before a decision is made on what will happen with the property.

The city plans to issue a request for proposal in the last quarter of 2019 or first quarter of 2020 with the goal of partnering with a possible developer and about what the next steps are, said the mayor.

“What’s in front of you is between the city and the school system for us to purchase the property. We look forward to working with the school system and engaging Ensley alums to make sure they can take some portion of what existed there.”