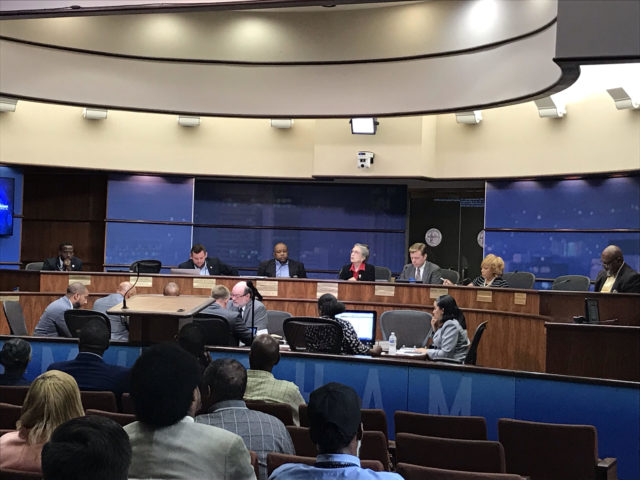 Birmingham City Councilor Steven Hoyt on Tuesday suggested that the city call in the National Guard to deal with crime.

Hoyt made his recommendation less than 24 hours after a homicide took place in Belview Heights, the district he represents, and four days after the city’s “Peace in the Park” initiative kicked off.

“I’m just concerned and neighbors are very concerned about the killings that have taken place in Belview Heights specifically and in Ensley and I just need to know a plan,” said Hoyt.

“Growing up, my mother told me if you don’t know how to do something, ask somebody and get some help . . . Maybe we should call the National Guard… New Orleans had this problem and called the [militia] maybe we should do that but our young people are dying by degrees.”

Mayor Randall Woodfin said police have taken more than 500 guns off the street since the start of the year and police presence has increased throughout the city.

“I wish we had the power to put a police officer on every corner but I don’t think that’s what residents want,” Woodfin said. “I think they’ve appreciated our police presence . . . and our aggressiveness in taking more guns off the street. I wish we could live in a city where there were no murders… We’ll continue to throw every resource at that problem, not just technology but with our police presence.”

“When I became chief, we were down 141 officers and we’ve been able to turn that around with our hiring, retention . . .  and next month we’ll graduate 31 officers and also start a class of 47 so we’re addressing the numbers,” he said.

Smith said the city has been on a “five year path” that has seen homicides double.

“We didn’t get here over night, there’s no magic wand, there is no quick fix or special potion that can be sprayed over the city,” he said. “What it is going to take is diligent, hard work every day by our officers and I think that we’re engaging, we’re making those contacts, and we’re doing check points in every community all over the city. It’s going to take time for us address the crime trends in Birmingham.”

In a related matter Tuesday, Woodfin announced the Birmingham Police Department will host Coffee with a Cop later on Thursday, June 20 and Friday, June 21 as a way for police officers to meet more residents in the community.

“The whole idea is for the community to make closer connections with our residents and for residents to be able to sit down with the precinct captains and build relationships, build trust, engage in dialogue and share concerns as well as ideas on how to reduce crime or crime prevention in their areas,” said the mayor.

The schedule for Coffee with a Cop are as follows: