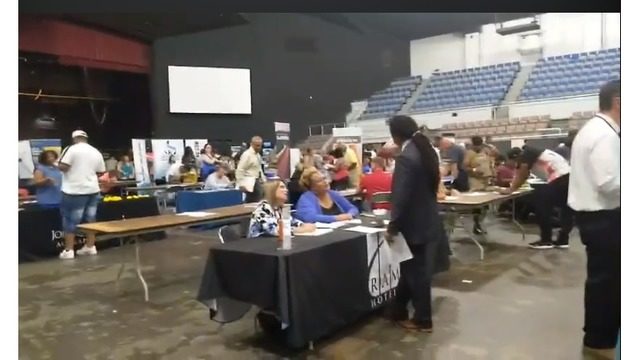 Kevin Bolden came to the Boutwell Auditorium in downtown Birmingham on Friday looking for a second chance. He found one.

Bolden said he was released from prison 11 years ago and has been making a living as a barber, but said he needed more.

However, there are challenges when a person with a background applies for jobs, he said.

“Instead of just going in, you know you go in and you fill out your application people search your background and it’s a different story,” said Bolden.

Walter Turner, who owns and operates STS/Prideline, gave Bolden an opportunity to become a truck driver for the company and help Bolden provide for his wife and children.

Jefferson County District Attorney Danny Carr organized the “Second Chances Hiring Fair” to help ex-offenders get back on their feet.

“We’re empowering people,” Carr told www.cbs42.com. “People talk about fighting crime in our communities and one of the best ways to fight crime is by changing the trajectories of people’s lives. Today we’re trying to do that.”

More than 300 convicted felons showed up, filled out applications and got a chance to meet with more than 100 businesses that ranged from electrical companies to the automotive industry as well as county government and other entities.

Carr said the recidivism rates are high for ex-offenders because it’s often hard for people once they get out of prison to find jobs. He pointed to a number of benefits of the fair.

“One of the narratives we talk about is prison overcrowding so we’re effecting change in that area also,” he said. “We’re trying to keep people out of prison and we’re trying to lower the recidivism rate, and we’re trying to make out community safe by employing them . . . so this is just a common sense approach.”

Carr said he was happy to see companies like STS/Prideline offer employment.

“You have to recognize that good people make mistakes, but they deserve second chances,” Carr said. “Those individuals are the hardest workers. They are the most diligent workers because they recognize and understand things can be taken away from you by one decision. They appreciate it more.”

The DA added that the ex-offenders should make the best of the fresh start.

“We want to make sure they understand you can do better, you can be better you can be productive and you can go back into your community and empower people,” Carr said.