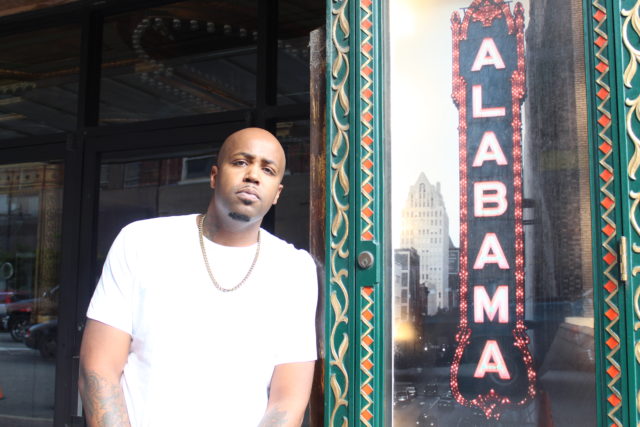 Growing up in Alabaster, Angelo “Druex Kaine” Lacey knows how tough it can be for independent artists to make a name for themselves.

“I make music with the hopes that it will bridge the gap [for music makers] of yesterday’s and today’s generations,” he said. “Coming from Alabaster as an independent artist, I know there are only so many channels and resources presented to get your music to the masses. I want to bridge that gap. I want to inspire other indie artists to cut the labels out, do it themselves, and be [their] own brands.”

The Thompson High School grad has produced music and engineered for many of the Birmingham area’s top recording artists, including Joe Clark, Skoolie Escobar, Klub Monsta, and G.I. Magus. Lacey got his start at New Vision Christian Church in Helena, where he was a drummer.

“[I played drums] for so long that … I can read percussion notes, but I’m a self-taught keyboardist and guitarist,” he added.

Lacey, 33, said he was introduced to the studio by his older brother and fell in love with “studio life.”

“I’ve literally been sitting in a [studio] making music for more than 15 years,” he said. “I started in 2003, messing around with FruityLoops [music software, now called FL Studio]. Then my brother bought a studio and had a keyboard …, [which] he gave to me. … [In 2004], somebody showed me how to make my first beat. I started off in hardware using the [Korg] Triton Studio WorkStation, [used by mainstream producers like] Pharrell and Timbaland, and started making my own beats.”

As time went on, Lacey mastered creating digital sounds and built his own recording studio in Alabaster, where he now makes music. When it comes to creating for other artists, Lacey said he doesn’t have one particular genre.

“I’ve done hip-hop, soul, neo-soul, R&B. [I’ve] worked with different kinds of artists that challenge me and make me think outside the box, but I have my own sound,” he said, adding that he is an Avid Pro Tools Certified operator and has interned as a studio engineer at Birmingham’s WorkPlay.

When it comes to his own work, the hip-hop artist and music producer and engineer said he raps about what he knows.

“I’ve talked about my struggles as a man: my brother selling drugs and going to prison; my siblings almost killing each other,” Lacey said. “I’ve experienced a lot in my life, and I speak on what can be verified. I put what I lived through into my music and speak on real-life situations.”

Many of today’s mainstream rap artists fall under the “mumble rap” category, which is a style of rap in which the rapper’s lyrics are barely audible. Lacey—who says the “Druex” in his stage name means “to be drawn in” and the “Kaine” means “to be addicted to my music like cocaine”—said he does not mumble rap.

“I choose to use a more-structured thought approach when it comes to [composing] my rhymes,” he said. “I’m a relatable hip-hop artist, not a mumble rapper or one of those artists making up fabrications about their own life. Everything I put into my music is 100 percent authentic.”

“That was really big for me because he actually called me back up on stage and told me I really set the tone for his set. I’m really serious about my craft. I’m not out here playing around with it,” said Lacey, who is currently working on a few music projects, including the soon-to-be-released “Southern Nights” and “Reality Check,” which he expects to release later this year.