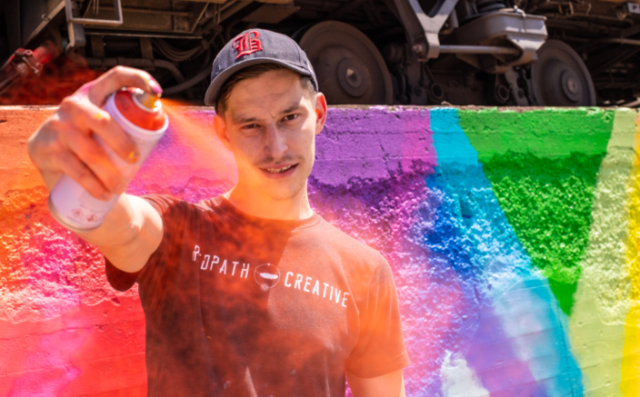 When Marcus Fetch arrived in Birmingham in 2012 with $50 to his name, he saw the city as another stop among places he was passing through. He grew up in from Omaha, Neb., and was always on the move, living on the road, never staying anywhere for more than a couple of weeks. He traveled and lived in a van and “worked construction whenever I ran out of money,” he said.

That’s what got him to the Magic City in the first place. Some of his friends connected him with a construction worker who could provide employment and when Fetch arrived in Birmingham from New Mexico, his previous stop, “I just met a lot of great people in town [and] felt like I should stay,” he said. “I saw a city that was about to resurrect, so I was very lucky.”

In his own way, Fetch has played a part in beautifying Birmingham. The 30-year-old is originator of Color Bham and owner of RedPath Creative, which creates “public mural events that people can feel like they’re a part of,” he said.

Fetch and the RedPath Creative team have designed some of the city’s most popular wall paintings, including the “Wings of Avondale” mural outside Melt Restaurant in Avondale; the “Mural of Hope,” in honor of the Hope for Autumn foundation that raises money for families battling childhood cancer; and “Eyes on Birmingham” on First Avenue North.

One of his most recent is the “World Games 2021” mural at The Waites apartment building on Richard Arrington Boulevard, between University Boulevard and Seventh Avenue South.

On Saturday, June 2, Birmingham residents were invited to help participate in the making of the new 500-foot long “Rainbow Wall” on Morris Avenue in downtown Birmingham.

“Instead of being known as this black-and-white racial city, [we can be known] as this colorful city,” Fetch said.

Murals are a way to improve the quality of life: “There are blank walls, earth-tone colors all over the city,” he said. “Whenever you do something vibrant, colorful that really pops out, it makes a statement, a difference.”

Fetch’s impact on Birmingham goes beyond murals. In 2013, he founded the nonprofit Redemption Cycles because he noticed the number of homeless men he saw at church who needed rides.

He created the Earn-a-Bike program, through which people can volunteer for 12 hours and get a free bicycle.

“Redemptive, now, is huge,” Fetch said. “The bike shop in itself is a nonprofit that acts as a full business, selling bikes and doing repairs and stuff. We also sell tons of used bikes [that] people donate [to us]. That’s part of our fundraising mechanism.”

A sliding-scale repair program is in place, so people pay what they can to get bike repairs.

“A lot of times homeless [people] … don’t have any money, so it’s free,” Fetch said. “This year, we’re averaging over 30 grand [worth of free repairs], … probably [helping] like a couple thousand people who wouldn’t be able to get back on their bikes.”

Fetch has since given up his role as executive director but remains active on the board of directors for Redemptive Cycles. His main focus now is creating art and murals citywide.

Fetch started working on murals three years ago, while cleaning up the area around the bike shop.

“Murals have a powerful effect on the space,” he said.

That experience was so positive that Fetch began working within the community and with other artists around town. Eventually, he founded RedPath Creative, a small limited-liability company (LLC), with his business partner Sean Gilder.

“I couldn’t find other artists to paint, so I just grabbed some buddies,” Fetch said. “I first started designing really terrible stuff, but it was something, … it was colorful. The back alley transformed, and we started hosting our bikes rides back there. I really took the [one of the worst parts of] of town and made it this hotspot for young people, hipsters, bike riders, and artists—and people loved the murals.”

Fetch’s first mural was of the Mario Brothers cartoon in the alley behind the bike shop.

“That’s where I started doing a couple of my first pieces,” he said, noting that they were smaller works.

“I’ve always been creative, and I was doing graphic design and some other stuff, so I started to get more involved with designing the murals during our first couple of jobs,” he said. “Once we got into 2017, I made the decision that I was going to start painting more murals.”

Fetch painted his first big mural in 2016—a whale in the alley behind the Redemptive Cycles shop. His first paid mural, on First Avenue North and 39th Street, was of an old man’s eyes with a colorful hexagon.

Still, Fetch was not sure about being a muralist, so he worked with other artists to build a company under the name Blank Space before he “just started doing murals under my name.”

Fetch said he bought a lot of spray paint “and a lot of my own paint with my own money and my own time, … [and] painted stuff for free at first.”

He did enough to get his name out there, and the calls came in.

“I call myself a poor philanthropist,” Fetch said. “It’s not any dream job, … but it is. I get to do what I want every day, so who cares about the money.”

A year ago, Color Bham was born.

“I want to continue to create public-mural events that people can feel like they’re part of, so we can start placing a bunch of colorful landmark murals around town,” Fetch said.

In addition to making the Magic City better, Fetch wants to improve his skills.

“I have a personal goal of making my art a lot better than it is and painting some incredible murals,” he said. “I don’t know if I’ll always do community stuff because, if I have a family one day or something, I’ll be too busy. I’m sure that by then there’ll be some young bucks who have more energy.

“I’m trying to do as many murals as possible in the city, even if some aren’t as good as others because I have a firm belief that any mural is a good mural, as long as it’s not profane. That’s why community murals are a little bit easier, too, [because] you have help.”

“It was like go big or nothing … because … murals create an awesome impact,” he said. “I love how [the art] activates a space.”

Aside from bikes and murals, Fetch has another passion: he’s been a musician for 20 years.

“[It’s] something I’ve done since I was a kid. I can’t pull myself away,” said the musician and muralist, who has released an album on Spotify.

“My music is still very small and unknown. … It’s like indie folk, acoustic stuff,” Fetch said. “Hopefully, this next year or two, I think what I’m known for will begin to transition more into music. It’s funny because I was the bike man forever; now, I’m the mural man.”

Marcus Fetch on some of his notable murals

“I love all my murals,” he said. “Like you love all your kids, I don’t have a favorite.”

He will tell you which one was his most challenging: “The ‘World Games 2021’ mural was so big, [and] that was pretty scary.”

“It’s pretty frightening getting about 60 or 70 feet up in the air and trying to paint,” he said. “It was such a public mural … for a really large organization, [so] I was pretty nervous [and] scared to screw up.”

The mural, which is at The Waites apartment building on Richard Arrington Boulevard, between University Boulevard and Seventh Avenue South, was completed last year. It was so tall, Fetch said, “We had to get a bucket truck to get up that high.”

“We spend a couple weeks, it could even take up to two months, to solidify a design that the client wants,” he explained. “For [‘World Games 2021’], we gridded the wall, which is a pretty common practice. … You take a small image, create it one by one in squares, redraw it, … spray out the shape, and then paint the rest of it on.”

Even though Fetch said he doesn’t have a favorite mural, a few of his works stand out.

“I did a tree on the side of Good People Brewery for the Hope for Autumn Foundation … at [Children’s of Alabama]” he said of the “Mural of Hope.” “I designed a tree, and all the leaves are handprints from kids in [the hospital]. That was really special for me because that day we even had some kids … so far along [in their treatment] that they didn’t have hair. … They came straight from the hospital to put their handprints on the wall, so it was a really special, very emotional mural for me.”

Another touching work for Fetch was the “Before I Die” mural, downtown Birmingham on Morris Avenue in the First Avenue North Historic District, because as he was painting a friend of his passed away.

“The lady [in New Orleans, La.], who painted it was inspired to [do so] originally because a close friend of hers had passed away. Literally, the day I was out here painting, I got a call that morning [about one of my friends], so I went through a couple of days of dealing with grief,” he said. “I felt like I relived the original artist’s experience, so it became an important mural to me.”

Fetch said he enjoys doing art with nature, like the one of the hummingbird and a hand catching it in the Highlands area, but, he said, “I really haven’t painted anything I’m super-happy with yet.”