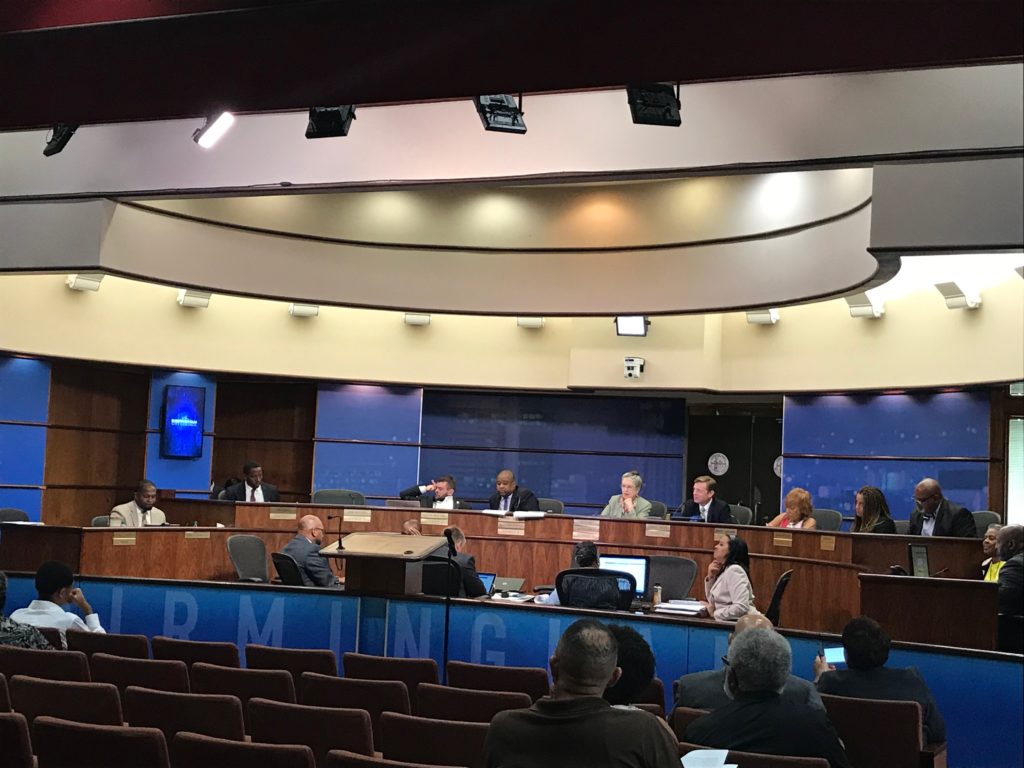 The council voted 7-1 to approve the operating budget and capital budget with Councilor Steven Hoyt as the dissenting vote. Councilor John Hilliard was absent.

The $451 million operating budget represents the Woodfin administration’s priorities of neighborhood revitalization and fully funding the city’s pension fund for the fiscal year, said the mayor.

Woodfin said the budget has an emphasis on neighborhood revitalization with $15 million allocated for paving streets, demolition, weed abatement, public infrastructure issues “and additional monies to support our land bank to make it more efficient.”

The Birmingham Land Bank Authority returns vacant, abandoned and tax-delinquent properties back to the tax rolls.

The proposed $451 million operating budget represents a $10.5 million increase over the FY2019 budget.

The budget includes money for:

Woodfin said he was happy to see money in the budget for the Birmingham Promise Initiative which combines secondary and post-secondary apprenticeships with college scholarships to steer students toward quality jobs. The program came under criticism from some who said the mayor was taking money away from city schools to fund the initiative.

“I know change is hard for people, but what I would like to say directly to every parent who has a child in Birmingham City Schools is the ability to give your child direct dollars from apprenticeships is a big deal, so what we’re supporting is workforce development and education,” he said.

Another area that deserved funding was the Real Time Crime Center, he stated.

“We set aside $1 million for a crime center that we will be able to outfit and build out which will allow us to integrate not only with our human capital but more technology in regards to being able to predict where crime occurs,” he said.

Councilor Hunter Williams said he was pleased the council and the mayor reached an agreement.

“I think there are a lot of good things in this budget, one of which is the real time crime center that Birmingham Police will be using,” he said. “We’re really focusing on core government and I think that this budget exemplifies that.”

Williams said citizens expect to have streets resurfaced; be able to pick up the phone and dial 911 and have a police officer or firefighter arrive timely; expect the city to pick up trash and perform public works. “This budget is very focused and it addresses all of those issues,” he said.

Councilor Steven Hoyt, the lone dissenting vote on both the operating and capital budgets, said the mayor and council needed more time on both spending plans.

Woodfin said the budget was different from previous ones because he engaged councilors on shared priorities and found money to support those.

Paving streets and pension were high on the list for a majority of the councilors, he said.

The FY2020 operating budget will go into effect once it is signed by the mayor.

The public can review the proposed operating budget and amendments for FY2020 at www.birminghamal.gov/budget2020.

The public can also review how the city spends tax dollars at https://data.birminghamal.gov/pages/transparency.