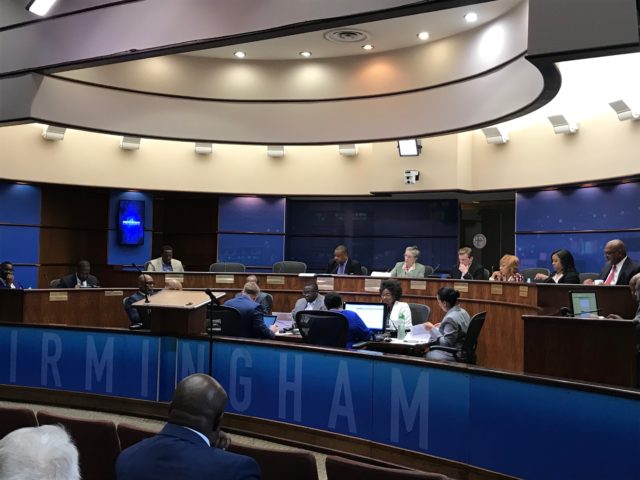 The City Council voted Tuesday on an agreement with the Birmingham Jefferson County Transit Authority (BJCTA) to use federal grant funds to purchase up to 15 new buses for the Bus Rapid Transit project.

The Council voted to approve $9 million in federal funds that will allow the BJCTA to purchase the new, low-floor, 40-foot, compressed natural gas (CNG) at $602,500 per bus.

The new bus rapid transit (BRT) system will connect 25 neighborhoods from Woodlawn on the east side to Five Points on the west side. The new system will replace the BJCTA’s MAX bus services that currently operate in these areas and the buses will operate in both dedicated lanes and in mixed traffic.

The $44 million bus rapid transit project is scheduled to begin construction of the 36 new bus stations along a 10 mile route this fall.

The new transit system will reduce travel time between Woodlawn and the Birmingham CrossPlex by an estimated hour travel time as opposed to the current hour and 20 minutes. The new buses will also provide level boarding for all passengers, operate on 15-minute frequencies throughout the day except for off-peak periods and weekends, which will be 30 minutes and will include wheelchair self-parking areas.

“Currently, on a fixed route you can anticipate your wait time to be anywhere from 45 minutes to an hour and with the on demand service a person will be able to call and request a ride and the driver will arrive within 15 minutes,” O’Quinn said.

“People need to keep their jobs,” he said. “A lot of people can’t keep their jobs because the public transportation they use can’t get them there on time. People need to be able to actually make their doctor’s appointments and not just get to the hospital so we have to look at this as a tool box when we’re adding additional tools to the tool box to . . . get our citizens from point A to point B.”

In addition to getting people to work, the system will enable residents to reach employment, educational opportunities, and health care and community services, especially for residents in low-income areas. The system will also allow visitors access to Birmingham’s rich historic and cultural locations.

Not only will it connect the Woodlawn Community and West End Community but will serve major employers along the way such as Integrated Medical Systems, the University of Alabama at Birmingham (UAB) and Brookwood Princeton Medical Center and be in place for the 2021 World Games in Birmingham.

The BRT is a partnership between the City of Birmingham, the U.S. Department of Transportation (USDOT), the Federal Transit Administration (FTA), and the BJCTA.  Once finished, the BTR will be a modern, enhanced transit line through Birmingham’s Jones Valley along the U.S. 11 corridor.