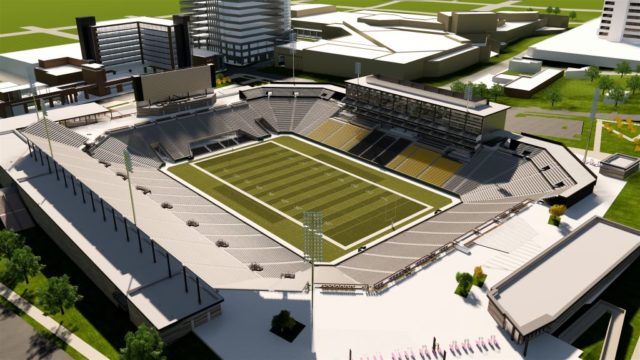 Designs for Protective Stadium were presented to the Birmingham-Jefferson Convention Complex (BJCC) board of directors at Wednesday’s regularly scheduled BJCC board meeting.

The presentation incorporated additional details of interior and exterior designs, the 45,000-capacity seating plan and a sun study to demonstrate sun patterns in and around the stadium at different times of day throughout the calendar year.

The designs were all provided by Populous, the world-renowned architectural firm hired to serve as lead architect on the project.

“I’m happy to be able to present these designs to our board,” said Tad Snider, executive director and CEO, BJCC Authority. “Each step in this process brings us closer to a completed stadium. The team at Populous are industry leaders in human-centered design and have done a wonderful job with this project. They’ve designed Protective Stadium with a clear understanding of what has worked well—and what hasn’t—for other facilities around the world.”

“We are building the next-generation stadium designed for the 21st century fans,” said Jim Swords, Populous Principal Architect on the Protective Stadium project. “We are facing a shift in what fans want out of their ticketed experience. For today’s sports consumer, it’s all about the experience, which is exactly what Protective Stadium will provide.”

“Populous has met and exceeded expectations at every turn, and we look forward to bringing our shared vision to life with them and all of the local partners on the project,” said Dennis Latham, BJCC Authority board chairman. “We are ready to move forward and continue with the rapid progress we have made thus far.”

Following Birmingham’s Design Review Committee approval of the stadium’s external materials on September 11, the next step in the construction process is the preparation of a comprehensive construction package. The package will be put forward for public bid later this year.

The University of Alabama at Birmingham (UAB) football team will be the $174 million multi-purpose stadium’s primary tenant, making Protective Stadium the home of the UAB Blazers, who will host home games in the facility beginning in 2021.

“We are so excited and thankful to everyone who has made this happen,” said UAB Director of Athletics, Mark Ingram. “I am thrilled for our fans who have waited so long to see our football program achieve the success we are capable of. This is a crowning achievement for everyone in the greater Birmingham area and something that we all will enjoy for years to come. Protective Stadium continues to put us in a position to win championships.”

“This is a monumental day for UAB Football and the entire city of Birmingham,” said UAB Head Coach Bill Clark. “Protective Stadium is a huge step in our vision of making this program a national contender every single year, and we would like to thank everyone who has made our future home possible. Birmingham is growing together and adding a world-class stadium in the heart of downtown will provide incredible value for our entire city.”

Populous is an award-winning, global architecture and design firm specializing in sports facilities, arenas and convention centers. With headquarters in Kansas City, London and Brisbane, Populous has designed facilities for Olympic and Paralympic host cities, as well as for professional sports franchises and major collegiate programs around the world, with more than 150 collegiate stadiums in their portfolio.