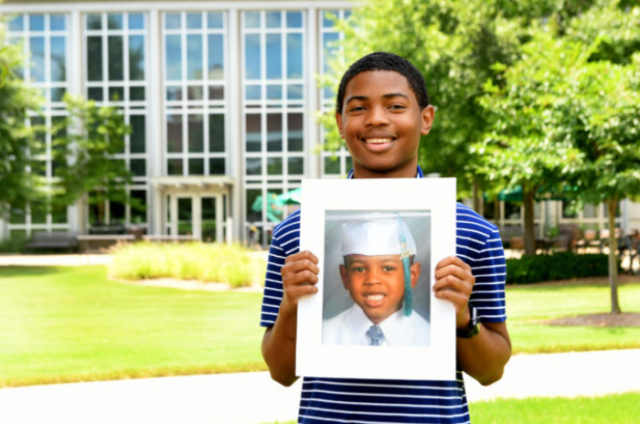 When others seem to be having a bad day, Cameron Thedford, a 20-year-old University of Alabama at Birmingham (UAB) student majoring in physical therapy, is usually the one who can get them to feel better.

The 2017 graduate of John Carroll High School in Birmingham was born with sickle cell disease in June 1999 with mild complications. As Cameron grew, he battled a bout of pneumonia and later suffered a stroke at age five. He spent a week in the intensive care unit as a result.

And once a month since age eight, Cameron and his mother, Carmesha, have a clinic appointment at Children’s of Alabama for regular blood transfusions and now red blood cell exchange apheresis, a nonsurgical therapy that removes and replaces a patient’s red blood cells. 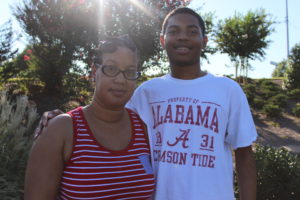 Cameron has also gotten blood infections from the apheresis which keeps him at the hospital longer. Cameron has had three including the most recent which kept him in the hospital for 13 days.

“Cameron has had his fair share of complications, but he has a quiet strength and a resilience that I don’t see in a lot of people,” said Kristen Osborn, his nurse practitioner for the past eight years. “He never let sickle cell hold him back or get in his way of accomplishing what he wants to accomplish.”

Cameron is already helping others who may feel down.

“There was a kid [in the hospital]…he was just really depressed about school and life because he was always sick and I just wanted to talk to him a little bit and cheered him up, we played Uno…and just talked and he said he felt better afterwards,” Cameron said.

His mother believes that her son would like to work one day with children. “I can relate to some of the stuff they might go through so I can just tell them everything is alright,” said Cameron, who likes to play basketball, hang out with his friends and 16-year-old brother, Dominic Hudson Jr.

After suffering a stroke at age five, Cameron spent a week in the intensive care unit.

“That was really scary,” said Carmesha, who went on to recall Cameron’s subsequent liver biopsies, gallstone removal and numerous other procedures. “Cameron doesn’t like to complain about anything. He’s always smiling, always happy. He never feels down because of his illness.”

Both Carmesha and Cameron credit their optimism to their Children’s care team, specifically Osborn and pediatric hematologist-oncologist Thomas Howard, M.D. “Up here they do the best they can to make you feel better. They look out for you,” said Cameron.

After his stroke his mother didn’t know how it would affect him.

“It didn’t affect his body physically, but the doctor explained because of the type of stroke he had it could affect his thinking ability . . . that would affect his school studies,” said Carmesha. “When I found that out I started giving him tutoring, in school, outside of school and it really helped . . . That makes him work even harder.”

Cameron began blood transfusions in 2006 at Children’s of Alabama which involves doctors or nurses going through the chest to take blood and give him blood simultaneously. He receives these transfusions once every four weeks, which can take up to a full day.

He’s also had seizures which have prevented him from driving for six months but he will resume on Sept. 13 and he’s excited.

“Whenever I’m in the hospital I just know I’m going to get better because I feel like they’re going to help me no matter what, they’re going to do their best and I just always think positively,” said Cameron. “I don’t like anybody to know I’m hurting because I say that I’m real strong about that . . . other than that, you wouldn’t really know because I’ll try to deal with it. I know pain is temporary and I’m going to get better.”

Osborn said she admires his strength because many people who have a chronic illness and complications requiring treatment once a month can become depressed “because they don’t want to live with the disease, they want to ignore it and pretend like it’s not there.”

“Cameron has kind of faced his head on and always dealt with things as they come and I just think that…it’s his strength for not letting  this disease keep him from accomplishing the things that he wants to accomplish in life,” Osborn said. “He is a very kind person as well. He always has a smile on his face and he is always very polite and just easy to be with.”

Cameron said his mom is a big part of how he keeps his spirits up, but she said he is the one who keeps her calm when he’s sick.

“He’ll tell me that he’s going to be ok, for me not to worry … he’ll tell me everything is going to be ok…’the doctor is going to take care of me. I’ll be good,’” said Carmesha. “I think so far I’ve done well considering he’s 20 years old, he’s been through a lot of rough stages in his life and as a single parent it can get hard but he never doubts anything, he never feels discouraged about anything, that’s why I think he’s done really well.”

Cameron said he also stays strong and positive for his brother as well.