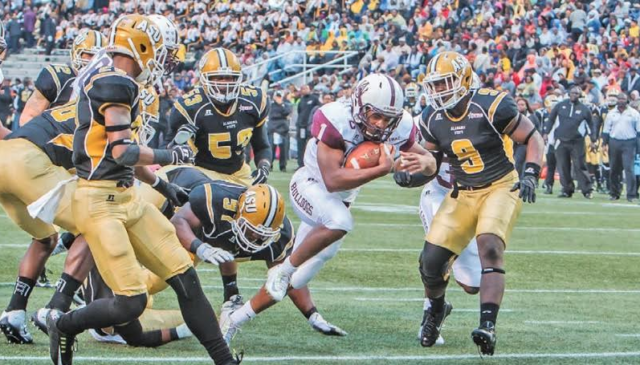 Money for the schools is parked in a public-service fund that contains $1.225 million for nearly two dozen organizations and programs.

The budget was passed by the five-member Jefferson County Commission by a vote of 3-2 in August; the fiscal year begins on October 1.

Commissioners in favor of the spending said the county benefits from the MCC and other items in the public-service fund. Those opposed to the budget wondered if some of the money in the fund could be better used in other areas.

Commissioners Sheila Tyson (D-District 2), Lashunda Scales (D-District 1), and Joe Knight (R-District 4) voted in favor of the spending plan, which includes $200,000 for the MCC—an event that has an economic impact of $20 to $25 million for the Birmingham area, said Tyson.

“That means every hotel [in the area] … is [filled],” she said. “I know a lady in a town called Corner that rents rooms [to fans]. People in Forestdale … rent rooms out. In Adamsville, I [personally know] five people that come out there and cook. You have to look at the economic value the [Classic] brings to people in Jefferson County.”

Knight said he wanted to look objectively at the spending for ASU and AAMU, both historically black universities and colleges (HBCUs).

“If it were [the University of Alabama versus Auburn University], we wouldn’t be having this conversation,” Knight said.

The Classic is the second largest event in Birmingham every year, behind the Honda Indy Grand Prix of Alabama race. Every hotel is sold out for three to four nights for the annual football game, and the Riverchase Galleria has probably “one of [its] busiest times, other than Christmas,” he added.

Commission President Jimmie Stephens (R-District 3) and Commissioner Steve Ammons (R-District 5) voted against the budget, saying more time was needed to review the spending plan. As for the public-service fund, Stephens said he’d prefer to see money going to programs within Jefferson County instead of schools in Montgomery, home of ASU, and Huntsville, where AAMU is based.

“The Carver Theatre [in downtown Birmingham] needs money. Red Mountain Park needs money. They are financially strapped for cash. It would be much wiser to place those dollars where they are needed and can remain forever in Jefferson County,” said Stephens, who pointed out the Carver did get $25,000 from the county, but it still needs more for renovations.

The MCC, he said, is a successful economic-development event that occurs “in the city of Birmingham” and distributes large amounts of money back to the participating institutions, both of which are “outside of Jefferson County.”

Asked about the economic impact of the game, Stephens said that happens with or without the county’s money: “If that $200,000 is given or not given, would that change the economic impact? … The answer is ‘No,’ and it never would be an issue with Alabama or Auburn because the county wouldn’t participate in that either,” Stephens said, adding that he does not dismiss what the game means to the area.

“I just think those dollars could be and should be spent on, … [say], the light show for Vulcan Park and Museum. Vulcan is our mascot for the World Games, [which will be held in Birmingham in 2021]. The [local] Kiwanis Club asked us for participation to help defray costs for the lighting, and we chose not to administer that.”

The commission agreed on a majority of the items in the fund, including $100,000 for the Birmingham Public Library Central Branch, $60,000 for Crime Stoppers of Metro Alabama, $25,000 for the Girls Scouts, and $35,000 for the Exceptional Foundation.

$250,000 for the Birmingham-Jefferson County Transit Authority

$60,000 for the Treatment Alternatives for Safer Communities (TASC) program, which is associated with the Jefferson County Drug Court

$50,000 for science, technology, engineering and mathematics (STEM) programs in schools

$35,000 for the Exceptional Foundation

$10,000 for the Arts Council of the Trussville Area (ACTA) Theater