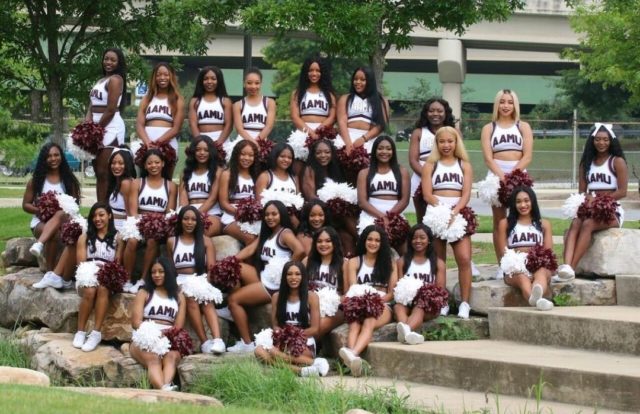 Hannah Brown knows that many people in her position would be nervous.

As one of the captains for the Alabama Agricultural and Mechanical University (AAMU) cheerleading squad, Brown will find herself in front of a crowd of about 60,000 people on Saturday, October 26, as her school takes on longtime rival Alabama State University (ASU) in the 78th Magic City Classic at Legion Field in Birmingham.

Brown won’t be nervous, though. She’ll be ready.

“Even at my first Classic, I wasn’t nervous because at practice we were consistent with the stunts, consistent with the cheers and dances,” said Brown, a junior who’s been cheering for the AAMU since her freshman year. “I was never nervous. I was more excited than anything to put on the best show ever for [AAMU].”

Just as the football team’s execution must be on point for the Classic, the cheerleading squad’s skills must be top-notch, too. While she and her cheer teammates work hard year round, Brown said their attitudes shift when preparing for the Classic. Cheer practices are more intense as the team works on new stunts for the big game.

“It’s not a normal game. It’s a big deal,” Brown said. “It makes me want to give my all. Not saying I don’t give my all at other games, but I feel that the more people are watching, the more you want to do better.”

AAMU and ASU are two of the oldest Historically Black Colleges or Universities (HBCUs) in Alabama.

“We understand that when it’s all said and done, we’re both HBCUs and we both are valuable to the state,” said Tammy Alexander, PhD, faculty advisor for the AAMU cheerleading squad. “But when it’s game time, it’s game time, and all of that is out the window until after the game is over.”

Asset for the Fans

Jennifer Gray, another AAMU cheer squad captain, believes cheerleaders deserve as much attention and respect as the football players and the band.

“We practice and work as hard as they do,” she said.

The cheer squad also works out with the athletic department’s trainers and travels with the football team for away games.

“We are athletes, as well,” Brown said. “We are a great asset to the fans.”

Alexander agreed: “Even when the band is not playing and if our team might be down, we’re still cheering no matter what,” she said.

During Classic weekend, the game is just one event on the agenda for the cheerleaders.

“When we leave [campus] on Thursday, we don’t stop from the time we get to the kickoff luncheon until the game is over,” Alexander explained.

In addition to cheering at the game, the cheer squad participates in the parade, cheers at the official Classic Kickoff, and gets the crowd pumped at special breakfasts and lunches planned for alumni and the teams throughout the weekend. They also host a pep rally at a local elementary school each year.

Brown believes her role as a cheerleader extends beyond pep rallies and the football field.

AAMU’s cheerleaders do community service, including participating in walks for causes like breast cancer research and awareness, Alzheimer’s research, and domestic violence prevention. They also conduct pep rallies at elementary schools, offer tutoring, and serve their institution by taking part in campus-cleanup events.

Giving back means a lot to Brown. After graduating from AAMU, the Memphis, Tenn., native hopes to attend dental school at Meharry Medical College in Nashville, Tenn., and eventually coach young cheerleaders in her hometown.

Though Brown may not get nervous before a big game, even one as big as the Magic City Classic, she admitted that hasn’t always been the case. When she tried out for the AAMU cheer squad she was “jittery” and wondered whether she had what it takes to cheer for a Southwestern Athletic Conference (SWAC) team. She wondered if the team would like her style. She knew her back handspring needed some work. And while high school had weeklong tryouts, for AAMU she had one day to learn and execute a routine.

“I feel that the nervousness made me want to do better in my tryout,” Brown said.

While she loves representing her school on the football field and beyond, Brown said what she enjoys most about cheering is how it helps her grow both as an athlete—her tumbling skills get better every year, she said—and as a person.

“Cheer has helped me be more outspoken,” Brown said. “Because I am one of the captains, I have to get my point across. I’ve learned to voice my opinion.”

Gray, a junior from Montgomery, Ala., who has also been on the AAMU squad since her freshman year, believes being a cheerleader also means being a role model.

“We live in a glass house, and everyone is watching us if we know it or not,” she said. “People look up to us, little kids look at us, even the people who want to try out the next year are watching us.”

This is something Alexander reiterates to her cheer team often.

Even in the spotlight, Gray said she loves cheering, which she started doing at the age of three.

“It’s my passion,” she said. “It’s sometimes challenging, but I like a challenge. You just have to do what you have to do.”