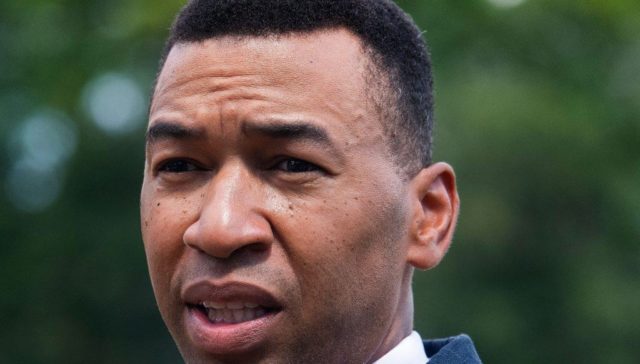 Alabama’s capital, a city once known as the cradle of the Confederacy and later the birthplace of the civil rights movement, elected its first African American mayor Tuesday.

Probate Judge Steven Reed, 45, clasped the history-making victory to be elected the next mayor of Montgomery after defeating businessman David Woods by a decisive margin. Reed won about 67 percent of the vote in Tuesday’s mayoral runoff, according to unofficial returns.

Reed said his campaign was built on a coalition focused on the city’s future and “all of the things that tie us together rather than those things that keep us apart.”

Reed was already the first black probate judge elected in Montgomery County and was one of the first to issue marriage licenses to gay couples in the state. His father, Joe Reed, is the longtime leader of the black caucus of the Alabama Democratic Party. Woods, who owns WCOV-TV, is the son of the late broadcasting executive Charles Woods, a perennial Alabama candidate for more than 30 years.

The city also played a critical role in the civil rights movement. City Hall is located not far from the church once led by the Rev. Martin Luther King Jr. and is also near the spot where Rosa Parks was arrested for refusing to obey bus segregations laws.

Reed will replace current Montgomery Mayor Todd Strange, who has served since 2009 and did not seek reelection.

“All these years and only having a white mayor, I think it’s definitely time that the city’s leadership reflects the city’s population, the communities here,” Montgomery resident Seth Levi told CBS News affiliate Alabama News Network.

Montgomery, a city of roughly 200,000 people, is about 60 percent black and has been losing population for years. Issues in the race included tackling crime, which Woods said is his top priority during a debate.