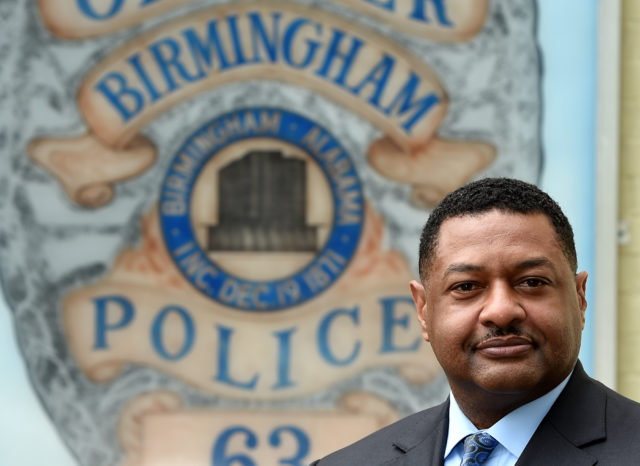 Birmingham Police Chief Patrick Smith said recently he was alarmed at the number of black males being killed in the city and plans to help address the problem with the use of data and engaging community partners.

Speaking to the Birmingham Association of Black Journalists (BABJ), the chief expressed his concerns even as the police department reports that crime has dropped in several key areas. As of November 5, homicides are down 9.1 percent, assaults are down 13.3 percent, robberies have dropped 18.6 percent, shot fires have lowered by 16.5 percent, total violence has dropped 14 percent and more than 1,700 guns have been taken off streets, according to the city.

However, the chief delivered another set of statistics that painted a grim portrait of what African-American males face.

So far this year 81 percent of homicides in the city included black males whether they were the victim or the suspect, chief said. That was up from 73 percent in the city in 2018. “That’s a lot of families, a lot of kids without dads, a lot of crying moms,” he said.

Smith said his department was doing everything they could to analyze the numbers “from those involved, [the] education level, who they were with, where it occurred…to resolve the issues, resolve the problems and have a greater level of understanding of what’s happening in our community and work collectively together to solve this problem.”

The numbers over a three-year period show, he said, that crime increases in June, July, August and September.

What do those numbers show? “We don’t have enough development of our youth [during the summer months], maybe we’re not targeting the right audience,” he said.

It’s not as much about enforcement as it is “reaching our youth at an early age, working with our men and women who are reentering society and having real conversations about what is happening,” he said.

Peace In The Park

One step his department, with the mayor’s office, has taken is the Peace in the Park initiative held over the summer at Legion Field and various other recreation centers which broaden relations between public safety officials and youth.

The initiative was a success and will be expanded next year, said Smith.

“With everything that we do, we have cause and effect, we can try what we’re doing and then we’re looking at the effect is has on our crime numbers, what’s going on in the city,” said Smith, who noted crime was down 33 percent on those days when the city hosted Peace in the Park “. . . we want to increase the community engagement component. Certain things are about what we can do to prevent crime and what we can do to develop programs on our own . . . such as playing basketball, we gave haircuts [at Peace in the Park], school supplies and things of that nature.”

If the violence is addressed by “encouraging kids, working with our youth and trying to provide some resolve, we can have an impact on 92 percent of homicides in the city of Birmingham,” said Smith.  “I’ve started a number of programs with our youth and been involved with our youth summit… but typically the kids who stay away from problems are the ones who come and participate. …We need the at-risk kids.”

Other steps taken have included a youth council and a partnership with Big Brothers, Big Sisters and about 40 officers mentoring in Birmingham City Schools.  “We know that by mentoring one child, it can lead us to another and another and having a greater impact,” said Smith.

The chief said he was pleased to see that crime has dropped in several areas. That could be a result of a number of factors, he said.

The department has also been successful in hiring more officers. When Smith started almost two years ago, the department was down 141 officers and has since hired 168 officers between 2018 and 2019, he said.

“Hiring has been one of our biggest successes, we buck the trend of the nation in terms of hiring,” said Smith. “The major problem in our system was the disconnect between our hiring, recruitment and our academy so I created a one stop shop and put them all at the Police Academy to create more of a mentoring program… hiring and recruitment and we see you all the way through to graduation.”

The department has also hired about 60 officers through their rehire program, an initiative that lures experienced cops back to the force.