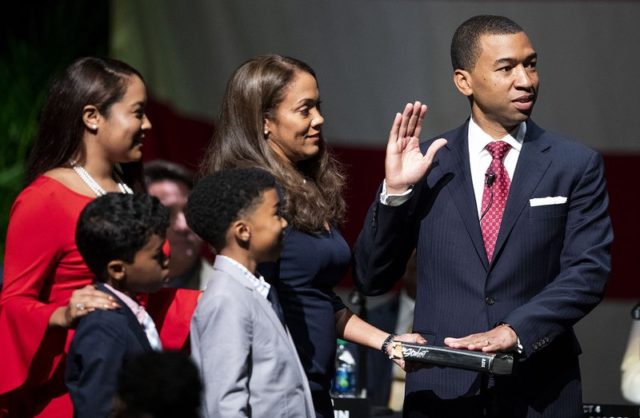 Reed took the oath of office after easily winning the mayoral runoff last month. He is the first black mayor of a city that was the first capital of the Confederacy and later the birthplace of the civil rights movement.

In a nod to his history-making win, Reed said his inauguration was an event that the enslaved people once sold on the banks of the Alabama River just a few feet from his inauguration ceremony “could only have imagined.”

“This is a culmination of those distant dreams,” Reed said.

Reed replaced outgoing Montgomery Mayor Todd Strange, who has served since 2009 and did not seek reelection.

Reed is the first black mayor of the city where Southern delegates voted to form the Confederacy in 1861. The city also played a critical role in the civil rights movement.

Montgomery was a city that led the fight for change, he said.

“This is why the son whose parents would not have been served in a local restaurant just up the street, and whose father led sit-in protests for equal treatment under the law can now take this oath and help write laws that apply equally to all,” Reed said.

Reed said Montgomery is a city with a “complicated past” and ongoing challenges.

The major said the city “must lay a new foundation for growth.”

“We must lay more fiber, pay our teachers and first responders their worth, implement apprenticeship programs, reinvest in our neighborhoods, and show a stronger commitment to strengthen the ties that bind us together.”

Reed was already the first black probate judge elected in Montgomery County and was one of the first to issue marriage licenses to gay couples in the state. His father, Joe Reed, is the longtime leader of the black caucus of the Alabama Democratic Party.