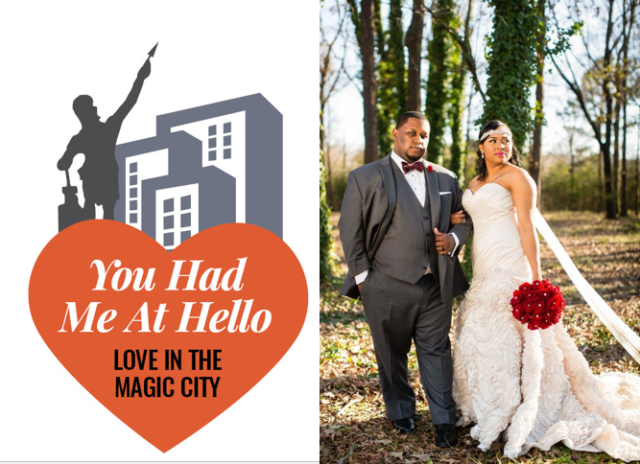 Met: January 2011 at Mount Moriah Baptist Church in Pratt City. Both were working a funeral for Westside Funeral Home in Fairfield when Cameron, a musician, was sitting in the band pit when he noticed Courtney assisting in the procession. They didn’t say anything to each other until after the funeral at the repast.

“He spoke and introduced himself, and we sat down and ate together,” Courtney remembered. “And then when it was time for me to leave, we exchanged numbers, but he never called… Neither did I, I wasn’t interested at first because I had [recently] been divorced and I wasn’t interested in dating.”

A few months later, Courtney’s boss from the funeral home [Dr. Bernard Williams] invited her and her young son to attend church where he pastored. Cameron also played at Dr. Williams’s church and spotted her in attendance.

“We started talking after the service, we exchanged some short words, and then a month later I visited the church again and he asked me out to eat…reluctantly I said yes,” Courtney said.

“I had more fun than I expected, we did a lot of laughing and joking, we learned the friends we had in common. He joked on my high school, we talked about college and realized we were there at the same time. We were there for hours,” Courtney said.

“The thing that intrigued me the most was how interactive he was with my son,” Courtney added. “He wasn’t ignoring him or shunning him off to pay attention to me, he was talking to Jason and answering his questions…he played tic-tac-toe on the menu with him, it was nice. That was the thing that interested me the most about him was how he was treating my son.”

The turn:  One month later the couple started dating. “He told me soon after we started dating ‘you know you gonna be my wife, right?’ and his sister, Ashley, agreed and it freaked me out because I vowed never to marry again, so I drove off,” Courtney laughed. “But, we moved in together March 2012, mainly because after that first date, we started seeing each other every day… I said it doesn’t make any sense for us to have separate households when we’re always together.”

Cameron said, “It felt like God really was putting together the pieces of our lives like a puzzle. It was sequenced …it moved fast, but the faster we moved, the more natural it felt.”

The proposal: New Year’s Eve, 2013, at Sibyl Temple in Vestavia Hills on top of the hill. “It was a big day, she thought we just had dinner reservations. I had been planning from August of 2013 [how] to propose so, I set it up for the last day of the year because I knew it was a busy day for us… I went over to her mother’s house and asked her for her daughters’ hand in marriage. I reached out to my good friends Logan the Entertainer and Alvin Garrett of ‘Just a Few Cats’, and set up for them to sing our song ‘Love on Top’ by Beyonce. We [were running errands] and as we were passing [Sibyl Temple], I said ‘hey look up there, let’s stop over here for a second…and as we approached the place, she started hearing the music, and it was like her feet became 30 pounds heavier… and once she [heard] Logan singing, the tears started flowing and when she turned around I was on one knee,” Cameron said.

“I was surprised. I knew it was coming but I didn’t know when… but when I got out the car and heard the acoustic band, I knew what was going on… I started thinking about the pictures and my hair, and my nails ain’t done…I listened to the band for a minute and when I turned around he was on one knee proposing… I felt loved and optimistic about the future . . . I felt like it was right,” Courtney said.

What made her smile the most was their family’s presence and knowing her mom was in on it. After the proposal, the couple had a surprise engagement party at SUMO in Hoover.

The wedding: More Than Conquerors Faith Church, and it was officiated by Cameron’s Father William Sankey Jr. Their colors were black and white with red accents.

Most memorable for the bride: “The text I got the morning of the wedding [from the groom]. I was at a hotel…I wasn’t a ball of nerves or anything, but [the text] made me feel assured… it said, ‘I can’t wait to see you and I’m so excited we made it to this day… I had not talked to him since the day before at the rehearsals because we said we weren’t going to talk or see each other again until we got to the altar, so it was comforting to hear from him,” Courtney said.

Most memorable for the groom: “Them opening the doors to the sanctuary and me seeing her for the first time…. It made the moment complete, she was the answer to everything in my life and she was walking down the aisle to marry me and make me whole,” Cameron said.

“It was great to be somewhere where he wasn’t working. That was our first trip that wasn’t centered around his work. We didn’t have the kids, it was just us. Even though while we were there he was still looking for a piano,” Courtney said

“I found my piano, too,” said Cameron.

Words of wisdom: “A lot of people say communication is key, and it is, but it’s more about the listening part of communication. Be a good listener, hear your spouse out. You have to listen to understand, not necessarily to respond,” Courtney said.

She added, “there’s no such thing as a marriage without obstacles. Being able to be patient and willing to work through them is key. A lot of time obstacles are prolonged because one or both people are not willing to forgive. The Bible says to be quick to forgive.”

Cameron said, “The root of having a happy marriage is understanding your right to choose. I wake up every morning and I choose to love the person that I have in the bed with me. I choose to love her for her imperfections as well those things that go perfectly right in her life. I choose to be there through the good, the bad and everything in between . . . Not being perfect means people will make mistakes, people will do something wrong, that’s life. You have to be able to forgive and say I’m sorry.”

Happily ever after: The Sankeys have five children: Justin, 13, and Isaiah, 9 from Cameron’s previous relationship, Jason,11 from Courtney’s previous marriage, and daughters Isabella-Grace, 3, and Olivia, 1 from their union.

Courtney, 34, is an Ensley native and Fairfield High School grad. She attended Miles College, and earned a bachelor’s degree in biology, and works as the Associate Director of Student Success at Miles College.

Cameron, 36, is an Ensley native and P. D Jackson Olin High School grad. He attended Miles College where he studied music, and is a full-time professional musician and producer. He is CEO of his own company Playworx Music Group. 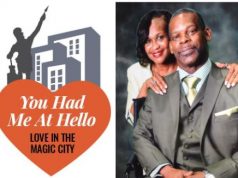