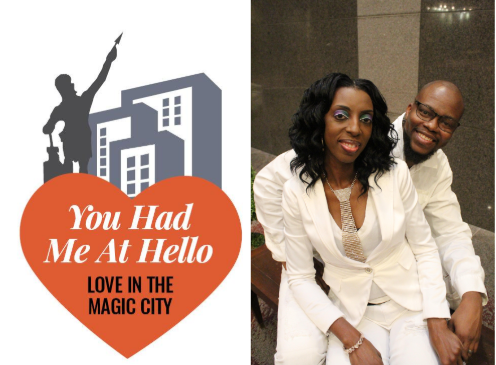 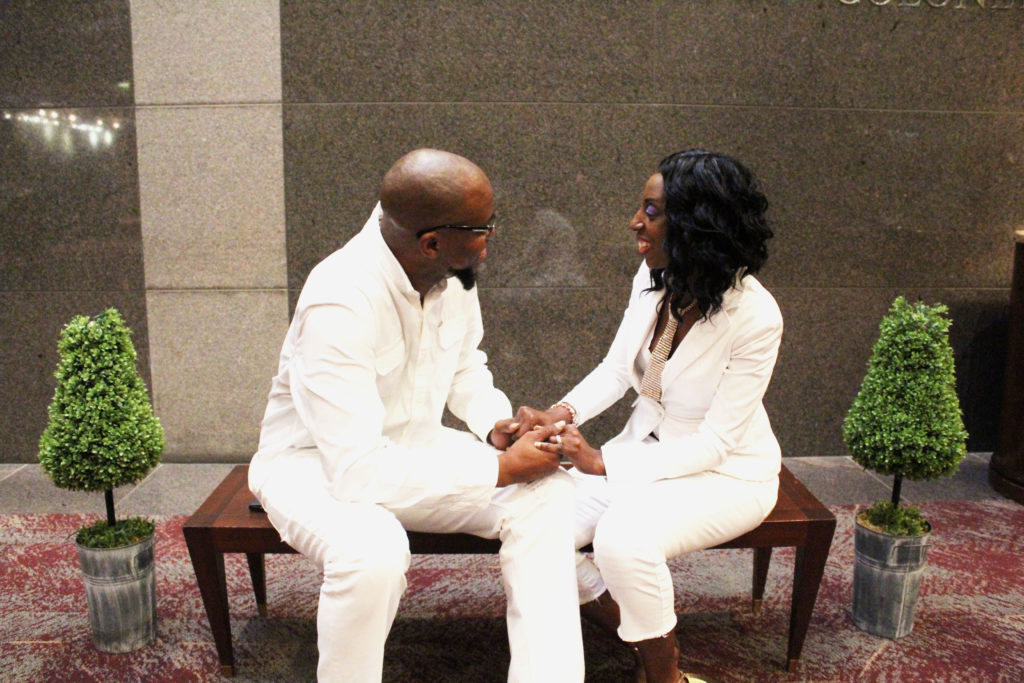 Met:  Pamela and Sam met in September of 2011 on a blind date. They were set up by Pamela’s friend Ann, who is Sam’s sister, and who thought the two would make a good match. They met at the Trussville movie theater to see the Christian film “Courageous” with Ann and her husband. Pamela recalls feeling nervous about meeting a guy she had never seen and knew nothing about.

“I had never been on a blind date before and this was a true blind date. I’d never seen pictures of him, he’d never seen me, we had never talked on the phone before… I rode around thinking what if he’s ugly, what if he thinks I’m ugly, if he is, I’m just gonna pull off.”

When Pamela didn’t see Ann she parked, stood outside in line and saw 6’7 tall “good-looking” man walk up behind her. “I was thinking ‘Lord, God, please let that be him’ and Sam said he was thinking that too,” Pamela laughed. “Then his sister finally came out and said ‘Pam this is Sam, Sam, meet Pam’ and we all started laughing, and we’ve been laughing ever since.”

Sam almost didn’t go on the blind date that night, but his sister said ‘boy you better get your butt up and get out of the house’, and so I went. I’m glad I did,” he said, “she’s awesome, we hit it off real good and after the movie, we stood outside for an hour talking and we exchanged numbers.”

First date: Two weeks later the pair met at East Lake Park and rode around the city to get to know each other better. Although Pam was 38 at the time, and Sam was 36, she recalled feeling girlishly nervous being out and alone with Sam.

“She was real shy, and when I was trying to talk to her she kept looking outside the window, so I had to park and get out the tuck and go on the other side just I could talk to her,” he laughed. “She was like that until she got comfortable with me, but it was great. She made me smile a lot and I had waited a long time for a woman like her…I thank the Lord for bringing her to me.”

Pam said “it was just nerves… at the time I was celibate, I hadn’t been dating for nine years, so I was trying not to look at him. I didn’t want to feel no feelings or temptations. I was a woman of God, in ministry, so you know they tell you you’re not supposed to be nowhere alone with a guy and I was smelling his cologne… I didn’t know what it was like to have to resist temptation and have to fight feelings… It was a relief that I could relax around Sam, and that he didn’t want anything from me.”

The turn: “My sister Ann told me that my next girlfriend was going to be my wife and she was right…,” Sam said. Pam was invited to his family’s Thanksgiving dinner and was loved by the whole family.

“His dad is the guy that tells his kids ‘don’t bring me your girlfriend/boyfriend, I want to meet your [spouse],…,’” Pam said, “and [his father] is real strict about who he lets into his office where he studies [for his sermons] and he invited me into his study (and nobody goes into his study but his wife)…when I got up to go in there, everybody said ‘oh that’s his wife’. His [family] constantly reminds me that I’m the best thing that’s ever happened to their son.”

The proposal: In April, 2012, Sam proposed to Pamela at his home.

“She was sick, and she came over to my house and I was taking care of her. She was dozing in and out of sleep from the meds while we were watching ‘Coming to America’… and I put the ring on her chest three times and took it off three times before I left it up there and let her catch it. She thought she was dreaming and seeing things… she would crack her eyes and thought she saw something and by the time she’d open them again, it would be gone. On the third time, I left it up there and asked her would she marry me,” Sam said.

“I was laughing so hard and cheesing from ear to ear, it was finally my time…I was thanking God, and thanking him…it was breathtaking, I finally had that moment in the movies, it was like ‘wow, he chose me.’ I took pictures of the ring and sent it to everybody I could send it to,” Pamela said.

The wedding: At the Harbert Center downtown Birmingham officiated by Pastor Reginald McClellan of Discipleship Ministries and his dad, Reverend Samuel Banks Sr. The colors were apple green, purple, and Ivory. Sam made all the decorations.

Most memorable for the bride was the audio recording she made her entrance to. “I made a special recording of me talking to Sam to start playing as I was getting ready to come down the stairwell and walk down the aisle…hearing that play and seeing Sam at the other end at the altar crying was so special to me,” Pam said.

Most memorable for the groom was when reality hit. “I thought I would never see this day, so when I was watching her come down the aisle it brought me to tears, the love of my life was coming down the aisle to marry me,” Sam said.

Words of wisdom: Submission, dedication and strong faith in God are what sustains their marriage, and marriage is a ministry, said the Banks.

“As a married couple, number one being honest and having somebody that you can trust brings security,” Pamela said. “My husband offered me security when we got married and that was one of the things I was looking for in a man, and he makes sure I’m covered. He covers me in prayer, I cover him and we cover one another in every area. Knowing how to listen to one another is a key to good communication and embracing one another’s [views]. One on one time together as husband and wife, you have to keep dating, it keeps the ministry of your marriage growing… also, submission.  When it [the Bible] says to submit, I get underneath my husband and lift him up in every area. It doesn’t mean that he rules over me, it means we build together. I’m here to make sure that his dream is fulfilled and he’s here to make sure mine are….”

“You have to be dedicated to one another and have submission to one another,” Sam said. “You would want someone to treat you the way that you want to be treated and that’s with respect. Be caring, honor your wife, and keep God first and be faithful towards one another.  Keep doing what you did to get her, you got to do it to keep her. It’s a continuation, you got to keep going.”

Happily ever after: Pamela, 45, is a Kingston native and graduate of Woodlawn High School. She attended Lawson State Community College where she earned her Cosmetology License. She is a Master Cosmetologist at A & P Next Level Salon in Center Point and mother of 27-year-old daughter, Kenyata, from a previous relationship.

Sam, 43, is a Collegeville native and graduated from George Washington Carver High School. He attended Lawson State Community College where he earned an associate’s degree in culinary arts. He works as a contractor for Alabama Power Company.