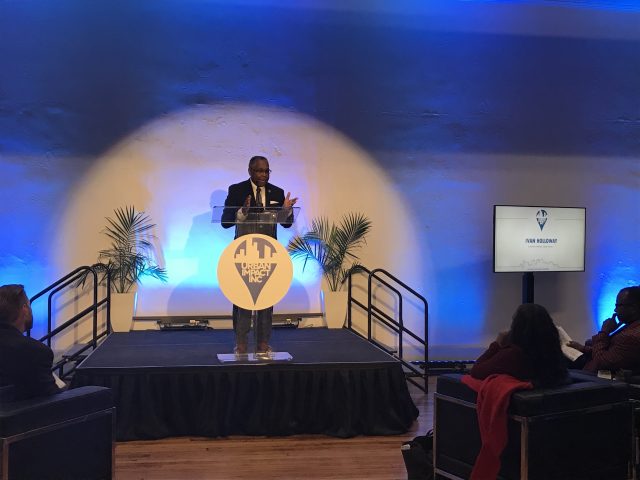 Two organizations focused on revitalization and economic development will partner to advance growth in downtown and connect historic neighborhoods that have been separated from the city center due to the interstate.

Urban Impact and REV Birmingham will collaborate on growth in the Civil Rights District, Innovation District and surrounding northwest quadrant of downtown Birmingham, said officials during an announcement at the Alabama Futures Fund, which focuses on economic development in the state.

“As the driving organization for the Innovation District, REV is committed to a growth that is in lockstep with the Civil Rights District because each district’s growth should complement each other,” said REV Birmingham President and CEO David Fleming.

“This plan will help people who feel a sense of ownership over these areas benefit from the district’s growth while also allowing room for new stakeholders to become part of the area as well.”
Ivan Holloway, executive director of Urban Impact, said a plan is underway to guide future development for both districts.

“We realized that we needed a strategy that really coalesces everyone together and we believe that announcing this opportunity for a planning firm to come in and [complete] a master development plan for this defined area will create that kind of vision that we believe everyone can support and buy-in,” he said.

The announcement comes after the release of a Northwest Downtown master development plan that ensures both districts are grown together. The plan also focuses on building linking neighborhoods adjacent to the City Center, such as Smithfield and Fountain Heights, that have been separated by the interstate.
Redeveloping the area is crucial, said Holloway.

“When we think about the Birmingham Civil Rights Institute, Sixteenth Street Baptist Church, who already gets international visitors, the more we talk about Civil Rights, diversity, a strong community, Birmingham represents historically that whole conversation,” he said. “We believe that having a very strong district that represents the values of Birmingham is extremely important.”

Last month, Urban Impact unveiled plans for the “Freedom Walk”, a vision to link the Civil Rights and Historic 4th Avenue Business Districts with the Birmingham Civil Rights National Monument and build a vibrant community where people can live, work and experience history.

While Urban Impact has been leading economic growth for the Civil Rights District, REV Birmingham has served as the economic engine for the Innovation District, an emerging tech hub for technology, startups and entrepreneurs that serves as home to more than 100 startups in downtown Birmingham.

2020 plans for the Innovation District will also include a rebrand and more catalytic redevelopment projects to come, with continued partnership between REV Birmingham and Urban Impact throughout these efforts.

Local residents and business owners are encouraged to learn more about the Northwest Downtown master plan and voice their input by visiting www.northwestdowntownbham.com.