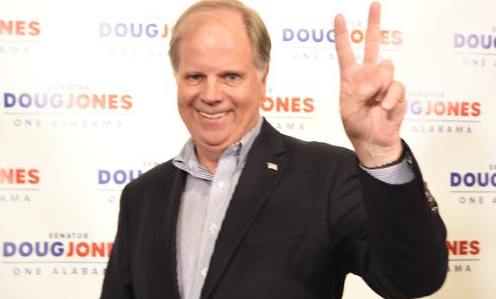 Held inside the Hart Building at the U.S. Capitol in Washington, D.C., the engaging hour-long conversation marked the first time that a sitting U.S. Senator sat down for a live-streamed video with the Black Press of America.

During the discussion, Jones said that voter turnout – particularly that of African Americans – was crucial to his stunning upset of Republican Roy Moore in the 2017 Alabama Special Election.

“The right to vote was hard fought for African Americans in this country, and I think too many people take that for granted. I think we proved that in the special election in 2017, that every vote counts,” said Jones.

Jones said voting rights had been under attack since the 2013 Shelby V. Holder decision, which eliminated a lot of voter protections.

“It’s not the same as the old Jim Crow laws, but there’s still efforts out there to suppress votes and keep people from having that free access to the booths,” he stated.

Jones noted that he’s working to restore “teeth” in the Voting Rights Act, but doubts that the current GOP-led Senate and President Trump’s administration would approve.

“I don’t see it happening, so it’s all the more important to get out and vote in the 2020 elections,” Jones stated.

Chavis asked Jones about the role Black women played in his winning election to the Senate.

“It was critical. We focused on making sure that we got the African American vote out,” Jones stated.

“We did get more African Americans as a percentage out than even when President Obama did in his first race, a fact that I was very proud. The Black community came out and worked hard. It’s community engagement; it’s a 365-days a year job. And, that’s why the Black Press is so important because it keeps the community engaged,” he stated.

“It was incredibly important. When it comes to federal dollars, there are two pots of money HBCUs get: Mandatory funding and discretionary funding,” said Jones.

“The mandatory funding is absolutely critical so they can plan each year. There’s a lot of budgetary tugs that fought us, it wasn’t easy, but we were just persistent, and that’s the key in legislation in Washington, to be persistent,” he noted.

“So we were able to get that mandatory funding so that a base amount of money would go to HBCUs. In my two years in Washington, we have been able to get about a 30 percent increase in discretionary funding for HBCUs and other minority-serving institutions.

“Providing that base is important to them and the economy of states like Alabama and North Carolina, and others.”

Chavis spoke to Jones about race relations and asked about the senator’s forecast for the South and whether he sees a more inclusive and diverse South rising.

“So many of the divisions we see in the country started in the South. It can also be a place of healing and bringing people back together, and I see tremendous opportunity in the South,” Jones stated.

“I think my election was something that people looked at and said the South was changing. The demographics are changing to some extent, but I think people’s hearts and minds are changing,” he added.

“We went from a one-party state in Alabama with Democrats, to a one-party state with Republicans. There was never anything in between. When you get competitive political parties, you get people who have to talk to each other, and that’s what you need.

“These young people coming up don’t have the same kind of biases and prejudices you saw when I was growing up. They also are beginning to see that the state is better off when everybody in that state benefits from it. I think the South can lead the nation in healing.”

Jones also spoke of the importance of closing the achievement gap, although he said it’s a complicated issue.

He said education and getting broadband into rural communities are keys to helping close the gap.

The senator also noted that he’s a proponent of raising the federal minimum wage, but conceded it couldn’t be done overnight. He stated that Trump’s 2017 tax cuts have helped to provide businesses with the needed resources to make a minimum wage hike possible.

With climate change a serious and growing issue, Jones stated the importance of the Black Press to continue to cover topics of environmental justice.

“A lot of work needs to be done,” he stated.

“But, I don’t have much confidence in the Environmental Protection Agency under this administration, which is why the 2020 election is very important.”

He included farming and Trump’s trade and tariff wars as other vital issues for the 2020 election cycle.

Jones concluded the chat by noting the critical role of the Black Press, his disappointment in mainstream media, and his message to veterans in the wake of the new conflict with Iran.

He noted his appreciation for the U.S. military.

“I’m going to do everything that I can to continue to show appreciation. We eliminated the military widow’s tax … we’ve got to demonstrate our commitment in more words … we’ve got to put our words into action,” Jones stated.