Women across Alabama have enormous power that should be used to bring about change, even if it means coming up with creative ways to address pressing issues, said state Sen. Vivian Figures, D-Mobile, during a panel discussion of women leaders last week.

“There are things we are going to have to do, just like the women banded together to get the right to vote, maybe we need to look at some things outside of the box,” Figures said. “Women have so much power; we just don’t use it. We’ve got to come together and strategically plan what we need to do to fight these issues that affect us.”

Figures spoke Friday during the panel discussion, “Women for One Alabama,” hosted by the Campaign for Doug Jones for Senate 2020. Terri Chapman, national vice president of the Young Democrats of America, moderated the panel, which included Birmingham City Councilor Crystal Smitherman, civil rights activist and author T. Marie King, and Jarralynne Agee, Special Assistant to the President at Miles College.

Figures, who was the second African American woman elected to the state Senate in 1997, replaced her husband, Michael Figures, who died in 1996. In 2008 she became the first woman and first black to win the Alabama Democratic Party nomination for the U.S. Senate where she ran unsuccessfully against Republican Sen. Jeff Sessions.

“My husband was the first African American elected and was president pro tempore in the Senate, and I said, ‘I am not qualified to do this,’” Figures said. “It took our 7-year-old son to tell me, ‘But Mommy, you’re the only one who can take daddy’s place.’ … When I got to Montgomery and saw who else was there, I said, ‘Hell yeah, I can do this.’ A reporter asked me how I was going to fill my husband’s shoes, and I said, ‘My husband wears a 10.5. I wear a 7.5. I brought my own shoes.’”

Smitherman, 26, the youngest member of the Birmingham City Council, said she didn’t wait to pursue leadership roles, and other young women shouldn’t either.

“I saw that there needed to be a change, and I thought, who else was going to do that,” she said. “What would Birmingham have been if I had stepped back, finished law school, passed the bar, become an attorney, and I see all the needs in my city, and I don’t give a voice towards that?

“When you are in public service, it’s not about you; it’s about the constituents,” Smitherman said. “It’s not about the fame or the money. … If Martin Luther King Jr. had waited, we wouldn’t be here. He was young when he led the movement. … We as millennials are a large demographic, and if you feel like your voice isn’t being heard, you can have a voice and be that for your generation.”

“The future of women and women’s leadership is honoring the legacy and helping those who are there now. In working with Bobbie Knight [Interim President of Miles College] something that she has done for me is helping me to see how influential I can be as a leader,” Agee said. … “It also helps me grow. I think One Alabama looks like us doing more of that. One Alabama looks like when you don’t forget about the women … our community, and you make sure that everyone comes along.”

As a community and civil rights activist, King said it is important to find like-hearted people.

“It’s so easy to look with your eyes and your mind to easily find the differences and continue our lives, but when we look like-hearted, we’re able to see what we do have in common and what we’re actually striving towards,” said King, author of “Six Simple Keys to Living a Lifestyle for Forgiveness.”

“I think we have to find like-hearted people so that we can work to change our state and our nation,” she said. “I think the answer to this society is in this room and other rooms, but we actually have to be the ones to support each other. We’ve got to start showing up for one another, when we do that, we can truly embody that One Alabama.”

Updated at 6:33 p.m. on 1/28/2020 to correct the title for Jerralynne Agee and the election of Vivian Figures to the state senate. 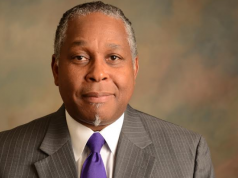