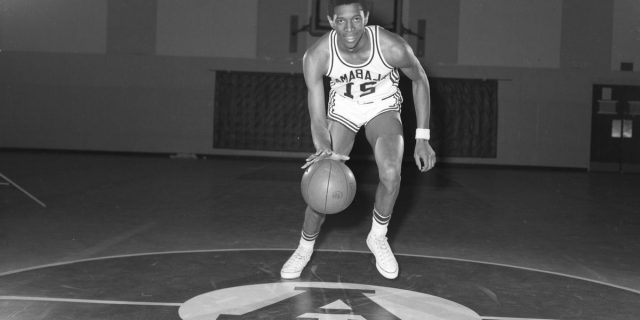 Fifty years ago, Wendell Hudson stepped foot on The University of Alabama campus as its first African American scholarship athlete, helping to open doors for generations to come.

To honor him and his legacy, Alabama Athletics will welcome back Hudson on Saturday, Feb. 15, and hold a halftime recognition and jersey retirement at the men’s basketball game versus LSU.

While the number 20 will remain in circulation, Hudson’s jersey will become the first in Alabama Athletics’ history to be retired.

In addition to the jersey retirement, a men’s basketball scholarship has been endowed by a donor in his honor and student-athlete uniforms will be adorned by a WH patch for the remainder of the winter and spring sports seasons.

Not only a trailblazer off the court, Hudson made his mark on the court and remains one of the most decorated student-athletes in Crimson Tide men’s basketball history.

He was recruited by the late C.M. Newton after a stellar prep career at A.H. Parker High School in Birmingham and went on to become a member of the freshman team at Alabama during the 1969-70 season before joining the varsity ranks for the next three years. For his career, Hudson recorded 1,768 points and 1,197 rebounds across his 93 games played for an average of 19.0 points and 12.9 rebounds.

In 1973, Hudson was named a Helms Foundation First Team and Converse First Team All-American after averaging 20.7 points and 12.1 rebounds as a senior. That same season, he became Alabama’s first Southeastern Conference Player of the Year, leading the league in scoring. Hudson helped the Tide secure a second-place finish in the SEC and make its first postseason appearance in program history, advancing to the semifinals of the NIT.

Hudson was selected in the second round of the 1973 NBA draft by the Chicago Bulls and also played for the ABA’s Memphis Tams. He was inducted into the Alabama Sports Hall of Fame in 2001 and was honored as an SEC Legend in 2000. Hudson was also recognized in 2000 by The University of Alabama with its Paul W. Bryant Alumni-Athlete Award, which recognizes former athletes whose accomplishments since leaving UA are outstanding.